In this series, Vulture has been speaking to the screenwriters behind 2013’s most acclaimed movies about the scenes they found most difficult to crack. What pivotal sequences underwent the biggest transformations on their way from script to screen? Today, writer-director Ryan Coogler discusses a key scene in Fruitvale Station, his fact-based drama about the last day in the life of Oscar Grant (Michael B. Jordan) before he was shot and killed by a BART police officer, leaving behind his grieving girlfriend, Sophina (Melonie Diaz). The scene is then excerpted below.

I have a bunch of tough scenes that fit the bill, but the scene that probably went through the most versions was the scene between Oscar and Sophina where Oscar confesses to losing his job. It was the very first scene of the shoot, this intimate scene between these two characters, and the first version I had written just didn’t feel right when the actors did it together.

I tried some improv with Mike and Melonie, and that started to help, but I had to go back to the actual Sophina for inspiration, to ask her about what she and Oscar went through. Something she said to me and Melonie that was really helpful was, “Me and Oscar were homies. We were best friends before we started dating.” She said that still, to this day, she finds herself wanting to text message him when she wants to share good news. Not everybody can say that about their romantic partners, that this person I love is also my absolute best friend. So when we went back and did the scene, they played it like Oscar was letting his best friend down, and the scene made more sense.

This scene is incredibly important, especially to Melonie’s character. I always saw Sophina as the role that’s closest to the position of the audience: She was the person who had the most riding on Oscar and was obviously the most intimate with him out of the three women in his life, the other two being his mom and his daughter. She can tell when he’s not being truthful, or when something is eating at him, but she’s really frustrated with him at the same time. There are so many important things she has to nail in this conversation.

I try not to be precious with my words at all, you know what I mean? Being both the writer and director gives you a lot of freedom to rewrite the scene constantly, and when you’re dealing with actors, you’re working with other talented artists like Michael B. Jordan and Melonie Diaz. You always want to make sure that it feels right for them. 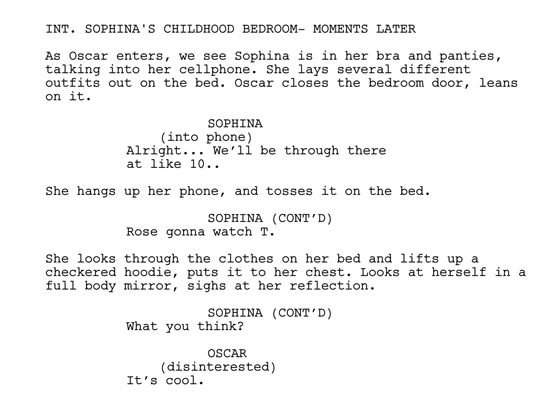 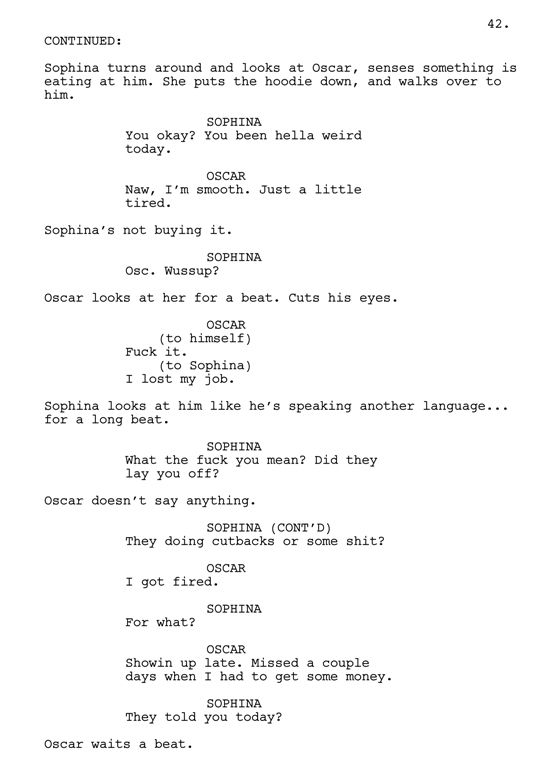 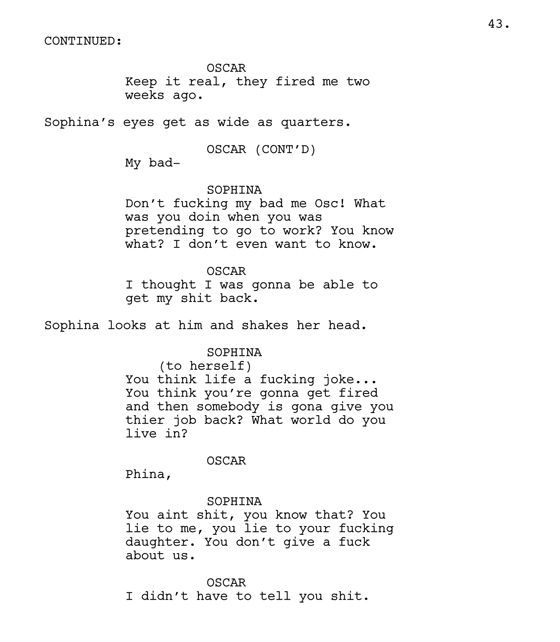 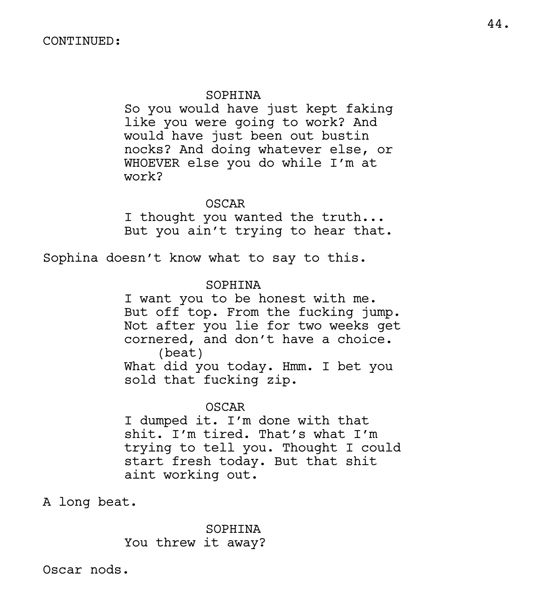 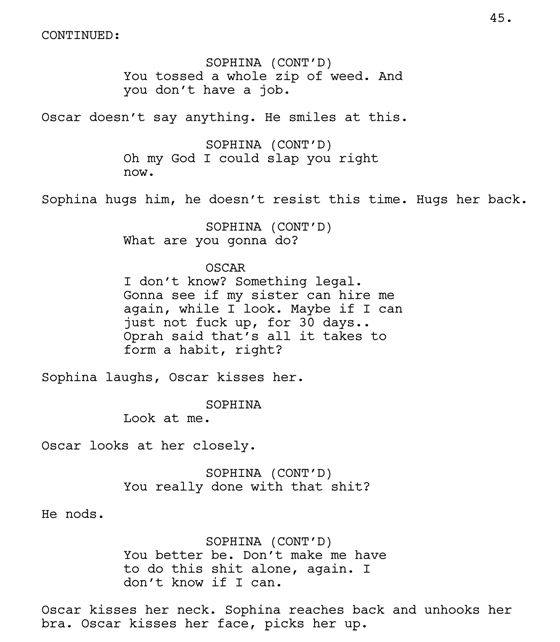 overnights 3 mins ago
Gossip Girl Recap: Exhibition at the Guggenheim Don’t spoon-feed us lessons on friendship. It’s Gossip Girl, so let’s focus on the gossip!
cancellations? 1:38 a.m.
Wait, Did Gal Gadot Jinx Wonder Woman 3? A day after she said that she was excited to share Wonder Woman’s “next chapter,” the movie is reportedly no longer moving forward.
trust me Yesterday at 11:51 p.m.
Black Adam Didn’t Do That Bad, Says Black Adam Star The Rock He said he confirmed with financiers that the movie will actually make a profit.
freaky friday Yesterday at 10:08 p.m.
Just Imagine the ‘All Too Well’ Short Film (Guillermo’s Version) Taylor Swift would like to swap places with Guillermo del Toro for a day.
overnights Yesterday at 9:07 p.m.
The Real Housewives of Salt Lake City Recap: Charcuterie Overboard People in glass houses shouldn’t throw shoes.
autopsy Yesterday at 8:13 p.m.
Anne Heche Wasn’t Drunk or High During Car Crash, Coroner Says Her official cause of death has been determined to be inhalation and thermal injuries.
let's go party Yesterday at 5:52 p.m.
Greta Gerwig’s Barbie World Keeps Getting Bigger Ken we talk about Ryan Gosling for a sec?
boston voice: wicked! Yesterday at 5:49 p.m.
Thank Goodness, the Wicked Movies Are on the Way What is this feeling? Oh, yeah, excitement.
alien superstar Yesterday at 4:52 p.m.
Avatar 2 Will Show Us the Way of the Weeknd His song for The Way of Water soundtrack drops December 15.
news from shondaland Yesterday at 3:29 p.m.
Grey’s Anatomy Scammer Elisabeth Finch Wants to Write on Handmaid’s Tale Next After admitting she “never had any form of cancer.”
buzz! buzz! Yesterday at 3:04 p.m.
It’s Almost Yellowjackets Season Citizen detectives, there’ll be a break in the case on March 24.
1.5x speed Yesterday at 2:17 p.m.
Bad Men, Weird L.A., and 8 More Podcasts Worth Checking Out Welcome to the Night Vale team’s latest world.
dolls kill Yesterday at 2:09 p.m.
Robot Renesmee Hits Some Choreo in M3gan Bolstered by her viral success, M3gan is coming for your necks, your wigs, and an innocent old woman.
gma3 goss: what you need to know Yesterday at 2:08 p.m.
Every Detail of T.J. Holmes and Amy Robach’s GMA3 Drama in Chronological Order There has been an embarrassment (and we do mean that word) of detail.
sundance 2023 Yesterday at 1:01 p.m.
Cat Person Has a Date at Sundance Film Festival 2023 As part of the lineup for the in-person and online programs.
real boys Yesterday at 1:00 p.m.
Pinocchios, Ranked What is it about this little wooden boy that’s resonated for 150 years?
my single is dropping Yesterday at 12:23 p.m.
Did You Know That There’s a Lana Del Rey Album Coming Next March? Did you know that there’s a tunnel under Ocean Blvd features Bleachers, Father John Misty, and her pastor.
vulture 10x10 Yesterday at 12:08 p.m.
The Memory Puzzle 9-Across, Nine Letters: Clarice Starling and Gracie Hart.
best of 2022 Yesterday at 11:30 a.m.
The Best Songs of 2022 This year’s music provided a fleeting and desperately needed moment of salvation.
broadway bye-byes Yesterday at 11:26 a.m.
KPOP to Close on Broadway Two Weeks After Opening The final performance will feature a panel on AAPI representation on Broadway.
More Stories