Over a year ago, we first heard that Tolkien superfan Stephen Colbert was going to cameo in one of The Hobbit movies. Then, earlier this month, Colbert confirmed on Letterman that he was in the second film, The Hobbit: The Desolation of Smaug (a.k.a. The Hobbit 2: Erebor Nights), which came out on December 13. He compared his role to that of Waldo in the popular Where’s Waldo? book series. Well, a sharp-eyed Redditor spotted Colbert as a Lake-town spy. You can see what he looked like below. Sure, we are excited for him, but we were hoping he’d show up at a candy-cane store, standing near a short person in the same outfit. 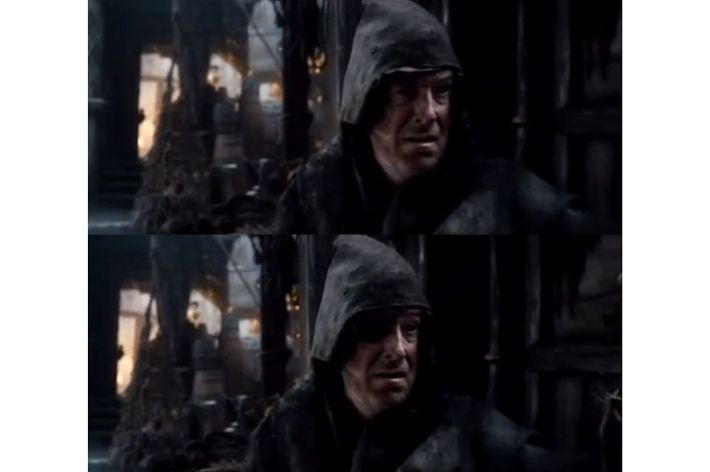 respect the classics 24 mins ago
The Biggest Surprises and Snubs of the 2021 Rock and Roll Hall of Fame Inductees LL Cool J and Kraftwerk can get a special award, as a treat.
By Devon Ivie
respect the classics 8:05 a.m.
The Go-Go’s, Tina Turner, and Jay-Z Among 2021 Rock Hall of Fame Inductees With Foo Fighters, Todd Rundgren, and Carole King rounding out the others.
friday night movie club 8:00 a.m.
Pride & Prejudice Is a Subtly Horny Balm for Our Time This week’s Friday Night Movie Club pick celebrates the small things when it comes to courtship, such as holding hands and brushing past one another.
in conversation 8:00 a.m.
Alison Bechdel Works Out Her Issues In her latest book, the graphic memoirist examines her relationship to exercise and, in turn, herself.
By E. Alex Jung
overnights 2:00 a.m.
The Handmaid’s Tale Recap: Boulevard of Broken Dreams Of all the streets in all the towns in all the world…
bachelor nation 1:34 a.m.
The Bachelorette’s Kaitlyn Bristowe and Jason Tartick Are Engaged The pair have been together for two years.
overnights Yesterday at 10:01 p.m.
This Is Us Recap: Dreams Deferred In times of crisis, Beth and Kate both get a little support from their biggest fans.
overnights Yesterday at 10:00 p.m.
The Real Housewives of New York City Recap: A Burning Sensation This is what happens when Ramona gets to spend the season’s entire event budget in her own backyard.
i say that's my baby Yesterday at 9:26 p.m.
Olivia Rodrigo Finally Met Taylor Swift at the Brits A historic moment for Swifties everywhere.
stand-up Yesterday at 8:54 p.m.
Who Should John Mulaney Be Now? The comedian’s first post-rehab show serves as a reminder that he, like all of us, is coming out of the pandemic differently than he went in.
By Jesse David Fox
brits 2021 Yesterday at 8:34 p.m.
The Highs, Lows, and Whoas of the 2021 Brit Awards High: Olly Alexander and Elton John. Low: P!nk … on video.
By Justin Curto
brits 2021 Yesterday at 5:49 p.m.
Olly Alexander and Elton John Sexed Up ‘It’s a Sin’ at the Brit Awards Proceeds from their duet go toward the Elton John AIDS Foundation.
brits 2021 Yesterday at 5:37 p.m.
Taylor Swift Becomes the First Woman to Win Brits’ Global Icon Award And the youngest and the first non-Brit.
brit awards 2021 Yesterday at 4:48 p.m.
Little Mix Is the First Girl Group to Win the Brit Award for British Group “This award isn’t just for us. It’s for the Spice Girls, Sugababes, All Saints, Girls Aloud.”
casting call Yesterday at 4:44 p.m.
Ed Norton Joins the Killer Cast of Knives Out 2  The list of potential suspects is growing.
90s kids Yesterday at 2:04 p.m.
Retreat Into Nostalgia with the Legends of the Hidden Temple Reboot, You Baby And adults are allowed to play.
alexa play chasing cars Yesterday at 1:57 p.m.
Sandra Oh on Whether She’d Return to Grey’s Anatomy: ‘No’ “While I understand and I love it, I have moved on.”
the law Yesterday at 1:35 p.m.
The Biggest Revelations From the Pop Smoke Murder Case Hearings His alleged killer was only 15.
true believers only Yesterday at 1:08 p.m.
Huge Nerd Demi Lovato Will Investigate UFOs in a New Peacock Series [Meme voice.] Aliens.
superlatives Yesterday at 12:48 p.m.
The Most Virtuosic of St. Vincent, According to Annie Clark “With my guitar, I did what I always do, which is just kind of humbly make shit that I think is cool.”
By Brady Gerber
More Stories