Was it the Dowager Countess in the library with the rat poison? Or was it Tom Branson in the Great Hall with the bar of soap? Murder is everywhere at Downton Abbey — or at least in the rooms designated on our homemade Downton Abbey Clue board. We’ve included cards for characters and “weapons,” too! Special add-on rule: If the murder is committed in Lady Mary’s bedroom, then everyone dies (because the ghost of Pamuk rose and killed everyone). Be careful! 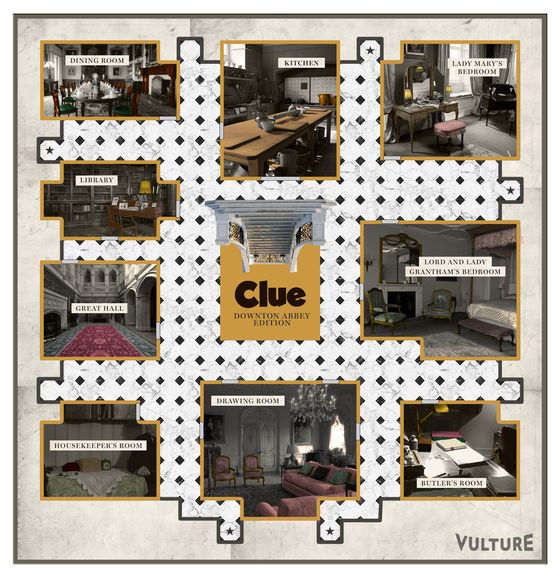 castings 2 mins ago
Brandy and Her Vocal Cords to Star in Hip-Hop Drama Queens Ready for the runs to heal us.
trailer mix 14 mins ago
Everyone’s Crying and No One’s Masked in the KUWTK Final-Season Trailer E! released a new teaser ten days ahead of the premiere.
the gold rush 16 mins ago
PGA Noms Improve Oscar Chances for Sound of Metal, Judas and the Black Messiah With snubs for Da 5 Bloods and News of the World.
the inside track 29 mins ago
On ‘Pay Your Way in Pain,’ St. Vincent Is Fully a Rock Star Annie Clark refracts ’70s funk through her own idiosyncratic view on the first Daddy’s Home offering.
bachelor nation 2:37 p.m.
A Bachelor Fan Account Crunched the Numbers on Matt James’s Controversial Season Suzana of @bachelordata explains how tracking stats like screen time and followers has exposed flaws in the show’s most diverse season yet.
keeping up with the ex-royals 1:00 p.m.
Serena Williams, Gabrielle Union, and More React to Meghan and Harry’s Interview “She teaches me every day what it means to be truly noble.”
deep dives 12:59 p.m.
A Guide to Every Easter Egg in Coming 2 America “This is true about sequels. If something is good, why ruin it?”
tv ratings 12:49 p.m.
17 Million People Watched Meghan Markle Topple the Monarchy An eye-popping average audience.
representation 12:44 p.m.
Steven Yeun Begged The Walking Dead to Let Glenn Kill Somebody “I campaigned hard.”
musicals 12:33 p.m.
A Queen’s Gambit Musical Will Revive Chess Onstage Without Reviving Chess But why not just revive Chess?
overnights 12:22 p.m.
90 Day Fiancé Recap: Jovi Ruins Our Chance at Joy We could have had a wedding so full of love it would probably create 20 whole minutes’ worth of serotonin in our brains. But will we get that? No.
close reads 12:17 p.m.
Allen v. Farrow’s Dylan Farrow Videos Are a Necessary Shift in Focus While it’s unsettling to watch a 7-year-old Dylan describe her abuse, it feels right that as an adult she’s finding healing in an on-camera context.
great rooms 11:20 a.m.
How Did They Make Alia Shawkat’s Disturbing All-Felt Apartment on Search Party? Alia Shawkat’s character was kept captive here.
last night on late night 11:06 a.m.
John Oliver Wants Elmo’s Mom to Drop the Hair-Care Routine “She’s taking care of herself, and protecting those edges.”
keeping up with the ex-royals 10:50 a.m.
Oprah Says Queen and Prince Philip Weren’t the Royals Concerned About Skin Tone “It was not his grandmother nor his grandfather that were a part of those conversations,” Oprah clarified this morning.
critics choice awards 2021 10:02 a.m.
Jason Sudeikis Wants to Thank Olivia Wilde for His Critics’ Choice Award Clad in a fresh sweatshirt.
annulé 12:57 a.m.
Pepé Le Pew Reportedly Benched From Space Jam: A New Legacy Oh yeah, this tracks.
keeping up with the ex-royals 12:21 a.m.
Prince Harry and Meghan Markle Reveal They’re Expecting a Girl The pair discussed their second child, due this summer, during their Sunday sit-down with Oprah.
keeping up with the ex-royals Yesterday at 11:19 p.m.
7 Meghan Markle Interview Bombshells That’ll Make You Anti-Royalist Markle was denied mental health help from Buckingham Palace when she became suicidal.
backstories Yesterday at 10:06 p.m.
How Allen v Farrow Obtained Never-Before-Seen Home Videotapes and Lost Documents “There was a cover-up of mass proportion.”
By Nick Allen
More Stories