Since Stieg Larsson’s The Girl With the Dragon Tattoo, The Girl Who Played With Fire, and The Girl Who Kicked the Hornet’s Nest became a publishing phenomenon in 2009, a few other books have borrowed their titles. 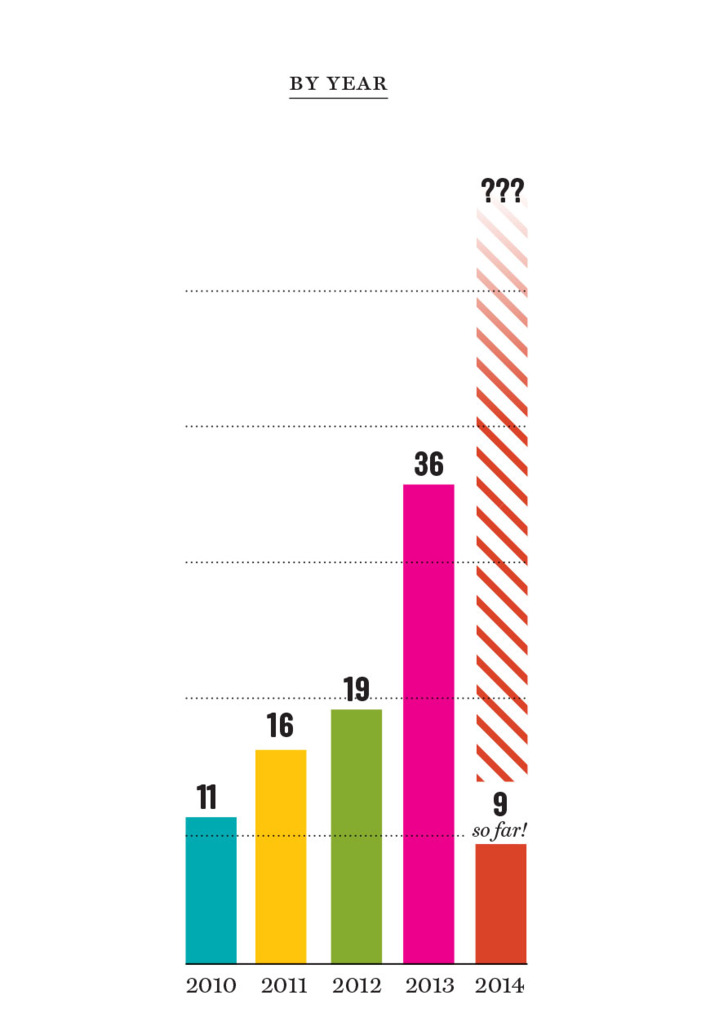 *This article originally appeared in the February 3, 2014 issue of New York Magazine.

+Comments Leave a Comment
The Book Title With the 91 Imitators

trailer mix 2:39 p.m.
Lettuce Enjoy Our Thyme With Nicole Richie in Her Nikki Fre$h Trailer She’s a conscious trap queen.
coronavirus 1:35 p.m.
All the Live Events, Movie Releases, and Productions Affected by the Coronavirus A long list of broken dreams.
cheers! 12:44 p.m.
A Cocktail at 9:30 in the Morning? Sure, Why Not. Let Ina Garten guide you through these trying times.
stop and chat about this 12:20 p.m.
Larry David Doesn’t Think Woody Allen ‘Did Anything Wrong’ After Reading Memoir “It’s a fantastic book, so funny.”
now streaming 12:00 p.m.
The 100 Best Movies on Hulu Right Now Good Will Hunting, Super 8, Portrait of a Lady on Fire, and more.
last night on late night 11:13 a.m.
Bill Maher Returns to Real Time With a Real Fake Laugh Track It’s a choice.
chat room 11:00 a.m.
Barry Jenkins, Adele Romanski on Releasing an Abortion Drama During a Pandemic The two producers talk Eliza Hittman’s Never Rarely Sometimes Always, and women’s access to reproductive health services amid the coronavirus.
last night on late night 10:39 a.m.
Jimmy Fallon’s Daughters Might As Well Get Their Own Show At This Point What can we say? Their comedic timing is great.
profile 8:00 a.m.
Her Dark Materials With Never Rarely Sometimes Always, Eliza Hittman takes on the “bureaucratic odyssey” of getting an abortion in the U.S.
By Rachel Handler
coronavirus Yesterday at 11:58 p.m.
After Recovering From COVID-19, Pink Donates $1 Million to the Fight Against It “It is an absolute travesty and failure of our government to not make testing more widely accessible.”
overnights Yesterday at 9:30 p.m.
RuPaul’s Drag Race Recap: Gigi’s Drag Race In an episode full of RuPaul trying to produce queens into botching the Snatch Game, one in particular refuses to break pace.
late night Yesterday at 9:29 p.m.
Comedy Central Shuts Off the Lights Over at Lights Out With David Spade Comedy Central won’t be bringing back the late-night show.
tiger king Yesterday at 9:07 p.m.
Joe Exotic ‘Ashamed Of Myself’ (Over Treatment of Animals, Not The Other Stuff) “Go sit in a cage with your animals for a week,” the Tiger King subject advises in a prison interview with Netflix.
obits Yesterday at 7:52 p.m.
The Flash Actor Logan Williams Dies at 16 Williams portrayed a young Barry Allen on the CW superhero show.
obits Yesterday at 6:57 p.m.
Bill Withers Was the Definition of Timeless Withers, who died earlier this week at 81, had talent and an air of imperturbable gravity.
By Bill Wyman
tributes Yesterday at 6:30 p.m.
Watch Bill Withers Reluctantly Perform One Last Time at 2015 Rock Hall Induction The singer-songwriter joined John Legend and Stevie Wonder to sing “Lean on Me” and “Use Me.”
money moves Yesterday at 5:39 p.m.
Mulan, Black Widow, French Dispatch, and More Disney Films Get New Release Dates You’ll have to wait longer for the next wave of Marvel supers.
follow friday Yesterday at 5:34 p.m.
Meg Stalter’s Next Hit Song Will Be About a Personal Meat Loaf We chatted with the comedian on Instagram Live about how she’s handling social distancing.
quarantuning Yesterday at 5:30 p.m.
Watch These Livestreamed Concerts During Your Social Distancing DJ D-Nice, Miley Cyrus, Ben Gibbard and a lot of Diplo.
By Justin Curto
rip Yesterday at 5:24 p.m.
‘He Was the Music’ The creators, songwriters, and cast of Crazy Ex-Girlfriend remember Adam Schlesinger.
More Stories