We’re back after a much-needed breather. Some of the intensity from the 100th episode has died down, but given the Bad News Anvil that dropped just before the credits last night, we’re not out of the woods yet. This episode paid-off the season’s premise so well by pitting Alicia against Will in a battle of wits and low blows. So crank up the Katy Perry (anything to get “Thicky Trick” out of your head), here’s what we learned from last night’s episode of The Good Wife.

Petergate: The Set-Up
The episode picked up almost exactly where we left off before the break: practically mid-spit take. The lovely and pregnant Marilyn drops all sorts of infuriating hints about the father of her baby and her placid provocations would irritate me as well were it not so fun to watch Eli squirm. Later on in the episode, he enlists Kalinda’s help to track down Marilyn’s mysterious baby daddy. First of all, that was a neat bit of logistical gymnastics Eli pulled off trying to make Kalinda believe she would be helping Alicia and not Peter in this particular case. Secondly, I think we can all agree that you can’t make Kalinda believe anything she doesn’t want to and it was likely the $500/hr rate (damn) that got her on board.

What Do You Call a Parody of a Parody?
Nobody does “ripped from the headlines” quite like The Good Wife and this week’s case was a personal favorite. The episode called back to last January when Glee and Jonathan Coulton battled over a version of “Baby Got Back.” Even those unfamiliar with that particular skirmish would probably pick up on the fact that the fictional Drama Camp and its slippery creator were meant as a nod to both the Fox musical dramedy and Ryan Murphy. Though Coulton vs. Glee never went to court, the case was tried in the court of public opinion and Murphy et. al. were found wanting. One thing this episode didn’t touch on that was a real sticking point for Coulton was the Glee team claiming that Coulton should be grateful for the exposure their cover gave him. That’s right, their uncredited cover. But the detail that won Alicia her case in this episode was taken directly from real life. In Coulton’s case, it was a stray duck quack on the bass track; in this case, it was the sound of a bowling ball striking a pin. Quack or strike, the evidence is just as damning. 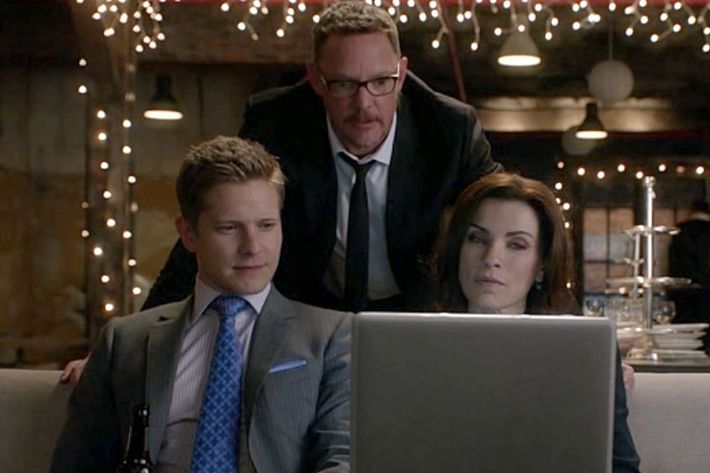 How Do You Not Like Katy Perry?
I’m not sure how we’re meant to feel about Kalinda’s new love interest. Jordana Spiro’s aggressive detective is certainly preferable to a Kalinda/Damian Boyle pairing but are we supposed to find her forcefulness charming? I did, however, enjoy the bedroom scene between the two of them, for obvious, groundbreaking, and easy-on-the-eyes reasons. I also enjoy the idea that Kalinda doesn’t know who Katy Perry is. It makes you wonder what Kalinda does during her downtime. Polish her boots? Curate her extensive eyeliner collection? Clean and obsessively dismantle and reassemble her guns? It’s probably that last one. Katy Perry quirks aside, it feels very much like they don’t know what to do with the lovely Archie Panjabi this season and even a plot that involves her in full investigation mode feels out of joint with the rest of the show.

You Changed
I was just remarking on how much I adored Alicia’s loud, plaid suit when she decided to go home and slip into something a little more controversial. Alicia usually favors conservative solids or demure tweeds so the plaid was eye-catching for those of us at home. Of course, the cream suit she chose to replace it proved much more distracting for Will. What’s interesting, however, is that I think that suit was not just the one she wore in the famous elevator scene, but also what Will had her wearing while he crushed her in his imagination during “The Decision Tree.” Those of you who have a better eye for lapels are free to contradict me, but I think it’s a call-back to a call-back. 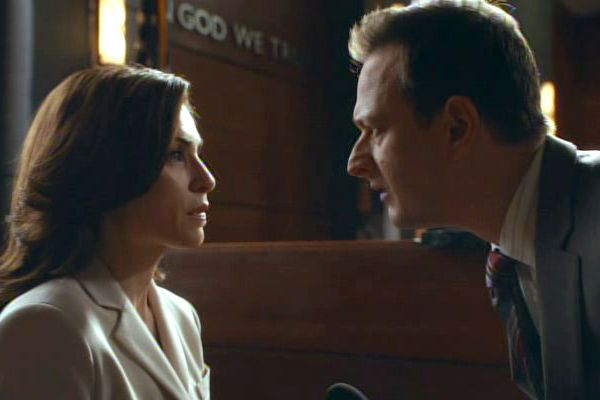 At any rate, the “you changed” comment Will throws at Alicia is definitely groaning under a double meaning. Both of them are letting their claws show this week and as both Alicia and Diane (and even F. Murray Abraham!) point out, Will is blinded by his personal vendetta/hurt feelings surrounding Alicia. We knew those motivations were simmering but now they’re starting to get the best of him. Alicia, on the other hand (with an assist from Cary) was able to keep her cool.

Legal Jazz
My favorite meta-moment of the episode, however, came when Matthew Lillard’s character geeked out over the courtroom drama. Here he is, expressing his (for lack of a better word) glee. 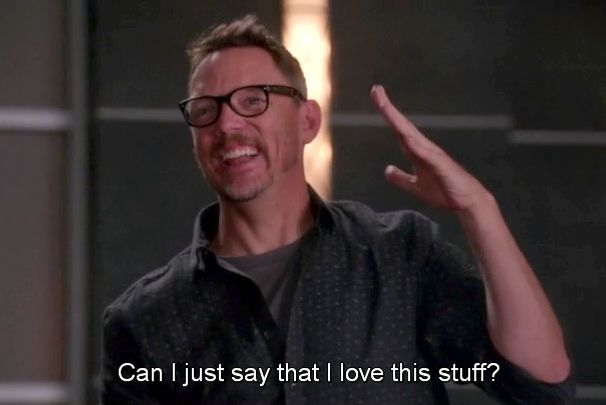 He went on to call the argument “legal jazz” and, like many of us, expressed a pleasure in the proceedings that had nothing at all to do with being able to follow every nuance of the case.  There has been some concern here in the past that these recaps don’t take a sharp enough look at the legal vagaries of the cases. This is a legal show, after all! While I certainly follow the case and appreciate the maneuvers of Florrick/Agos and Lockhart/Gardner, my enjoyment isn’t entirely dependent on a precise understanding of Compulsory Licensing vs. Derivative Rights vs. What, Exactly, Constitutes Satire. The show makes the legal intricacies plain enough for those of us without a law degree to follow. And when we get lost, there’s always the ongoing feud between expert musicologist witnesses to keep us entertained.

Cooking the Vote
Will’s antics inside the courtroom were troubling enough, but it was his behavior outside the courtroom that was more alarming. His allegiance with Damian Boyle is a troubling one and the closer he gets to Boyle and the further he gets from Diane, the more he’s in danger of losing our sympathies. His desire to expand is not the problem, but the thuggish way he and Boyle are manipulating the office is. In a phrase that echoes with what’s happening in the Governor’s office, Diane accuses him of “cooking the vote.” Given that it was Will who confronted Peter with that damning evidence at the end of last season, it’s upsetting to see how far he’s fallen since.

Petergate: The Payoff
There were two payoffs to Petergate in this episode. The first was fantastic and threatens to crack the season wide open. The second was a massive disappointment. When Eli went to the Tribune office to view a damning video we, of course, expected some hotel surveillance footage. Instead we see that video from last season’s finale of the Florrick campaign “cooking the vote.” As far as we know, Eli knew nothing about this. It’s even possible Peter is innocent. But his campaign isn’t and his victory is suspect. Will knows the truth and if this case goes to court I have to wonder if it will be the ultimate fight between Gardner and Florrick. The other payoff, the Bogdanovich cameo? That felt hacky and tone deaf. Like Brett Favre showing up at the end of There’s Something About Mary. The joke didn’t land at all. 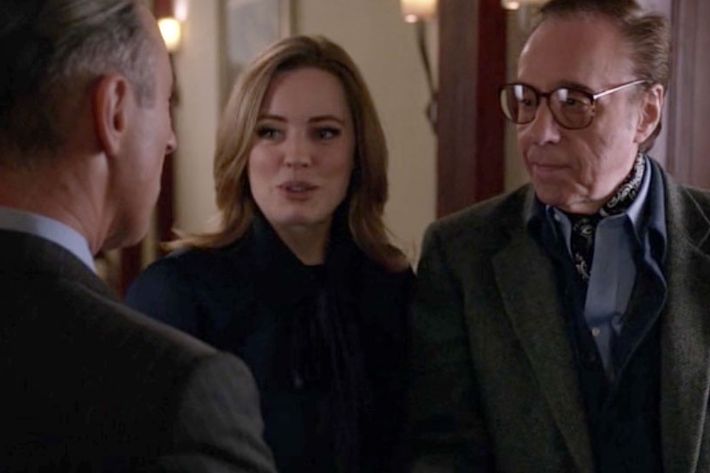 This Is Not What I Meant by Musical Episode
With the wealth of musical talent crowding the cast of The Good Wife, I’ve been practically begging from a musical episode all year. This is not at all what I meant. (F. Murray Abraham’s “I’m getting so sick of this song” line was perfection.) But I suppose we have to take what we can get and as long as Christine Baranski is dancing, we have little reason to complain. Here’s the cast shaking their well-tailored tail feathers to “Thicky Trick.” Enjoy.

cancel culture 28 mins ago
If You’re Reading This, Your Favorite Show Is Canceled All the TV shows we’ve lost in 2023, including Reboot and Gossip Girl.
last night on late night 10:15 a.m.
Harrison Ford Reviews Jason Segel’s Penis He’s familiar with his Shrinking co-star’s body … of work.
overnights 10:00 a.m.
Poker Face Recap: You Can’t Kill the Revolution Irene and Joyce’s murder is pretty badass to watch — like if The Golden Girls joined Fight Club.
role call 10:00 a.m.
Debbie Harry Answers Every Question We Have About Videodrome The Blondie legend on the “sticky” consequences of dyeing her hair, how James Woods annoyed David Cronenberg, and her work on Tron — whatever that is.
trailer mix 9:44 a.m.
Perfect Match Is Squid Game for Dating Netflix’s most famous singles will take matters into their own hands February 14.
explainers 8:00 a.m.
What the Great Netflix Password Crackdown Means for You Let’s talk about it.
making it 8:00 a.m.
Jen Beagin’s Novel About Sex Therapy Sparked a Hollywood Bidding War She was a waitress at 47. Now, her book Big Swiss is being adapted by Jodie Comer for HBO.
encounter 8:00 a.m.
Myles von Trapp Derbyshire Has a Story to Sell The Sound of Music scion says there will be no singing nuns in Baroness.
By Nate Jones
what's rita ora up to? 1:15 a.m.
Rita Ora Did a Wedding-Ring Reveal on The Tonight Show Tens of people wanted to look at Rita’s rock.
heartbroken Yesterday at 9:42 p.m.
6 Shows That Aren’t Getting Valentines This Year Reboot, Kindred, American Gigolo, and more have been canceled.
blind items Yesterday at 9:32 p.m.
Which ‘Massive Movie Star’ Did Jessica Simpson Secretly Date? Mister Police, she gave you all the clues.
text me back! Yesterday at 8:36 p.m.
Winona Ryder Leaves Finn Wolfhard on Read All the Time “She’ll text you, and then you’ll text her back, and then she won’t text you ever again.”
hard pass Yesterday at 7:40 p.m.
Seth Rogen Wouldn’t Do a Freaks and Geeks Reboot Okay, but what about Undeclared?
prison Yesterday at 7:13 p.m.
Jafar Panahi Goes on Hunger Strike to Protest Detention at Evin Prison Panahi should have been released to await a retrial on charges stemming from 2009’s Green Revolution.
guess who's back Yesterday at 6:41 p.m.
Mary Cosby Reportedly Returning to RHOSLC in ‘Friend’ Role Cosby will be the friend of Meredith Marks, friend to all (except Lisa Barlow).
ticketmonster Yesterday at 6:19 p.m.
Biden Wants His Beyoncé Tickets Like the Rest of Us He called for limits on junk fees for concerts and sporting events.
grammys 2023 Yesterday at 5:11 p.m.
Benito, Blige, and Brandi Among Grammys Performers Kacey Musgraves, Sheryl Crow, Mick Fleetwood, and Quavo will perform during the “In Memoriam” segment.
hard launch Yesterday at 3:36 p.m.
Paramount+ and Showtime Hard-Launch Their Merger Paramount + Showtime – multiple shows = new service.
respect the classics Yesterday at 2:12 p.m.
Ozzy Osbourne Retires From Touring Over Spine Injury “Never would I have imagined that my touring days would have ended this way.”
relaxing things Yesterday at 1:41 p.m.
Drift Off With Joe Pera’s New Podcast The comedian is back on his bullshit. The bullshit, in this case? Helping you fall asleep.
More Stories