What the People wanted, apparently, was a live awards show in which all the winners were already aware they had won. At the 2014 People’s Choice Awards, any surprises came in the form of “Oh God, who left the announcer’s mike on backstage?” not, “Oh God, I can’t believe I won.” The awards show where the winners are chosen by online vote unsurprisingly had a winner’s circle filled with the music, movies, and TV shows that most of America generally enjoys: Justin Timberlake, Iron Man 3, Despicable Me 2, Adam Sandler, The Voice, Supernatural, etc. The show’s hosts, the stars of 2 Broke Girls, schtick’d their way through a two-hour ceremony — and  their charming dumb-blonde-and-snarky-brunette routine actually worked well for them. (Well, mostly worked well for Kat Dennings.) Here were the show’s most noteworthy moments.

Favorite Male Artist, Favorite Album, and Favorite R&B Artist all went to Justin Timberlake, who had a cutesy staged moment with Favorite Daytime TV Host Ellen Degeneres on his way up to the stage. He then thanked his wife Jessica Biel for teaching him to put dishes in the dishwasher. That is bull, because there is no way Jessica Biel knows how to use a dishwasher.

Sandra Bullock and Melissa McCarthy also had a cute hand-holding moment on their way up to accept Favorite Movie Duo, for The Heat. 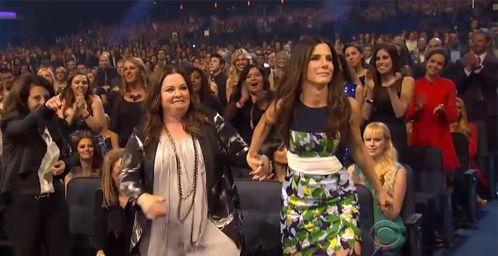 Adam Sandler took home Favorite Comedic Movie Actor for the fourth year in a row, and his recurring leading lady, a clearly pregnant Drew Barrymore, bowed down to him. Twice! It was weird. 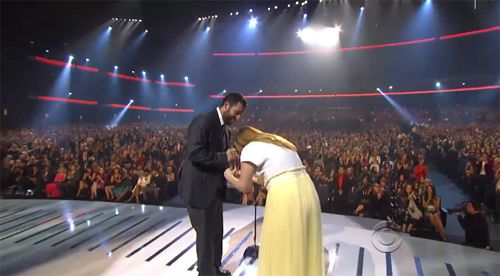 Somehow, Robert Downey Jr. got not only more time, but a spotlight and special voice effect when he accepted his award for Favorite Action Movie Star.

During Brad Paisley’s performance, he took an audience member’s iPhone and filmed her with it. 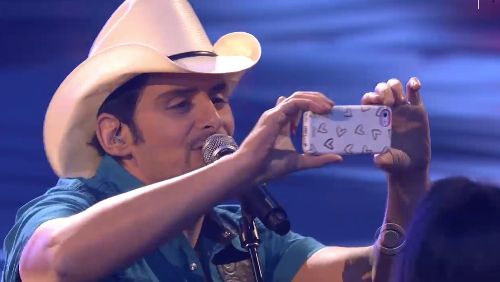 “Thanks for always drawing abs on me when you draw me naked,” said Chris Colfer, accepting the award for Favorite TV Comedic Actor.

Jennifer Hudson and her sister Julia accepted the award for Favorite Humanitarian because of their work with the Julian D. King Gift Foundation.

Ian Somerhalder and Nina Dobrev, who dated in real life and then broke up but still play lovers on The Vampire Diaries, won Favorite On-Screen Chemistry, which was probably pretty awkward for them.

“Let’s put Girls’ Allison Williams and The Walking Dead’s Norman Reedus together as presenters because at this point, WHO CARES?” 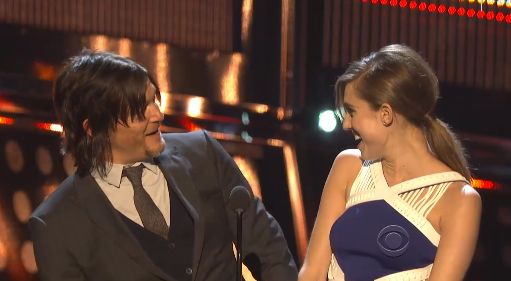 We the People present this award for Favorite Network TV Comedy to The Big Bang Theory.

But really, all that mattered is what Britney Spears (who shockingly won her first PCA last night) thought: 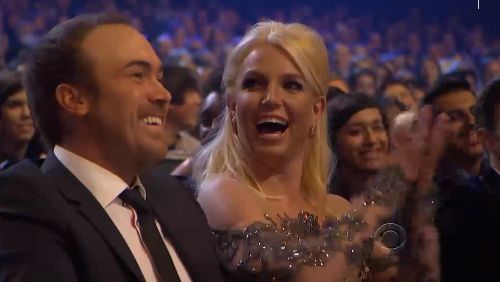 annulé 12:57 a.m.
Pepe Le Pew Reportedly Benched From Space Jam: A New Legacy Oh yeah, this tracks.
keeping up with the ex-royals 12:21 a.m.
Prince Harry and Meghan Markle Reveal They’re Expecting a Girl The pair discussed their second child, due this summer, during their Sunday sit-down with Oprah.
keeping up with the ex-royals Yesterday at 11:19 p.m.
7 Meghan Markle Interview Bombshells That’ll Make You Anti-Royalist Markle was denied mental health help from Buckingham Palace when she became suicidal.
backstories Yesterday at 10:06 p.m.
How Allen v Farrow Obtained Never-Before-Seen Home Videotapes and Lost Documents “There was a cover-up of mass proportion.”
By Nick Allen
overnights Yesterday at 10:03 p.m.
The Walking Dead Recap: Dog Days In flashback, our favorite bow-hunting brooder grapples with his complex relationship with Carol in parallel with a mystery woman he met in the woods.
the gold rush Yesterday at 9:28 p.m.
Baby Angel Alan Kim Bursts Into Tears Accepting Critics Choice Award “Is this a dream?,” asks the Minari star.
overnights Yesterday at 9:00 p.m.
The Real Housewives of Atlanta Recap: A Page Six Shin Ding Kenya opens up in therapy as the rest of the women try to figure out who leaked Cynthia’s bachelorette party to Page Six.
the gold rush Yesterday at 8:34 p.m.
Winners Maria Bakalova, Daniel Kaluuya Kick Off Critics Choice Awards The show later heaped praise on The Crown, Ted Lasso, and Nomadland.
covers Yesterday at 3:03 p.m.
Replace Carpool Karaoke With Spooky Graveyard Karaoke Caroline Polachek really made a case for this new format on The Late Late Show With James Corden last week.
grammys 2021 Yesterday at 1:32 p.m.
Taylor Swift, BTS, Megan Thee Stallion, and More to Perform at the 2021 Grammys “Artists will be coming together, while still safely apart, to play music for each other as a community and celebrate the music that unites us all.”
extremely online Yesterday at 1:02 p.m.
Zoe Sugg and Alfie Deyes Are Expecting a Baby YouTube Royal How soon is too soon for a Zoella Jr. line of baby makeup?
diversity Yesterday at 12:29 p.m.
The HFPA Promises to ‘Build a More Inclusive Community,’ Address Racism Time’s Up issued a response to the statement.
tributes Yesterday at 1:32 a.m.
Beyoncé Pays Tribute to Late Fan With ‘Love on Top’ Medley Lyric Chanel died from brain cancer on Friday.
bachelor nation Mar. 6, 2021
Rachel Lindsay Returns to Instagram Following Harassment She also accepted Chris Harrison’s apology.
tv recaps Mar. 6, 2021
Freaks and Geeks Walks Into Splintered Sunlight The series ends bittersweetly, with most of its characters stepping tentatively, then confidently, forward into who they want to be.
rupaul's drag race Mar. 6, 2021
Say G’Day to the Sheilas of RuPaul’s Drag Race Down Under The latest international expansion of the Drag Race empire will have ten new queens.
book review Mar. 6, 2021
In Klara and the Sun, Artificial Intelligence Meets Real Sacrifice Kazuo Ishiguro’s novel proposes a world where the machines never revolt.
By Helen Shaw
deep dives Mar. 6, 2021
How Coming to America Flipped the Script on Eddie Murphy’s Career The film would influence so much of what Murphy did in the years to follow — and continue to have a hold on contemporary audiences.
just married Mar. 5, 2021
The Fifth Time’s the Charm for New Groom Nicolas Cage The actor wed girlfriend Riko Shibata in Las Vegas last month.
gawrsh Mar. 5, 2021
Disneyland, California Theme Parks, Sports Stadiums May Reopen April 1 At a limited capacity with mandatory mask use, of course.
More Stories