It’s like Mom used to say: Sometimes it takes being double-teamed by two powerful men to really make things interesting. Ha-ha, just kidding. Mom never said that. But Supernatural basically did! This week, Sam had not one but TWO supernatural creatures in him and it turned an otherwise unremarkable episode into something truly special. In all, “Road Trip” boasted more than a few crowd-pleasing elements: the return of Abaddon; a full-strength Castiel; Dean memorializing Kevin’s death by throwing lamps; a Justin Bieber–esque pop star getting very murdered; Sam becoming a pass-around meat suit. But if we’re being real, this episode was THE CROWLEY SHOW, and when he claimed he was “the goodest guy” in the room he was RIGHT. 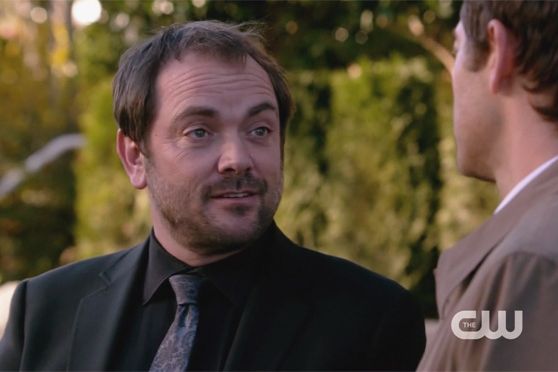 See, when a TV series has been on the air for 100,000 seasons, it’s only natural for our brains to look past the usual formula and grow attached to the smaller side elements. For me, at this moment in time, that would be Crowley. He’s always been one of the show’s best characters, but the first half of this season suggested Supernatural didn’t quite know what to do with him. Chaining him up in the back room meant he was always available for a quip or two, but it also made him seem weak and ineffectual, two things that Crowley should never be. But “Road Trip” finally loosed him into the world and gave him not only ALL the punch lines, but also the episode’s big hero moment. Did you legit cheer when he saved Sam? I did! (I live alone.) 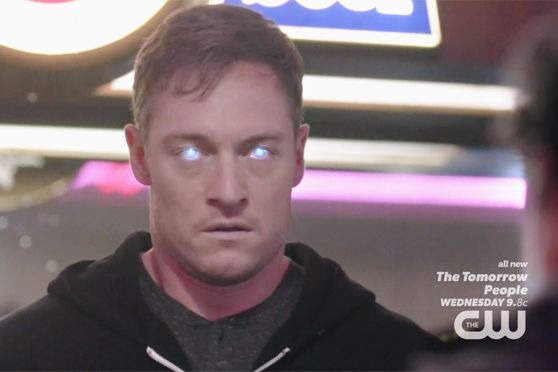 Anyway, despite Supernatural coming off of a hiatus that felt like a lifetime, story-wise it picked up immediately where the mid-season finale left off: Ezekiel, a.k.a. Gadreel, had absconded with Sam’s body following the shocking murder of Kevin. In a poetic, wordless cold open we found Dean crying before a funeral pyre and later angrily tearing up the Men of Letters bunker in a guilt-fueled rage. Just a lot of emotions, everybody. I mean, ouch: 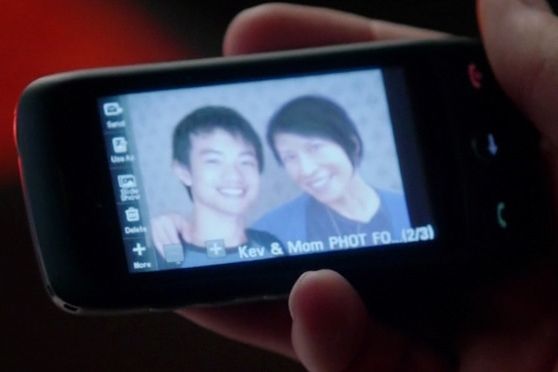 Only a monster would not feel things during this scene, and that monster deserves to hunted down and salted and burned. To be honest I was never wild about Kevin as a character, but I did love what he brought out in the Winchesters. They clearly looked to him as a little brother (well, a little brother who wasn’t a murderous ghoul and/or hell spirit like their actual brother). And call me a weirdo but I really liked the arc involving Kevin’s mom. THAT is the woman I wish had been the prophet, but whatever, I shouldn’t backseat-write this show. What I’m saying is, Dean’s anguish over Kevin’s death retroactively made Kevin that much more compelling. Rest in peace, you useful geek! 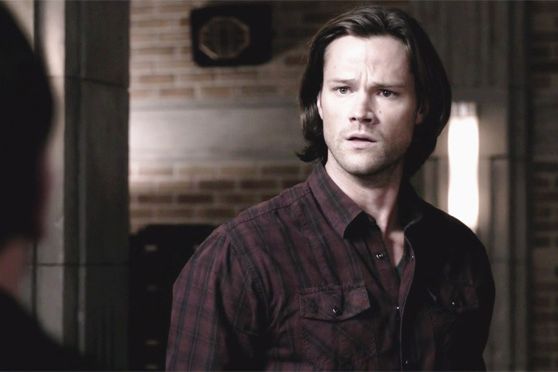 As for Sam, he spent most of the episode locked in a dream state while Gadreel hit the road wearing his hunk suit and carried out Metaton’s hit list (the first victim of which was an obvious Bieber parody that had been overtaken by an angel). Although I assumed that Gadreel’s treacherous reveal meant he’d go on to take a sudden swerve into outright villainy, it turned out Supernatural had something more nuanced in mind. Apparently Gadreel had been locked away in Heaven’s prison for eons, so his motivation moving forward was to somehow redeem himself by helping Metatron rule Heaven and allow his brethren back in. Or something? Anyway, this meant that in his mind he was actually doing good work, which served to make him both sympathetic and loathsome, a neat trick if the writers can pull it off. It certainly helps that he also resembles Tahmoh Penikett (who returned in this episode as a hapless bartender look-alike destined to be possessed by Gadreel). 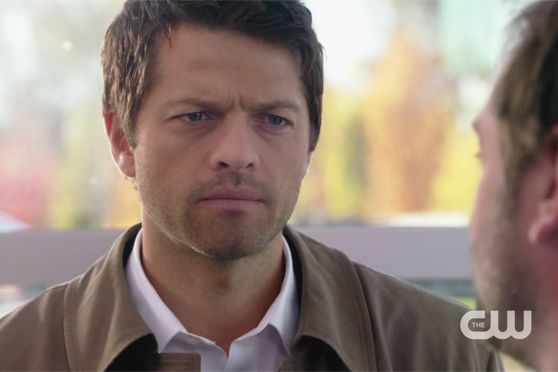 After a bit of business involving Crowley meeting up with a communications demon (with ties to the NSA — topical!), Dean and Crowley quickly tracked down Gadreel/Sam by locating Dean’s stolen “phallus on wheels,” and Castiel knocked him out cold with a single punch. Make no mistake, it had certainly been endearing to witness Castiel’s awkward fumblings as a regular human, but it’s sincerely so great to have him back as a full-strength angel. It’s like, great, he got laid, but let’s get back to the mind-reading and hand-zapping! 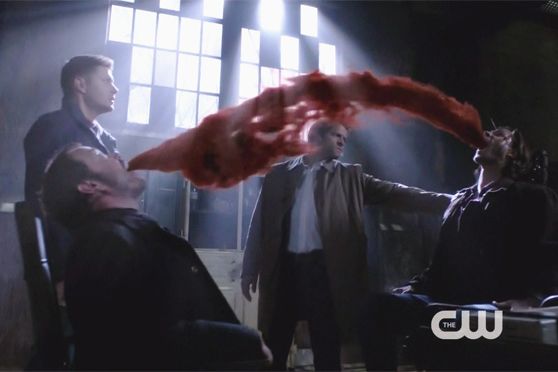 The obvious centerpiece of this episode — and the element that turned the first half’s admittedly blah proceedings into something verging on classic — was Crowley’s offer to possess Sam’s body (with Gadreel still in there!) in order to get him to “wake up” and forcibly eject the intrusive angel. Just personally, for me, nothing quite thrills me like a villain turning suddenly helpful and this episode was essentially a love letter to Crowley’s verisimilitude. Before we knew it, Crowley was vomiting a red cloud into Sam’s mouth and physically tussling with Gadreel inside his body. Ignoring the obviously sexy metaphor going there, it was just a twist-free moment of heroism from Crowley that made me smile very hard. 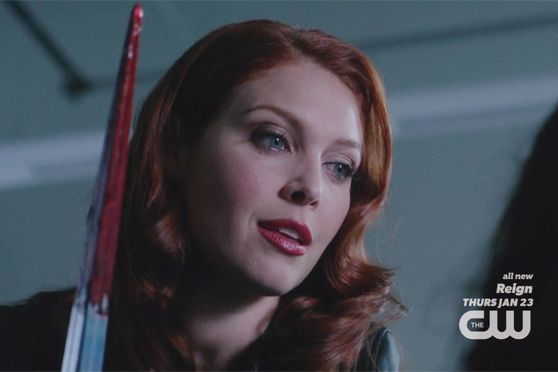 After the business with Gadreel was over (for now), a smaller thread between Crowley and Abaddon promised to become something larger in the future. It seemed Hell had been stuck in a state of limbo as all the demons wait to see whether Abaddon or Crowley will be their next leader. Which means, you guessed it: A political campaign for the top spot seems imminent! In a quick but amusing scene toward the end, Crowley actively promised Abaddon’s henchmen that he’d be a better leader than she would and actually seemed to sway them right then and there. Man, those two characters squaring off in a sort of dark-mirror of our own political system? Sign me up. 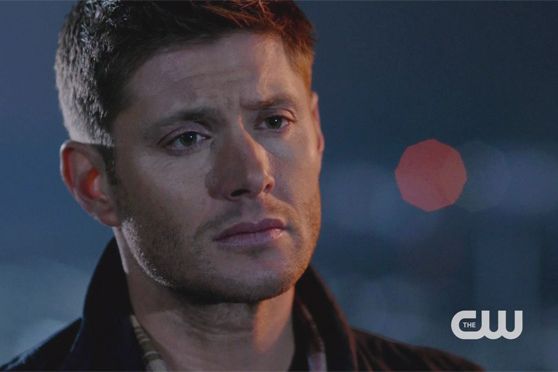 If there’s one complaint to be had about “Road Trip” it’s that it continued to traffic in one of Supernatural’s most tired cliches: The Winchesters “splitting up” for insufferable reasons. In this case, Dean still felt guilty for having misled Sam (despite saving his life) and also getting Kevin killed, and insisted on going off on his own. But after eight-and-a-half seasons, haven’t the boys learned by now that 100 percent of the times they’ve split up they came to regret it? I understand Supernatural has a formula to adhere to, but it’s downright disrespectful to longtime viewers to keep repeating this plotline over and over. The Winchesters are NOT going to split up. The Winchesters are also NOT going to willingly allow the other to die. We know these things with certainty at this point. Please, please figure out a better source of Winchester feels, show. I just don’t think these tropes will ever work on me again.

But back to the main point: Terrific episode. More, please!