In this series, Vulture has been speaking to the screenwriters behind 2013’s most acclaimed movies about the scenes they found most difficult to crack. What pivotal sequences underwent the biggest transformations on their way from script to screen? Today, writer Bob Nelson discusses paring down a key scene in Alexander Payne’s Nebraska where Ross (Will Forte) and his taciturn father Woody (Bruce Dern) visit the place where Woody grew up, accompanied by Woody’s wife Kate and other son David. The scene is then excerpted below.

Since it was my first screenplay, most of the scenes were tough to write, but if I had to pick one, it would be the walk through the old homestead, because there’s a balancing act between how much is said and unsaid. I rewrote the script a few times and I rewrote that little sequence way more than you might think, just trying to get it right. It’s funny that the scene that has the least dialogue was probably the hardest! I ended up favoring the side of less dialogue and just leaving it to the actors, and I’m really glad I did: Bruce Dern’s face tells more story than I ever could have.

A lot of movies will just reveal everything to you and tell you exactly why everyone behaves as they do, and then there are some movies that try to hide everything and make you guess at it. I kind of favor something in between, a little bit of a reveal that comes slowly as the movie goes along. That’s probably why I ended up writing this scene so many times, because I was trying to get you started wondering, “Who is this guy, and why is he behaving this way?” It’s sometimes hard for kids to realize that parents had lives before they were born, and there are little reveals here, like the fact that Woody was shot down in the war, which correlate to my own dad and the things I learned slowly about him while I was growing up. My father was shot down during World War II, and he never talked about it or told me. I learned about it many years later, and I was told that when he came back from the war, he was a little quieter, and that something had certainly changed in him.

Alexander did his own rewrite, and I think he cut it down even a little bit more than I did. In fact, the part where they discuss the death of Woody’s brother got trimmed back further: In my line, after David asks, “Do you remember that, Dad?” Woody says, “Sure, I was there.” When they shot it, the “sure” was gone, and that turned out to be a great move. I don’t know if it was Bruce Dern or Alexander Payne who dropped the “sure,” but when Woody said it, he was still being dismissive and curmudgeonly. By dropping that word, though, it becomes the first time he’s just spoken to his son naturally, an honest response without any attitude or rebuff. I think that was the right way to go: I had trimmed his response all the way down to four words, and the correct way to do it was three words! That was a lesson for me. 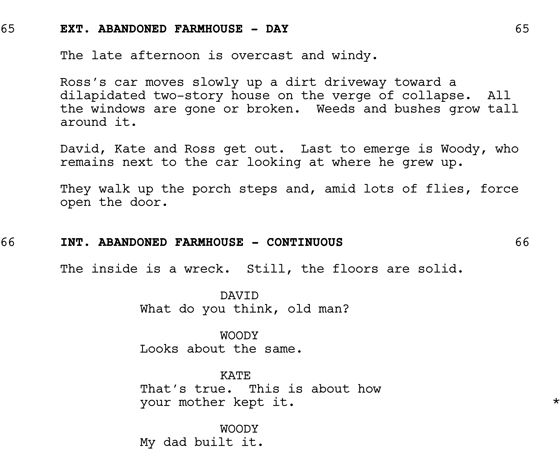 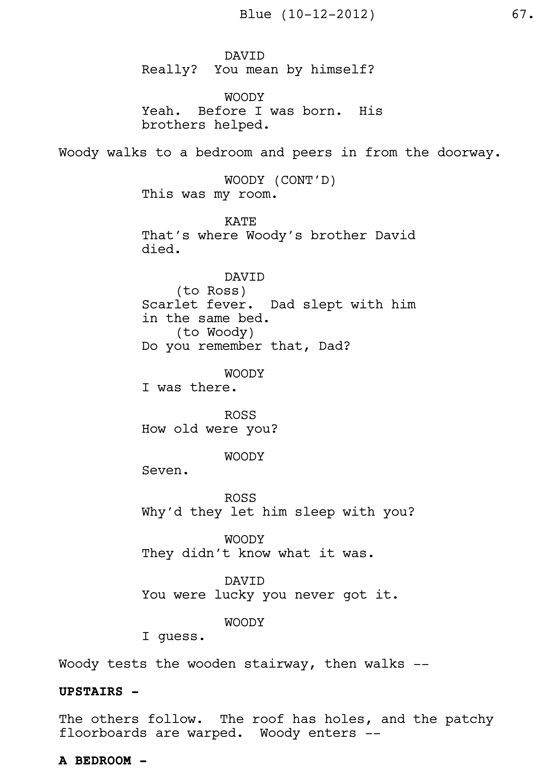 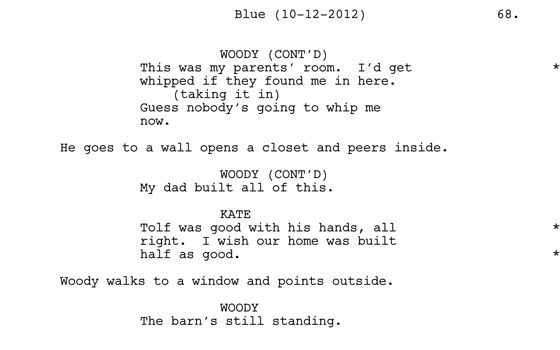