Let’s say you are having a baby, or maybe you’re helping a friend or family member with theirs. And let’s say your biggest hope for this child (beyond health, happiness, clean air to breathe, and peace in our time) is that he or she will be really famous. Like, obscenely famous. Gonna-buy-you-a-house famous. To make sure this happens, you need to be on your game from the beginning, which means picking the right name. This is important. You want to find one with a proven track record and the best chance of ending up in lights. Vulture is here to help. After an exhaustive study of the last twenty years in movie-star names, we have devised a foolproof guide to choosing the one that has the best odds for movie-star success. Hope you like the letter J!

First, a brief note on methodology: I collected all the first names of actors and actresses who (a) had one of the lead roles in at least one of the top 10 grossing films for each of the last twenty years, and/or (b) had an Oscar nomination for acting during that same period. These were sorted and tallied by first name (one point for each different “Chris”) to find the most common names. Note: Each actor was only counted once. For example, Tom Hanks has been nominated for multiple Oscars and starred in multiple box-office hits, but he only counts as one Tom.

The results: The most common movie star names of the past twenty years, for men and women respectively, were Christopher and Jennifer. (They just edged out John and Kate, by one point each.) This makes sense, in a way, since the popularity of these names peaked about 30 to 40 years ago, when most of today’s movies stars were being born. But it is also worth pointing out that Christopher and Jennifer are not as popular now, in 2014, as they were back in 1980. And there are other problems, specifically with the name Christopher, which has fallen on hard times in recent years. Think of all your current famous Chrises — Evans, Pine, and Hemsworth. They’ve done well at the box office, but only because of their franchise success through Marvel and Star Trek. They do not have an Oscar nomination among them, and the audience can barely tell them apart. The Christopher brand is tarnished. But more important, Christopher violates the most inviolable rule of movie star names: They should start with the letter J. 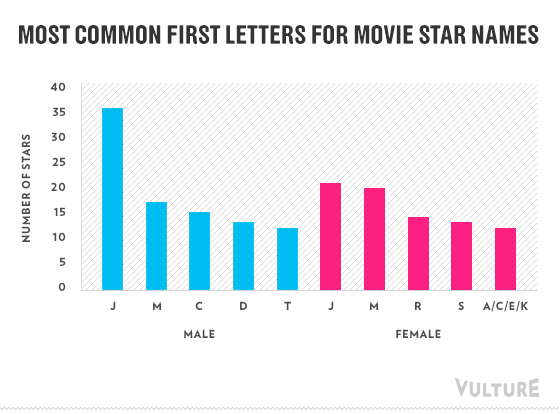 J is the most popular letter for both male and female names, by a mile. Jeff Bridges and James Franco, Julia Roberts and Judi Dench. Wouldn’t you like your child to follow in their footsteps? Of course you would, and a J name is the surest bet. But wait! We can get even more specific. It turns out that there is a syllabic element to success. 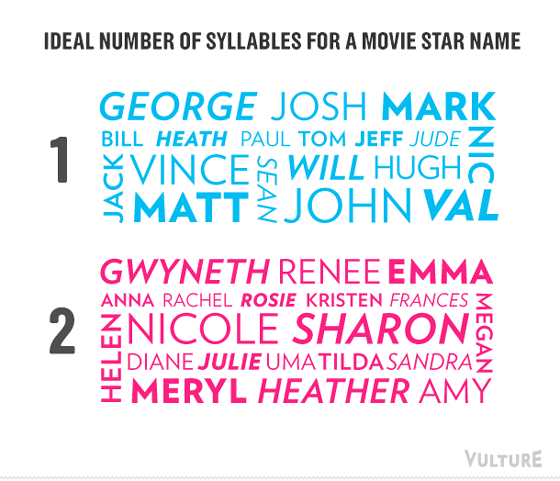 Going by frequency, one-syllable names are most commonly successful for male names; two syllables is preferable for a female name. So, combining that with our J rule: Jude, Josh, Joe, John, James, Jack, Jay, and Jules are all great for boys’ names. Or Judi, Julie, Jodie, Jacki, and Janet for women. Those would all work and will likely land you a plush seat next to your smiling child at the 2024 Oscars.

While that is the clearest statistical gateway to success, maybe you just don’t like names with J. Maybe you want your child to be a special movie star flower. For the stubborn dreamers, here are some additional rules:

1. Catherine with a C is preferable to Katherine with a K.
We’re assuming that you’d like your child to get some critical recognition, in which case, you’ll want to follow after Catherines Keener, Zeta-Jones, and Blanchett. Kate Winslet is the obvious exception to this rule, but do you really want to risk the career of a Hudson or a Beckinsale?

2. Robert is the most versatile man’s name.
Roberts — think Downey Jr. and De Niro, but also Pattinson, Duvall, and Benigni — have demonstrated success both at the box office and the awards circuit. Avoid Rob or Bob, since the famous Roberts tend to go by their full names. (Yes, Robert De Niro’s friends call him Bob, but are you Bob De Niro’s friend yet? No. That’s why we’re doing this.)

4. Z names do not win awards, but they make money.
You’re just here for the $$$? Then go with Zach (Galifianakis, Quinto) or Zooey (Deschanel, Saldana). A Z name has not been nominated for an acting Oscar in the past twenty years.

5. Helen is always a good bet.
Mirren, Hunt, Bonham Carter (with an extra A, yes, but it’s the same idea). Helen worked for the Trojans, and it still works now.

6. Don’t name your kid Xander.
There is not a single X name in the database, and it breaks every rule listed above. Don’t do it.

+Comments Leave a Comment
What to Name Your Baby: Movie Star Edition