I have one line on Girls this season, it came about solely through nepotism, and I could not be more proud.

I’m Lena Dunham’s godfather. Each season, since the show’s been on the air, she’s sent me an e-mail asking me to make an appearance. Secretly thrilled but not wanting to pressure, I responded, “If you build it, I will come.” She didn’t build it the first two seasons, and I didn’t brood. (Much.) This year, it happened. Although I’ve done my share of TV, and this was a single scene, and I’m not quite sure I heard what I said when I saw the final cut, I’m pretty sure that I killed.

We shot it on June 26 in a small office at 1619 Broadway — a.k.a. the Brill Building, where Carole King, Leiber and Stoller, Burt Bacharach, and countless other songwriters and performers made their music. As soon as I stepped off the tenth floor elevator I saw a maze of little Broadway Danny Rose offices and huge numbers of young people pushing cameras, adjusting lights, doing things with bundles of cable. Someone gave me three lines to learn. (Two of them ended up cut.) Mostly, I watched Lena talking into microphones, conversing with many people, from the director on down, all in other rooms. I was in love with them, the show, the energy, and her. When I left to go run a quick errand, I was so worked up that — and this has never happened to me before — I got turned around in Times Square and had to call for directions back to the set. Incredibly, they gave me a trailer; Lena stopped by to hang out, talk to me, and calm my nerves. It’s amazing to be calmed down by a grown woman who, when she was 8, I once saw cry because she’d killed an ant. (We organized a funeral.)

Then they said it was time for my scene. All three of my lines kept changing. Lena ran in and out of the room suggesting different things to say, including, once, “No, I’m not going to wear a beret.” 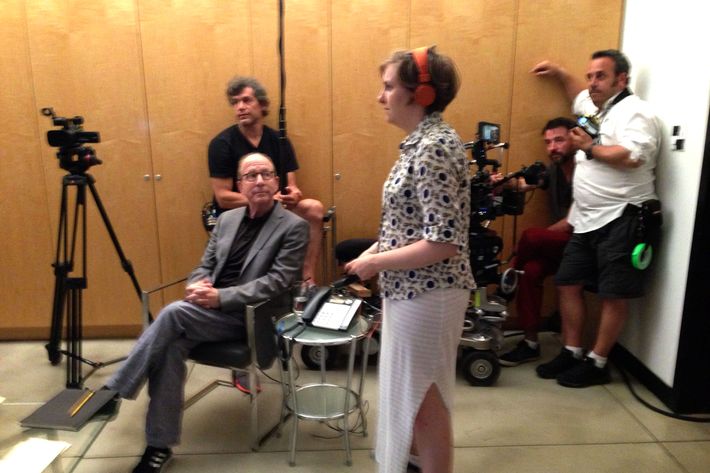 Although my dialogue is spoken into a cell phone, I was sitting opposite Adam Driver, and I got to watch him work. On each take, he added a new wrinkle, something sort of awesome. Once he got up and knocked down the chair; another time, he started making glottal sounds; a few times he lunged toward me to shake my hand. Between takes, Lena talked to the director or Driver. I’d seen her shoot once before, and all this confirmed what I saw then: That every tiny thing you’re seeing in her work is exactly what she wants you to see. In total control, she’s also channeling all of these other people’s energy. The actress in the scene with us told me, “I’ve never seen a set this fun, open, happy, and improvisational.” Our 30-second segment took three hours to film. I said my good-byes and walked out in a daze. It was one of the most carbonated days I’ve ever had. 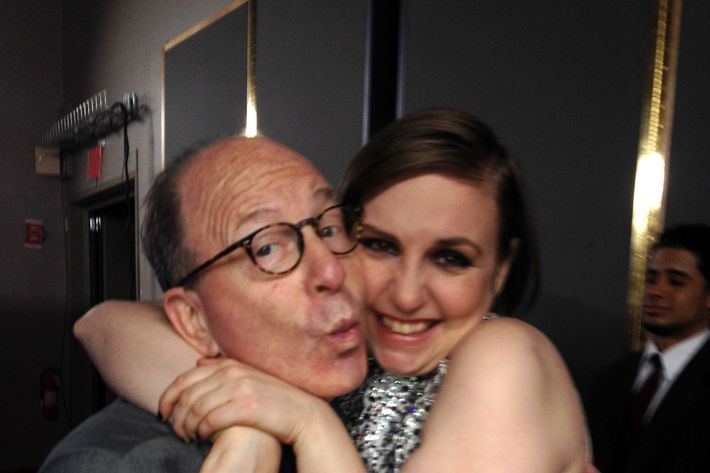 You’ll have to watch this Sunday night to find out what my line is. I’m not telling. One clue: Don’t look down at your Twitter feed during the first ten minutes of the show.