Unless you are president of the Rob Lowe fan club, your opinion of the 1986 movie About Last Night is probably either 1) Oh yeahhhh, that was a movie; or 2) Wait, that was a movie? The original, starring Rob Lowe and Demi Moore fresh off St. Elmo’s Fire, is not exactly part of the Brat Pack canon. It did just fine at the box office, earned decent reviews, and then went straight into the Trivia Night folders. So on the occasion of the remake — starring Kevin Hart, Regina Hall, Michael Ealy, and Joy Bryant, out this Friday — here are some things to remember (or learn) about the original About Last Night.

Rob Lowe is not very good at Mamet lines.
About Last Night is based on the 1974 David Mamet play Sexual Perversity in Chicago, which, as you might guess from the title, is about four young people in Chicago who say a lot of crude things about relationships. Mamet didn’t write the screenplay, but the film has his signature foul-mouthed dialogue and a fast rhythm that Rob Lowe is … not comfortable with. (It’s weird, because Lowe later proved to be very good at zippy Sorkin dialogue, but the Mamet does not work for him.) About Last Night follows the basic plot points of the play: two people start dating, move in together too soon, and fight a bunch. This would be a good time to mention that …

This is not a comedy.
Like, not at all. Jim Belushi, who plays Lowe’s best friend, yells “tits and ass” a lot while getting drunk, but that is as much comic relief as you will find in the 1986 version. It’s a movie about the complexities of a relationship, which means watching Rob Lowe and Demi Moore have a lot of sex and then argue about whether to buy a turkey or a ham for Thanksgiving. (For some reason, Demi Moore wants to buy a ham. She is almost always right in this movie, but not about the ham.) Then — spoiler alert — they break up on New Year’s, and Rob Lowe delivers the “get out” speech from some tacky red design chair. Demi Moore tries her best to cry. Pro tip: Don’t watch the original movie on Valentine’s Day.

They really do have a lot of sex, though.
And they’re very naked, for a large portion of the movie. There’s one particularly long sex montage with breasts and blooming flowers (literally, but also figuratively) and a bike wheel (Demi Moore: having sex near spinning objects since 1986). Also, this happens: 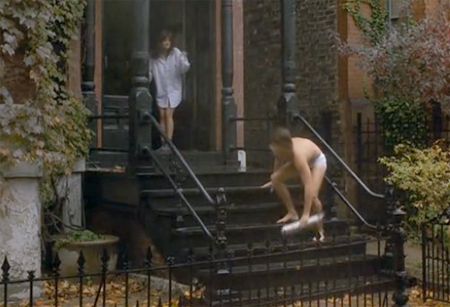 Then both Rob Lowe and Demi Moore prance into the kitchen butt-naked. Rob Lowe also does all household chores — setting the dinner table, sensually making pasta — with his shirt 100 percent unbuttoned. Related: I lost count of all the bare asses. 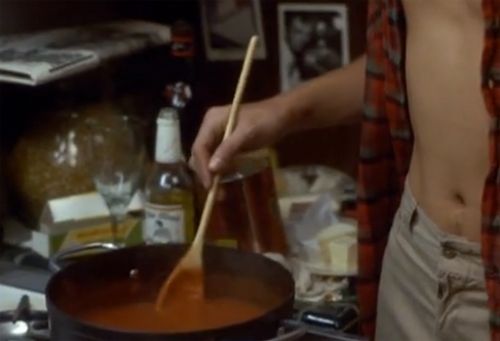 The Kevin Hart character is not the star.
He’s playing the Belushi role — the best friend who exists to tell Rob Lowe how terrible relationships are, and who eventually talks him into ditching Demi. There is also a female counterpart, played by a very young and very permed Elizabeth Perkins. They hate each other, and not in a meet-cute, end-up-married type of way. It is mostly a competition to see who can make various social settings (softball games, second dates, St. Patrick’s Day) the most uncomfortable. (One assumes that the Kevin Hart version will be funnier.)

(Yes, this is a different shirt.)

Her boots are great, too, and her overalls, and her front-clasp bra. There’s a very cool nightgown. Everything she wears in this movie is magic.

Spoiler (again): It’s a happy ending.
I mean, you’ve just watched two hours of bickering by actors who are really not believable as working-class Chicagoans, so really you are just happy for silence. But yes, they end up together. Love triumphs, even in a Mamet adaptation.

the long and winding show 3 mins ago
The Beatles: Get Back Is Too Long, But It Has to Be What may at first seem like a major bug in Peter Jackson’s new docuseries is actually its greatest feature — and a gift.
a long shot 14 mins ago
‘You Just Have to Accept That Wes Is Right’ The French Dispatch crew explains how it pulled off the movie’s quietly impossible long shot.
By Matt Zoller Seitz
only girl (in the republic) 12:30 p.m.
Barbados No Longer Has a Queen, But It Does Have a Rihanna That’s the Right Excellent Robyn Rihanna Fenty, National Hero of Barbados to you.
reality tv 12:17 p.m.
Netflix’s Selling Tampa Trailer: ‘Closing Deals in Heels’ Along the Suncoast “They got some problems. Watch.”
adele's palace 11:32 a.m.
Hold on, Adele Is Doing a Las Vegas Residency “Weekends With Adele” runs January through April at Caesars Palace.
essential episodes 11:07 a.m.
17 Essential Episodes of It’s Always Sunny in Philadelphia Featuring rum ham, Chardee MacDennis, and, of course, the Nightman.
awards season 10:58 a.m.
Squid Game Wins Its First Major Award at the Gothams And The Lost Daughter did anything but lose.
a long talk 10:21 a.m.
Squid Game Creator Hwang Dong-hyuk Answers All Our Lingering Questions On “Gganbu,” Ali, and how he lost six teeth during production.
rip 9:59 a.m.
Mandy Patinkin, Barbra Streisand, and More Pay Tribute to Stephen Sondheim “I got to be in the room with Shakespeare. Who gets that? How come I got to have that even for a minute? And it was a lot more than a minute.”
now streaming 9:00 a.m.
New on Netflix: December 2021 Don’t Look Up, Cobra Kai, The Lost Daughter, and more.
advent calendar 8:00 a.m.
Vulture’s 2021 Advent-Calendar Gift Guide Something for everyone on your list (or at least everyone who owns a TV).
advent calendar 8:00 a.m.
Millennial Women Rejoice: Grown-up American Girl Doll Merch Is Here Felicity Merriman: the original horse girl.
crime 1:06 a.m.
Marilyn Manson’s Home Was Searched Amid Investigation Over Abuse Allegations Law enforcement executed a warrant on the artist’s West Hollywood residence.
middle school's out forever Yesterday at 10:53 p.m.
Hulu’s PEN15 Will Finish After Its Second Season The second half of the final season drops December 3.
overnights Yesterday at 10:00 p.m.
Below Deck Recap: Wind Gusts, Thongs, and Drunken Snogging A perfect and hilarious episode of Below Deck. No notes!
astroworld tragedy Yesterday at 8:47 p.m.
Travis Scott’s Offer to Pay for Youngest Astroworld Victim’s Funeral Rejected The family of 9-year-old Ezra Blount declined via a letter from their lawyer.
the law Yesterday at 7:17 p.m.
Ari Lennox Says She Was Racially Profiled Before Arrest in Amsterdam According to her manager, she is now “safe and appreciates the support.”
tv review Yesterday at 7:16 p.m.
Peter Jackson’s The Beatles: Get Back Accomplishes the Unthinkable It rises to the unenviable task of offering new insights into one of the most documented music careers of all time.
rip Yesterday at 6:59 p.m.
Ye, Frank Ocean, Pharrell, and More Mourn the Death of Virgil Abloh “You were a kind, generous, thoughtful creative genius.”
can't keep a good guy down Yesterday at 6:45 p.m.
Chucky Will Come Back to Play for Season Two Coming sometime in 2022.
More Stories