And here I thought “Peruvian fat-sucker” was just a metaphor. Friends, it’s been a good while since Supernatural brought us a stand-alone monster episode that 1) had a scary monster and 2) didn’t feel like a wheel-spinner keeping us from the mythology. Despite its monster-of-the-week beginnings, post-season-three Supernatural has frequently treated stand-alone cases as either particularly inspired experiments (i.e., Ben Edlund episodes) or alternatively, boring afterthoughts that did little else than make sure the season’s mythology stretched to 22 episodes. Last week’s Werewolf Garth episode felt very much like the latter; an exercise in mid-season fatigue that also had the unfortunate side effect of dragging a beloved character down with it. This week’s episode, though? So good. Just a very good and excellent return to what Supernatural does best: freaking us out, making us laugh, and giving Jared Padalecki and Jensen Ackles something fun to do. Also, you know, Sam in yogawear. 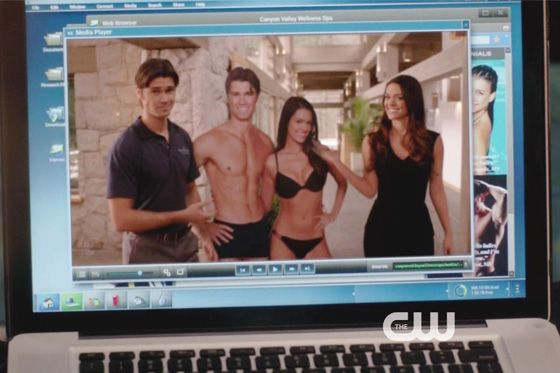 Horror and comedy are next-door neighbors in the basement of our subconsciouses, so when Supernatural finds the right combination of both, it can make for a standout episode. “The Purge” began with the perfect Supernatural setup, a classic American activity that is a rarely acknowledged nightmare: the eating contest. After a portly man takes home the crown in a hot-dog-eating contest, he’s attacked in his car by a cloaked figure who somehow sucks 200 pounds of fat out of him in about ten seconds. Spoiler: It is disgusting! The Winchesters immediately suspected that the contest runner-up, or more particularly his (don’t-say-Gypsy) wife, had exacted a Thinner-style curse, but of course, since this was only Act One, still they proved to be false suspects. That’s when the boys noticed a local spa facility promising rapid weight loss with the only side effect being an enormous suction mark, the kind also found on the body of the dead man. Next thing we knew Sam was dressed as a yoga instructor and Dean was in a hairnet, and they were gainfully employed for once! 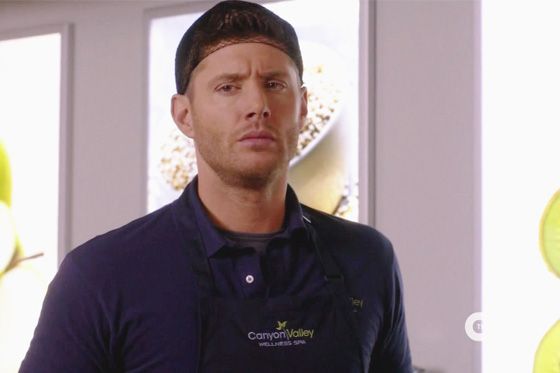 One of the sillier aspects of Supernatural has always been the Winchesters’ ease at passing as FBI agents. Putting aside Dean’s general belligerence or Sam’s Point Break-meets-Aeon Flux hairdo, not even their lines of questioning are ever remotely convincing … and they’ve been doing this for NINE years. So when “The Purge” saw them posing as a sleeveless jock and a cafeteria worker, it made me laugh how much more appropriate these covers were. Finally, something believable. No offense to the world’s most famous and prolific hunters, but if the monster-murderin’ doesn’t pan out, at least they’ll have these careers to fall back on. Just so long as they don’t eat the roofied pudding. 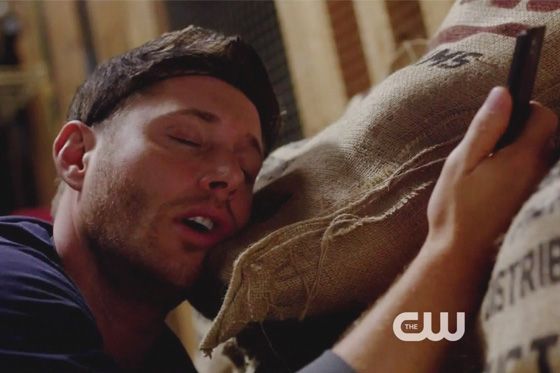 Because oh, right, this spa facility was not what it seemed! As the boys discovered, the female proprietress was something known as a Peruvian fat-sucker, and as WE discovered while seeing her in action, Peruvian fat-suckers are a total nightmare. Those white eyes and suction-cup mouth tubes? No me gusta. But the twist was that as far as Peruvian fat-suckers go, this lady was one of the GOOD ones. Her thing was co-existence, which meant only sucking ten pounds of fat from willing customers at a time. The true murderer, it turned out, was the spa owner’s ne’er-do-well brother who just could not stop himself from indulging in Minnesota’s fine selection of obese citizens. It all culminated with a surprisingly tense showdown in a shadowy basement in which the boys tangled with a fat-drunk monster. Obviously that thing was not going to get a drop of fat out of Sam Winchester, but the situation just did NOT look pleasant for anybody. 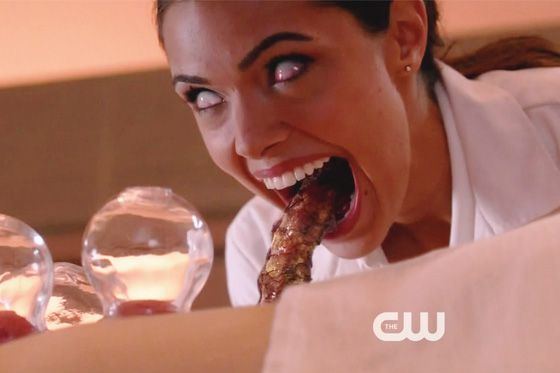 “The Purge” was a reminder of just how effective the Supernatural formula can be, complete with the traditional final-scene heaviness of a mid-season episode. Last week’s final scene found Sam insisting that he and Dean needed to stop behaving like brothers and to start behaving like co-workers. That reaction was understandable then, but this week, Sam took it in a much more dickish direction when he accused Dean of only having saved his life because Dean didn’t want to be alone. Obviously Dean had made tough calls, but to me, the worst that could be said of him was he’d tried to keep them a secret from Sam. So it struck me as totally out of line for Sam to get so nasty with Dean, and worse still when he grimly informed Dean that he would not have saved Dean’s life if the roles had been reversed. Brutal! And also, that is just straight-up not true. Sam totally would have. You know how when you’re arguing with someone and they say something completely evil and out-of-character just to win the argument? That’s what this felt like. By that I mean it felt unpleasantly real. 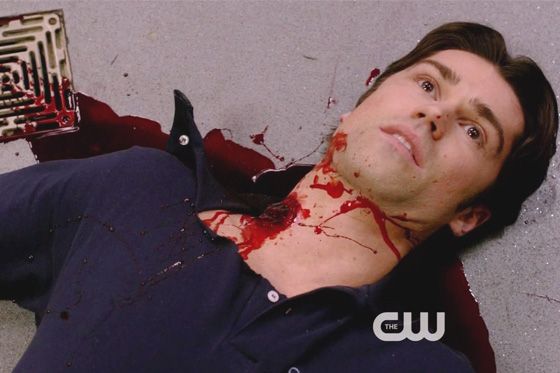 When it comes to “The Purge,” the word of the day was effective. From that final scene to all the genuinely scary scares and the genuinely funny funs (?), this felt like old-school Supernatural through and through. Plus, you know, Sam Winchester in yogawear. What kind of monster would not want to see more of that? Hunt that monster down immediately.

videology 19 mins ago
Willow and Avril Lavigne Are Pop-Punk Giants in the ‘G R O W’ Video With an appearance from fellow young punk KennyHoopla.
music videos 23 mins ago
Summer Walker and JT Pull Up With the ‘Ex for a Reason’ Video And they’re coming to you as women.
overnights 2:56 p.m.
Only Murders in the Building Season-Finale Recap: We Are All Tim Kono The finale ties up enough loose ends to satisfy but holds on to some unfinished business to keep the story going.
rock star & the mole woman 2:40 p.m.
A Timeline of Roman and Gerri’s Succession Sexual Tension For all you disgusting little slime puppies.
switched on pop 1:59 p.m.
The Escapist Male Fantasy of the James Bond Theme Song Exploring the superspy’s musical underpinnings as the Daniel Craig era draws to a close.
dunes 1:51 p.m.
What Do You Need to Know About Dune Before You Watch Dune? It’s about dunes.
the industry 1:22 p.m.
How Will Netflix Clean Up Its Latest Mess? The earnings call is today, the walkout is tomorrow, and the internal strife is not going away.
a long talk 1:12 p.m.
Sera Gamble Is Comfortable Inside Joe Goldberg’s Head You’s showrunner gives the lowdown on the low-down stalker we can’t stop watching.
By Valentina Valentini
vulture recommends 12:44 p.m.
Make Brand New Cherry Flavor Your Next Netflix Horror Binge Dropped in August, the series is perfect for spooky season.
trailer mix 12:35 p.m.
Catherine Comes for Her Crown in The Great’s Season-Two Trailer And doesn’t pass up any opportunity to insult Peter.
the view from outside 11:05 a.m.
Meghan McCain Felt ‘Slapped’ When Joy Behar Said She Didn’t Miss Her on The View And she “no longer felt safe working at The View” afterward.
wig! 10:19 a.m.
Nicole Kidman Is All Wig and No Mug in the Being the Ricardos Teaser Aaron Sorkin gives us Studio Desilu on the Sunset Strip.
book excerpt 9:00 a.m.
‘You Don’t Understand What This Is Doing to Me’ In the age of anti-heroes Tony Soprano reigned supreme. In his new book James Andrew Miller explores the toll the character took on James Gandolfini.
tv 2:32 a.m.
Well, Mel Gibson Is Starring in the John Wick Prequel The Continental The origin story will be a three-night TV event for Starz.
y'all hear this? 12:38 a.m.
The Voice’s Country Music Had Ariana Grande Ready to ‘Start Yeehaw-ing’ And fellow judge John Legend would like to remind us that he does country, too.
spooky scary Yesterday at 9:54 p.m.
Disney Welcomes Danny DeVito Into the Haunted Mansion Cast He’ll be playing a smug professor.
overnights Yesterday at 7:47 p.m.
Y: The Last Man Recap: Not Like Other Cops Wow, was I wrong when it came to Roxanne.
swoon Yesterday at 7:37 p.m.
We’re Getting a To All the Boys Spinoff Show About Kitty Song Covey Anna Cathcart will star as Lara Jean’s little sister.
overnights Yesterday at 6:52 p.m.
90 Day Fiancé: The Other Way Recap: Alina’s Mom Is My Hero Finally, Steven is destroyed.
holy moses! Yesterday at 5:27 p.m.
40 Years Later, Mel Brooks Is Making History of the World, Part II “I can’t wait to once more tell the real truth about all the phony baloney stories the world has been conned into believing are History!” Brooks said.
More Stories