No wonder Rust took off in 2002 and waited several years for the universe to right itself before he returned again. The show has finally revealed just what tore him and Marty apart — not to mention him and Maggie, and Marty and Maggie — and it’s apparent that 2002 was when up became down, black became white, etc. Even though Rust seems to be seeing clearly and speaking plainly, or at least in more illuminating metaphors, his partner and the C.I.D.’s new major (hello, Paul Ben-Victor) still act as if Cohle is sermonizing about humanity’s “secretion of sense and feeling.” Meanwhile, to anyone paying attention, Marty’s circling the drain like the personification of those soiled pants he put in the wash; yet, somehow, his rank remains unchallenged. If one takes Rust’s point of view, this could be purgatory. This could be hell. The only way we know for sure that it’s 2002 are those Segway riders shuttling within yards of Billy Lee Tuttle’s quarters.

Much of the imagery we saw in the episodes largely set in 1995 is also scarce. There aren’t too many spirals or devil’s nests occupying “Haunted Houses,” although those dreamcatchers guarding Terry Guidry’s address remind us that, in Louisiana, symbolism is spirituality. Cohle makes an unauthorized visit to ask Guidry about a son who’d gone missing some time ago; he also drops by the psychiatric institution where Kelly — the surviving girl he and Marty had found enslaved by Reggie Ledoux — now sits, catatonic, in a rocking chair. Cohle pulls meaningful scraps of information from the reluctant interview subjects, notably that Kelly’s worst tormenter had been a scarred man she now IDs as “The Giant.” But like most who encounter Rust, both Kelly and Terry quickly decide that there’s something about his way they don’t like. “Just git, before I do something to you,” warns Terry, echoing the late Dewall Ledoux’s determination that, “I don’t like your face. It makes me want to do things to it.” As for poor Kelly, she just goes wide-eyed and screams.

The one person Rust doesn’t spook is Maggie. In her own 2012 conversation with Detectives Gilbough and Papania, she talks about Cohle as a man of self-assurance, integrity, and responsibility. It makes her sound like a candidate’s wife, or, more precisely, the ex-spouse of a coward cop. Truth is, Maggie admired and wanted to consume Cohle’s trueness and present it in a box to Marty in hopes he’d wither and weep at the sight. But she also included Rust in that category of “crude men who thought they were clever” that she’d wasted so many good years (seventeen to be exact) decrypting. Her Shakespearean seduction of Rust to spite Marty was crueler in effect than intent, which even Maggie seemed to realize once she’d gathered herself in Cohle’s apartment. But this cycle had started long before she walked through Rust’s door in 2002 or raised suspicion at Marty’s telltale slacks swirling in that washing machine. And it will carry on, and Rust, Maggie, and Marty will forever be doomed and connected. That’s what Gilbough and Papania don’t know. That was the gravity keeping Rust in suspended motion and further from finding justice for those women and children. It’s why he fought so hard against its pull, nearly finding oblivion while he waited to safely re-enter their atmosphere.

As much as “Haunted Houses” can be watched through Rust’s perspective, it’s Maggie who wrests this story away from angry or inquisitive men. Her glances call and see through bullshit. She transforms from mother to Medusa when manipulated or misjudged, even if there’s more than a bit of Rust and Marty in how she waylays Gilbough and Papania’s interview with dime store-philosophy digressions. Up till this point, 37-year-old Michelle Monaghan’s relative youth alongside Woody Harrelson was a slight distraction. But in “Houses,” she towers over her muscular co-stars and makes boys of men, unlike Marty, who couldn’t even keep his lunch down after corporally punishing the teen metalheads who had statutorily raped his daughter.

Marty’s already in hell, destined to the futility of pretending he’s a better man, a smarter man — the kind of guy who wears gloves when he decks out kids in a holding cell only to fight his partner bare-knuckled in a parking lot. The kind of guy who leaves more clues than he finds, like the cell phone with naked pictures of Beth, the curvy 20-something T-Mobile staffer (and former resident of the bunny ranch from episode two that Marty had given some pity cash to, causing Cohle to quip, presciently, “Is that a down payment?”) that he’s treating with nary more respect than those dirtbags did Audrey. No wonder Audrey had such a mature impression of sexuality at such a young age. All you had to do in the Hart home was be intuitive and observant, especially when your dad lacks self-awareness and your mom only sees what’s necessary to get by. (At least Marty can spend eternity in damnation with Billy Lee Tuttle, whose cocky sneering when questioned by Cohle makes Maggie look angelic.)

Writer Nic Pizzolatto and director Cary Fukunaga, along with Harrelson, Monagahan and Matthew McConaughey (ditto Tory Kittles and Michael Potts) are in lockstep now, demonstrating what a luxury it can be when stories have a definitive start and finish. True Detective works as television because of how well it functions as a play, where no matter how big the name, everyone’s there to serve a part. And within that interior drama, a handful of messed-up protagonists search for meaning amid constantly circling misdirection. That could just as well be a metaphor for True Detective itself, and with two chapters remaining, the end’s beginning — or the beginning’s end — is unbearably near. 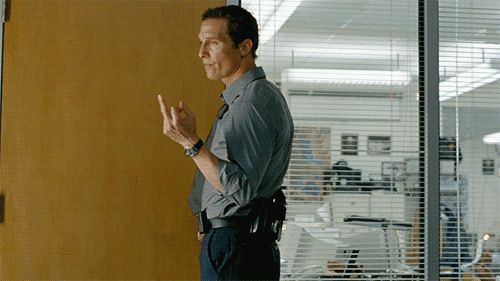 Apart from all that:

So can we assume there were devils’ nests in Danny Fontenot’s house back in ’95 because Marie went to the Tuttle school and they were some kind of arts-and-crafts project?

I still can’t get over Cohle’s words of advice for baby-murderer Charmaine: “If you get the opportunity, you should kill yourself.”

When Cohle tells Marty, “You eat your fucking young and that’s all just fine as long as you’ve got something to salute,” that seems pretty clear to me.

Are we to presume the Harts were watching The Simple Life over dinner?

And last but not least, your music footnotes for the week: Very much in the rootsy vein tonight, from Emmylou Harris’s late-nineties cut “The Good Book” and Waylon Jennings’s “Waymore’s Blues” to Father John Misty’s on-the-nose “Every Man Needs a Companion.” But also, speaking of shitty husbands, Ike and Tina’s “Too Many Tears in My Eyes.” And my latest selection that I wish we’d hear in an episode is this. Yours?

+Comments Leave a Comment
True Detective Recap: A Segway to Your Skull

camp rock and roll 14 mins ago
Demi Lovato Rocks Hard and Sins Harder on New Album Holy Fvck Therapy isn’t enough; we need to scream-belt “29.”
rap music on trial 10:03 a.m.
Everything We Know About YSL’s RICO Case Young Thug is once again denied bond after leaked discovery materials identified a witness.
you know nothing 9:47 a.m.
House of the Dragon, The First Game of Thrones Prequel, Is Here at Last All the trailers, cast, and lore, just in time for its August 21 premiere.
consolidation prizes 9:30 a.m.
CNN+ Is Back (Sort Of) The news network has its own button on Discovery+ now.
ask an expert 9:17 a.m.
Could Amber Heard Really Win Her Appeal Against Johnny Depp? The never-ending case continues — with a new twist.
into it 9:07 a.m.
Yellowstone’s Brand of White Grievance Is Free-Range and Organic A talk with Tressie McMillan Cottom about the blockbuster show’s soft politics, and whether Taylor Sheridan is “the white person’s Tyler Perry.”
tv review 8:00 a.m.
House of the Dragon Is Built on a Shaky Foundation One thing’s for certain: This prequel is definitely a Game of Thrones series. As for what else it is, that’s harder to say.
my single is dropping 12:13 a.m.
Maren Morris and Zedd Meet in the Middle Once Again for ‘Make Me Say’ The new track is Zedd’s first time returning to a collaborator.
my single is dropping 12:08 a.m.
The Born Pink Era Begins Now Blackpink drop “Pink Venom,” their first comeback single in nearly two years.
overnights Yesterday at 10:01 p.m.
Southern Charm Recap: Kiss and Yell It’s Charleston’s next-morning-brunch equivalent: everyone debriefing the previous night, hungover in their respective homes.
the law Yesterday at 10:01 p.m.
FBI Says Rust Gun Could Not Fire Without Trigger Pull Contradicting Alec Baldwin’s prior claims.
reflecting Yesterday at 9:26 p.m.
Trevor Noah Reflects on Viral Kanye West Daily Show Segment “All of us should have an opportunity at redemption.”
overnights Yesterday at 9:00 p.m.
Rap Sh!t Recap: #MiaCulpa Mia becomes social media’s main character.
want the world to kno-ow Yesterday at 6:32 p.m.
Tevin Campbell Is Ready to Come Out — Officially “Every person in the world isn’t straight. Get over it,” said the “Can We Talk” singer.
so random Yesterday at 6:29 p.m.
The Biggest Plot Twists in the Simon & Schuster Antitrust Trial The publishing world’s inner workings come to light.
damage control Yesterday at 5:57 p.m.
Brad Pitt’s Foundation Settles With Katrina Victims for $20.5 Million He and his Make it Right Foundation were sued for building poorly constructed homes after the hurricane.
media news media news Yesterday at 3:50 p.m.
Reliable Sources at CNN Say Reliable Sources Is Done CNN is saying good-bye to both the show and its host, Brian Stelter.
overnights Yesterday at 3:49 p.m.
American Horror Stories Recap: Reflection and Refraction Bloody Mary … Bloody Mary … Bloody ahh, we’re too scared to say it!
overnights Yesterday at 3:48 p.m.
Pretty Little Liars: Original Sin Recap: Knives Akimbo Our Final Girls are making some astounding leaps of logic.
tributes Yesterday at 3:30 p.m.
Ellen DeGeneres, Rosanna Arquette, and More Remember Anne Heche “This is a sad day.”
More Stories