The fact that NBC has scheduled Hannibal’s second season for Friday nights means one of two things: Either the network brass holds low hopes for the macabre drama, or they’re banking on fans embracing the Friday-night-fright aspect of its new time slot. Regardless of the reason, you should catch tomorrow night’s season premiere — Vulture’s TV critic called it the second best show of 2013. But just in case all of last year’s grisly murders scrambled your brain, here’s a rundown of where the show’s characters currently stand.

Will Graham
Where we left him: After a severed ear turned up in Graham’s kitchen sink, Jack Crawford hauled him in for the disappearance of Abigail Hobbs. And once the CSI guys found remains on Will’s handmade fishing lures from Cassie Boyle, Dr. Sutcliffe, Marissa Schur, and Georgia Madchen — all butchered by Hannibal Lecter, as the audience has known for many episode — Graham was assumed to be the copycat killer. Escaping a police vehicle, Graham got Hannibal to accompany him to the Hobbs house in Minnesota. (Side note: These people act like Minnesota’s three exits down the interstate from the D.C. area.) There, Graham finally realized it was Hannibal who warned Hobbs that law enforcement was closing in on him. He drew his gun on Hannibal only to be shot in the shoulder by an in-the-nick-of-time Jack. Graham was then hospitalized for encephalitis, which was ultimately identified as the cause of his mental troubles, before being locked up in the Baltimore State Hospital for the Criminally Insane.
Where we hope he’s headed: The conundrum of the second season will be, how does Graham get out of custody unless the others finally figure out that Hannibal’s really the murderer? And how does the rest of the team reach that conclusion when they’ve just locked up their best shot at figuring that out? Also, we hope Graham at least gets to spend some quality time with his dogs.

Dr. Hannibal Lecter
Where we left him: With Graham fingered for the murders he committed, Hannibal is more a member of the inner circle than ever before. His only adversary at this point may be Dr. Du Maurier, who’s at least vaguely aware of his Mr. Hyde side. Speaking of, he’s the last person to have seen Abigail alive.
Where we hope he’s headed: To prison (although not likely)? To the top of the FBI food chain (no pun intended)? Back to Minnesota, because that just seems to be a thing people do on this show? The ever-slippery Lecter could wind up anywhere this season, and we’re happy to be kept guessing.

Jack Crawford
Where we left him: Convinced he’s got his copycat killer behind bars, he’s more trusting of Hannibal than ever before. This guy maybe does not have such good investigative instincts.
Where we hope he’s headed: Crawford really sold Graham down the river in the season finale. His ability to coolly and swiftly turn his back on his most trusted investigator — as well as his thick-headed insistence that he did nothing wrong in pushing the mentally fragile Graham to his breaking point — was a bit jarring. It makes rooting against him sound like a fun way to head into the second season. (Maybe he’ll become Hannibal’s new target/object of fascination?) Meanwhile, what happened to Crawford’s cancer-battling wife? Can we please see that story line play out? It might help him curry sympathy again.

Dr. Alana Bloom
Where we left her: Bloom lobbied Crawford and Hannibal hard to get Graham a proper diagnosis for his psychotic and possibly murderous behavior, which led to his hospital stay for encephalitis. She’s already admitted to Graham that she has both feelings for him and reservations about getting involved with him, but her emotional breakdown in her car during last season’s finale hints that she may be falling deep for him now. Who doesn’t love a man in (asylum inmate) uniform?
Where we hope she’s headed: Bloom is the only person still campaigning for Graham’s innocence. Her voice as lone dissenter may prove critical in the episodes ahead. As for the Will-Alana romance, we’re on board, if only because we’re dying for a bit of sweetness and light. Can’t you just see them doing the whole making-pancakes-in-the-morning-while-she- wears-his-shirt-from-the-night-before thing?

Abigail Hobbs
Where we left her: In Minnesota. After traveling there with Graham in the first season’s penultimate episode, she stayed behind and encountered Dr. Lecter, who confessed to being her father’s copycat killer. When Hobbs asked if she was about to become his next victim, Hannibal cryptically replied that he’s just sorry he couldn’t protect her. While her severed ear was positively identified during the season finale, the rest of her has yet to surface.
Where we hope she’s headed: Not-the-morgue would be a nice place for her to turn up after her absence from the season finale. Not only did Hobbs serve as a spunky counterpoint to Graham, Lounds, and Hannibal, but she’d started to evoke regrets from Hannibal that he never had children of his own, which could play out in the second season as an ever-intensifying pas de deux.

Freddie Lounds
Where we left her: A couple of episodes before the finale, the true-crime blogger was detained by Gideon to serve as nurse in his Abandoned Observatory of Horrors and was keeping Dr. Chilton alive with a hand-pumped respirator. She’s also supposed to be writing a book with Abigail Hobbs, but, um, hopefully she can get her manuscript deadline pushed back?
Where we hope she’s headed: First of all, back to Fred Segal or Cruella De Vil’s House of Vamp or wherever it is she shops for those luscious femme-fatale outfits. Other than that, there’s no need to hope for where Lounds may be headed, because she’s like that cheap mantra people throw around about mindfulness: Wherever you go, there she is. 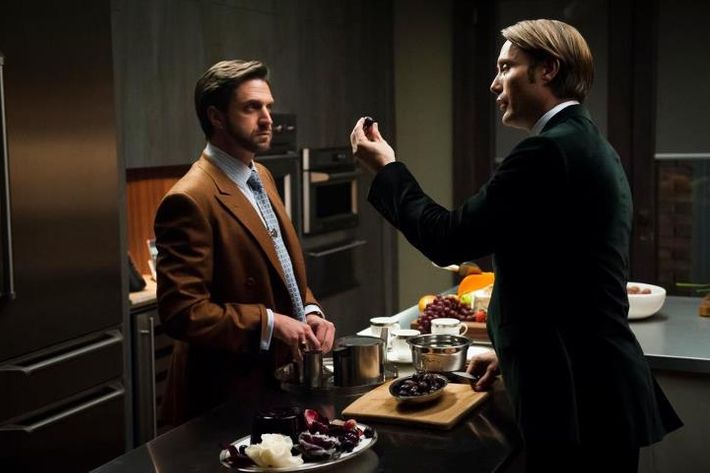 Dr. Frederick Chilton
Where we left him: Clutching his eviscerated innards after Gideon used him as his personal Operation game board in the observatory.
Where we hope he’s headed: Good doctor, get thee to a transplant center!

Beverly Katz
Where we left her: The usual, just doing her specimen-collectin’ and drawin’ a paycheck, although she nearly walked off the job in disbelief when faced with scraping dried-blood samples from under Graham’s fingernails.
Where we hope she’s headed: Higher up on the writers’ priority list! On paper, Beverly may just be your average sassy CSI chick, but on screen she’s a vital, refreshing spark. Can she have more to do in the second season? Even if it’s being stalked by a serial killer? 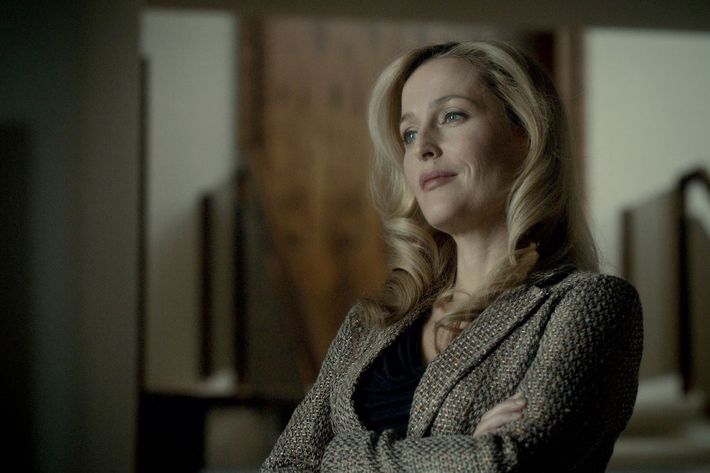 Dr. Bedelia Du Maurier
Where she left off: After receiving an unexpected house call from Hannibal, who brought over dinner (was it Hobbs??) under a bell-shaped glass dome, Dr. Du Maurier intimated she knows more about Hannibal’s shady background — and his tendency to develop relationships with patients prone to violence — than she’d previously let on.
Where we hope she’s headed: With Will locked up for now, perhaps Du Maurier can be brought onboard the Chesapeake Ripper investigative team. Jack’s already turned to her for leads on more than one occasion, and we all know how easily he forges (and then forgets) his loyalties. Imagine the battle of wits between her and Hannibal. What a sangfroid showdown that would be!

+Comments Leave a Comment
Refresher: Where Did NBC’s Hannibal Leave Off?