I’ve been thinking a lot about that Future Islands Letterman performance from a few weeks ago, because (a) that song is a jam; (b) that performance is epic; and (c) as the great Foster Kamer has explained better than I ever could, the whole thing is such a pure expression of joy and hope and ambition and sincerity, it’s straight-up startling. It’s no wonder it’s become such a sensation; we see such things so rarely, we don’t know what to do with them besides point and laugh and share. We’re still bullies, much as we like to pretend we’re more evolved than that, and we’re keeping each other from being our best selves.

It’s a shame, because this world needs pure expressions of joy and hope and ambition and sincerity. We lose a dimension without them. We’ve lost that dimension already; we can connect with each other more quickly and easily and in more ways than we’ve ever been able to in human history, but we’re so afraid of opening up, of looking uncool, of dancing like nobody’s watching because someone may be taping and uploading it, that we can’t connect with each other. We’re so technologically advanced, we’ve become 12-year-olds in the first half-hour of a junior-high mixer.

Obviously, the implications of this are far-reaching, but I’m pointing them out here because they’re starting to affect my American Idol experience, and I’m sick of it. The Idols of season 13 are on the biggest stage they’ve ever played, singing for the most people they ever have and probably ever will, and yet so many of them seem so ambivalent about it. Is it a collective case of stage fright, or is this just the way it’s going to be from now on? Are we so afraid of our need for acceptance that we can’t even beg for acceptance on a show that is a literal, large-scale plea for acceptance? Fuck that; get rid of Randy and install the Future Islands guy as mentor. Make the Future Islands guy all three judges. These kids need a fraction of his spirit — right now — or they’re doomed, and though I wouldn’t have said it at the beginning of the season, the overall prognosis for Idol isn’t so hot either.

Okay, I needed to get that off my chest. It’s been bothering me, and also the results shows are only 30 minutes now, so there’s not much to talk about here. There’s never much to talk about in these results shows. It’s a blessing that they’re cut in half now, but they really could be two minutes long. (Actually, they could also be a text message you get every Thursday, but whatever.)

Randy, who is not in any way connected to Future Islands, and who therefore has no business talking about performance, gives his review of last night’s show, and he’s right on the money: Jena, Malaya, and Caleb were the front-runners, and everyone else needs to catch up. This does not reflect any shrewdness on Randy’s part; last night’s front-runners were just that obvious.

And indeed, once the names of the safe Idols start to be revealed, there are no surprises: Jena is safe, so is Malaya, and … we’ll find out the rest after the break.

Janelle Monae gives a performance of her new single “What Is Love,” from the Rio 2 soundtrack. Now, Janelle Monae is a perfect example of a performer who gives it everything, who has never compromised her vision or her sincerity, and suddenly the world is at her feet. And while a big, splashy soundtrack single is maybe not the best fit for her, and if it forces her to have to dial back the sci-fi theatrics a tiny bit, she’s still someone the top nine need to be studying. Like, seriously studying. They need to be cramming for the Janelle Monae test. Actually, they need to be told there will be a Janelle Monae test.

The names of the survivors keep coming — tonight, instead of having Ryan say the names out loud, their faces are revealed on the IdolTron, so that’s an exciting twist. Here are the next few faces: Alex, Jessica, Caleb, Dexter. So our bottom three is Sam, Majesty, and CJ. Harry says it means that people are really voting by what the Idols do each week, but I think it’s more because we don’t have a real fan favorite yet.

And singing for the save will be … Majesty. She does a notably sodden version of Pharrell’s “Happy” that contains exactly zero correct notes, and when she goes for a big moment (which this song absolutely does not require), here’s what we see from Jennifer: 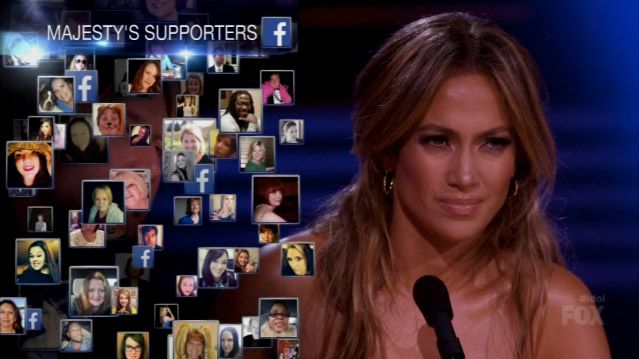 Ouchers. By the way, since it’s obvious that “Weird Al” Yankovic will eventually do a parody of “Happy,” may I suggest that it be called “Cathy,” and that it be about the Cathy Guisewite comic strip? Or do I have to do everything around here?

Anyway, it’s no big surprise when Keith reveals that saving her is not what they feel like they want to do. She’s good about it, even saying “Thank you for being my friend, Ryan,” which is such a preschool-teacher thing to do (in a good way). I do believe there’s a future for ol’ Maj, but this just wasn’t the season for her.

And then Ryan throws to the new Fox sitcom Surviving Jack, except he calls it Saving Jack because like everyone else, he’s pretty much given up. Back to the Future Islands album I go.

penn b 14 mins ago
Cardi B And Penn Badgley Fangirl Over Each Other On Twitter Cardi B and Penny B collab coming soon!
hollywood connections 7:33 p.m.
Mama HAIM Taught Art to Paul Thomas Anderson, says Baby HAIM “I drink your milkshake” was actually a quote from the playground.
uba+ 6:20 p.m.
Katie Couric Calls Matt Lauer’s Behavior ‘Devastating But Also Disgusting’ The Morning Show, it turns out, is a documentary.
overnights 5:15 p.m.
I Know What You Did Last Summer Recap: She So Wishes She Was You The longer the show goes on, the messier it feels.
videology 3:17 p.m.
Willow and Avril Lavigne Are Pop-Punk Giants in the ‘G R O W’ Video With an appearance from fellow young punk KennyHoopla.
music videos 3:12 p.m.
Summer Walker and JT Pull Up With the ‘Ex for a Reason’ Video And they’re coming to you as women.
overnights 2:56 p.m.
Only Murders in the Building Season-Finale Recap: We Are All Tim Kono The finale ties up enough loose ends to satisfy but holds on to some unfinished business to keep the story going.
rock star & the mole woman 2:40 p.m.
A Timeline of Roman and Gerri’s Succession Sexual Tension For all you disgusting little slime puppies.
switched on pop 1:59 p.m.
The Escapist Male Fantasy of the James Bond Theme Song  Exploring the superspy’s musical underpinnings as the Daniel Craig era draws to a close.
dunes 1:51 p.m.
What Do You Need to Know About Dune Before You Watch Dune? It’s about dunes.
the industry 1:22 p.m.
How Will Netflix Clean Up Its Latest Mess? The earnings call is today, the walkout is tomorrow, and the internal strife is not going away.
a long talk 1:12 p.m.
Sera Gamble Is Comfortable Inside Joe Goldberg’s Head You’s showrunner gives the lowdown on the low-down stalker we can’t stop watching.
By Valentina Valentini
vulture recommends 12:44 p.m.
Make Brand New Cherry Flavor Your Next Netflix Horror Binge Dropped in August, the series is perfect for spooky season.
trailer mix 12:35 p.m.
Catherine Comes for Her Crown in The Great’s Season-Two Trailer And doesn’t pass up any opportunity to insult Peter.
the view from outside 11:05 a.m.
Meghan McCain Felt ‘Slapped’ When Joy Behar Said She Didn’t Miss Her on The View And she “no longer felt safe working at The View” afterward.
wig! 10:19 a.m.
Nicole Kidman Is All Wig and No Mug in the Being the Ricardos Teaser Aaron Sorkin gives us Studio Desilu on the Sunset Strip.
book excerpt 9:00 a.m.
‘You Don’t Understand What This Is Doing to Me’ In the age of anti-heroes Tony Soprano reigned supreme. In his new book James Andrew Miller explores the toll the character took on James Gandolfini.
tv 2:32 a.m.
Well, Mel Gibson Is Starring in the John Wick Prequel The Continental The origin story will be a three-night TV event for Starz.
y'all hear this? 12:38 a.m.
The Voice’s Country Music Had Ariana Grande Ready to ‘Start Yeehaw-ing’ And fellow judge John Legend would like to remind us that he does country, too.
spooky scary Yesterday at 9:54 p.m.
Disney Welcomes Danny DeVito Into the Haunted Mansion Cast He’ll be playing a smug professor.
More Stories