When I first saw Divergent, I was struck by how familiar the film felt, and not simply because I’d seen so many of its YA themes before in movies like The Hunger Games, Harry Potter, and Twilight. I didn’t realize what was triggering that strong sense of déjà vu until the sixth or seventh training session where Tris competed against her athletic, adrenalized Dauntless comrades, then crowded around a scoreboard afterwards to see how she fared. Holy shit, I realized, Tris is basically in CrossFit. (And it is kicking her ass.) You can find just about any metaphor in this postapocalyptic tale if you’re looking hard enough, but the stuff about CrossFit, the popular, hyper-intense workout regimen, is so palpable that I’m starting to wonder whether I’ll run into Veronica Roth at my next WOD. Here are eight eerie similarities between CrossFit and Dauntless.

1. All the Core-Adjusting
Every time Tris thinks she’s got the hang of her Dauntless training, along comes Four to fix her with a “you’re doing it wrong” glower and two hands on her waist to adjust her core. “Keep tension here,” he CrossFit-speaks to her, those big meaty Mr. Pamuk paws on her tiny torso. Trust us, Four, she’s definitely feeling the tension. 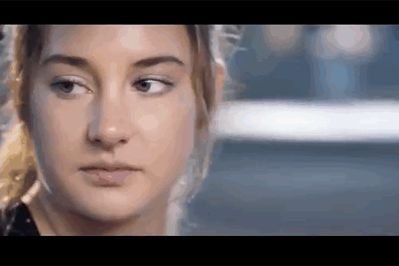 2. They Won’t Stop Talking About It
“I’m Dauntless.” “I’m going to be Dauntless.” We get it, Tris. Like, stop posting about Dauntless on Facebook every day. You don’t always have to check in when you go to the Pit, okay?

3. All the Tattoos
“Let’s all get tattoos!” Tris exclaims like an eager CrossFit newb. True to form, her entire faction is filled with ill-advised ink, from Four’s massive back tattoo to whatever the hell is going on with Jai Courtney’s Eric. I’m not sure what Eric’s deal is or why he thought that a Hitler Youth faux-hawk and bar codes tattooed up and down his neck was a good look, but I do know that he’s basically that one straight-edge guy in your CrossFit group who has several deeply uncomfortable facial piercings and screams really loudly whenever he does the clean and jerk. Settle down, bro: We’re all just trying to make it through the morning WOD without some jacked-up dude orgasm-bellowing next to us. 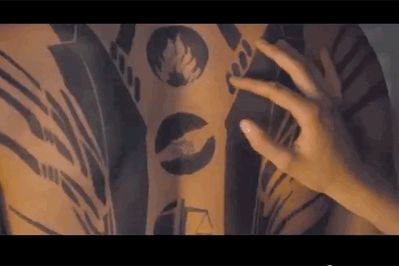 4. Diet
Of course Tris doesn’t recognize the hamburger she’s served in the Dauntless cafeteria: A burger is supposed to have buns! But you know how Dauntless is about carbs. And don’t even get them started on gluten, which they hate even more than Jeanine Mathews hates those Little House dorks from Abnegation.

5. Where They Work Out
Like, is this the Pit, or is it the abandoned Pinkberry where I do CrossFit? I’m honestly not sure.

6. The Recovery Time
After a particularly intense boxing match with Miles Teller, Tris wakes up in the infirmary feeling groggy and stiff, then asks Zoe Kravitz how long she’s been unconscious. “You’ve been borderline dead for 24 hours, but your hair looks amazing,” Zoe answers, more or less. Anyone who’s still recovering from their first day at CrossFit will know that “just emerged from a coma and maybe I should have signed a DNR beforehand” feeling, as well as the all-too-accurate aftermath where hobbled Tris still shows up for the next session.

7. All the Running
These people run everywhere. It is their No. 1 most favorite activity besides jumping, because everyone in Dauntless is just a Super Mario Bros. character with the B-button held down. They will run to catch the train. (Guys, just download the schedule online, it’ll save you so, so much trouble.) They will run into the city just to attend a boring, three-hour ceremony where teenagers stare at bowls. Every situation presents an opportunity for Dauntless to cross-train, especially if they are literally crossing trains while doing it. 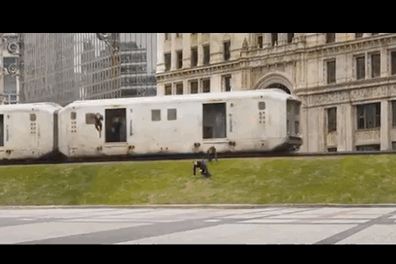 8. The Whole Faction Thing
The Dauntless crew is wary of those who choose Erudite or Candor, just as CrossFitters side-eye friends who swear by Pilates, P90X, or Zumba. Anyone who would dare to pull a Divergent by heading from a CrossFit session to SoulCycle to yoga truly does deserve to be shot on sight, so I’m totally onboard with Kate Winslet on that one.

+Comments Leave a Comment
I Think Divergent Is Secretly About CrossFit

trailer mix 6:48 p.m.
Kristin Cavallari Struts Into The Hills: New Beginnings Season-Two Trailer Premiering Wednesday, May 12.
avatar 5:23 p.m.
Shailene Woodley and Aaron Rodgers Are Disney Vloggers Now This is the most magical interview on earth.
vulture recommends 1:54 p.m.
‘Cocktails & Dreams’ is Happy Endings at Its Most Potent This a-mah-zing sitcom premiered ten years ago today.
not a kesha song 1:33 p.m.
Just How Bad Are the Lyrics to Mick Jagger and Dave Grohl’s ‘Eazy Sleazy’? Are they eazy to listen to, or do they just make us feel sleazy?
trailer mix 1:31 p.m.
The Hitman’s Wife’s Bodyguard’s Trailer’s Blog Post Can bodyguards take “sabbatical”?
viewing guide 1:22 p.m.
Which 90 Day Fiancé Spinoffs Are Worth the Subscription? Six new series, six new ways to ensure your 90 Day journey never has to end.
the hot duke 12:43 p.m.
Shonda Rhimes Was ‘Shocked’ Fans Revolted After Regé-Jean Page Left Bridgerton “So yeah, I was like, whoa!”
into the snyder-verse 12:11 p.m.
Zack Snyder’s Army of the Dead Trailer Has Zombie Lovers and a Zombie Tiger Also, Tig Notaro is an action star now.
kellyoke 11:24 a.m.
Kelly Clarkson Blazes Through a ‘Gaslighter’ Cover for Kellyoke We’re sure it’s just a coincidence the recently single host has chosen this song.
hot pod 11:20 a.m.
Welcome (Back) to Depresh Mode How one podcaster revived his show after losing his job (and his old podcast feed).
fandom 10:31 a.m.
Lady Gaga Loves How Much (Some of) You Still Love ARTPOP Fans got the 2013 album into the top three on iTunes after a petition asked for an “Act II.”
encounter 10:05 a.m.
Talking Papaya Salad and Scalloped Potatoes With Pepper Teigen A quick cooking lesson with Chrissy’s spice-loving mom.
By Juliet Izon
oscars 2021 10:00 a.m.
The One Scene That Best Represents Each 2021 Best Picture Nominee Here are our picks for the singular scenes that Oscar should use to represent each Best Picture nominee at this year’s Academy Awards.
switched on pop 9:46 a.m.
5 Rules of Great Songwriting Collabs, According to Teddy Geiger and Dan Wilson “I don’t want to just make another one of ‘those.’”
By Charlie Harding and Nate Sloan
shondaland 9:43 a.m.
Bridgerton Will Come Again Twice It’s been renewed for seasons three and four.
hardware 9:00 a.m.
The New Roku Remote Has a Fancy Apple TV Button The move underscores Roku’s importance in the streaming universe.
profile 8:00 a.m.
Esther Perel Goes Off Script She became today’s most famous couples therapist by ignoring all the rules of the trade.
american idol 1:59 a.m.
Paula Abdul Wishes ‘STD’ Simon Cowell Could Have Joined Her American Idol Return Abdul joked about missing her “super, talented, debonair” former co-star while filling in for current host Luke Bryan.
apologies 12:37 a.m.
Hank Azaria Wants to ‘Personally Apologize’ to Every Indian Person for Apu “It’s important. I apologize for my part in creating that and participating in that.”
movie theaters Yesterday at 10:02 p.m.
L.A.’s Beloved ArcLight Cinemas, Pacific Theatres Will Close Permanently “Despite a huge effort that exhausted all potential options, the company does not have a viable way forward.”
More Stories