What exactly do we know about the human soul? We know science has proven that it weighs 21 grams (is a Naomi Watts film considered science?), but what does it actually look like? Some people think the soul looks like sparkling light, or maybe a you-shaped ghost, but I’ve always imagined it looks like the wad of bubblegum we each carry around in our tum-tums for those seven years after we swallow it. If you are already saying out loud “but the seven-year bubblegum thing is an old wives’ tale,” then guess what, so are souls. Ha-ha, just kidding, don’t tell my youth pastor I said that. I am already in enough trouble for watching Supernatural so much. Which, oh yeah, this week’s episode of Supernatural was all about human souls! Souls on Supernatural do not look like wads of bubblegum. They look sort of dumb, to be honest, just floating balls of light that make tinkling noises and go into peoples’ mouths. But who cares what souls look like as long as everything surrounding them is as entertaining as this week’s episode was?

“Mother’s Little Helper” was another rock-solid late-season episode that finally explained more about how Abaddon came to massacre the Men of Letters all those years ago and further explored just what she’s up to in her current scheme to take back Hell. (And if everything seemed more quirkily handsome than usual, that’s probably because Misha Collins directed the episode!) Like many mythology episodes, the cold-open wasn’t particularly outlandish; just a friendly housewife murdering her husband for complaining about having to eat meat loaf too often. Personally, I would not murder somebody for that reason, but it’s even less likely that I would ever complain about eating too much meat loaf, so I didn’t really relate to either of these people. But Sam immediately suspected that paranormal mischief was afoot, and he took the opportunity to investigate alone, which had the added benefit of getting away from Dean, who’d been grumpin’ around headquarters lately. 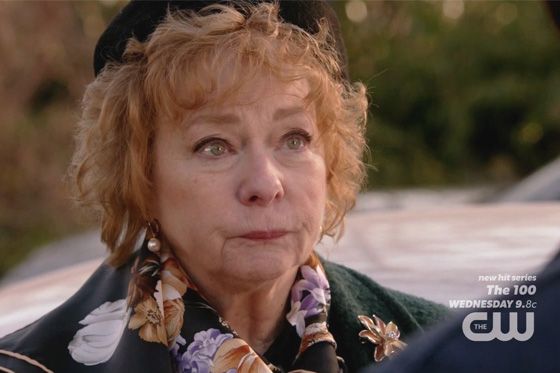 After Sam arrived in a small town called Milton (which is a very obscure literary reference, I’ll explain later), he discovered that the murderous housewife had committed suicide in jail after scrawling frightening curse words all over her cell. Other townsfolk had begun to exhibit similar behavior, and Sam was baffled about their lack of demon odors or black eyeballs. But when a kindly, well-dressed old woman showed up at the police station yammering about demons, Sam took a knee and listened to her story. From there, we flashed back to olden times (the ‘50s), when she was a young nun at a convent and bore witness to the arrival of two Men of Letters trainees sent to investigate a recent double-murder within the convent. These trainees? None other than Henry Winchester and a pre-Abaddon-meatsuit Josie Sands in nun drag! You might be surprised to learn this, but Abaddon has the better personality, it turns out. Still, though, Josie seemed like a very nice lady and probably could have been a great Female Man of Letters if not for Abaddon’s decision to become a leggy ginger. 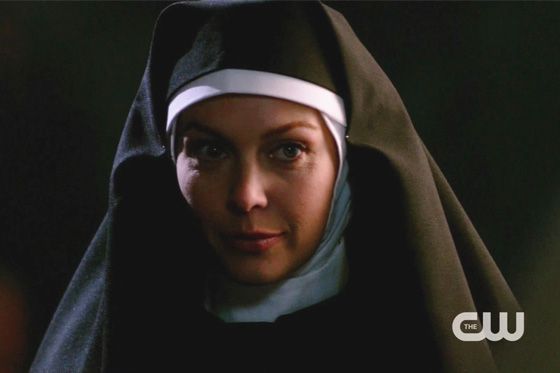 The extended flashback revealed that, essentially, Abaddon had been harvesting souls, thus rendering their previous owners slightly more bloodthirsty versions of soulless Sam Winchester from all those seasons ago. But a basement brawl with Abaddon rendered Henry unconscious, and Josie had no choice but to volunteer to become possessed in order to keep him safe. (Ugh, unrequited crushes make us do such foolish things.) So that explained how Abaddon came to infiltrate the Men of Letters, but why was soul-harvesting happening again in the present day? Sam visited that old, broke-down convent and discovered one of the original demonic nuns was still harvesting souls and keeping them in tidy glass jars! Fortunately, the demon nun was forthcoming with exposition and Sam learned that Abaddon had commissioned soul-harvesting operations all over the world in order to convert captured souls into demons for her new army. Suddenly, a small-town possession case started feeling much more epic and end-gamey! If it wasn’t already clear before, Abaddon definitely needed to be stopped now.

Sam had no trouble defeating this particular soul-harvesting nun (thanks mostly to a pre-recorded demon-expulsion chant on his cell phone), but when Sam released all the captured souls and they floated across town to hop into their owners’ mouths, I have to say I was really impressed by Supernatural allowing innocent bystanders to actually survive an episode. The amount of collateral damage on this show would make a despot giggle, and it’s rare that we actually get to see people reattain their humanity after a supernatural run-in. As much as it was kind of cringe-worthy to see these glimmering Lisa Frank-style orbs representing the human soul, at least they provided some people with happy endings. Of course, these people had murdered their friends and family and would now have to live in that reality, but still. Innocent people surviving a Supernatural episode? Unheard of! 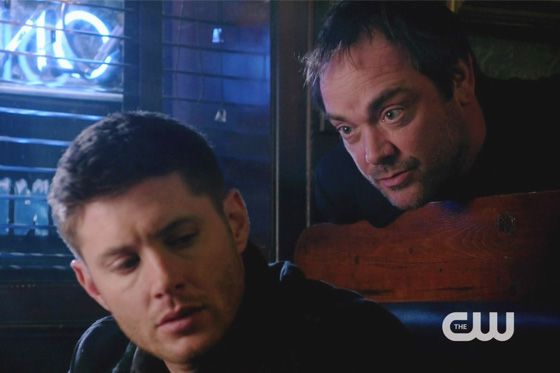 Meanwhile, Dean spent much of the episode feeling stressed out about how the Mark of Cain made him want to murder his brother. This plot line is definitely taking a turn for the Smeagol, where Dean is now fighting an obsession with the First Blade knowing that it will only corrupt him and lead him headfirst into bad times. In a moment of weakness, though, he called up Crowley to perhaps commiserate about addiction, and the two ended up spending tons of quality time in a local dive bar having circular conversations about how Dean hated Crowley, but Crowley knew that Dean needed his help, etc. Things finally took an interesting turn when Dean spotted a fellow hunter gearing up to murder Crowley in the bathroom, only to talk the hunter out of it. The twist was that the hunter was a demon working for Crowley and the whole thing had been some kind of test of Dean’s resolve. Maybe? I’m not 100 percent sure. Whatever Crowley wanted to find out about Dean, he was satisfied with the results and even referred to he and Dean as “besties.” Ironic square quotes his, probably, but still. He now knew that Dean was looking out for him, for better or worse. 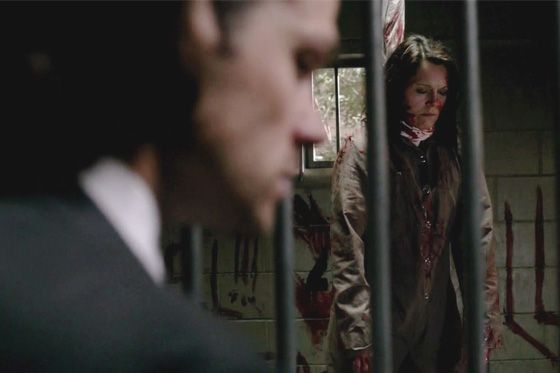 “Mother’s Little Helper” was a tight hour of reveals and explanations, and made me excited for the final end-run of the season. Whereas a lot of the angel mythology has receded in favor of this upcoming Abaddon face-off, it efficiently set the stage for what will be a presumably tense and painful Winchester vs. Winchester final fight. The corruptive powers of an ancient artifact isn’t exactly the newest story line, but it feels especially appropriate for this series. The episode ended with the two brothers, still tense with discomfort around each other, nonetheless working together against Abaddon. No angsty arguments, no tense side-of-the-road introspection. Just two guys with issues quietly uniting for a common cause. Even in their darkest moods, their souls are probably still so sparkly.

videology 17 mins ago
Willow and Avril Lavigne Are Pop-Punk Giants in the ‘G R O W’ Video With an appearance from fellow young punk KennyHoopla.
music videos 21 mins ago
Summer Walker and JT Pull Up With the ‘Ex for a Reason’ Video And they’re coming to you as women.
overnights 2:56 p.m.
Only Murders in the Building Season-Finale Recap: We Are All Tim Kono The finale ties up enough loose ends to satisfy but holds on to some unfinished business to keep the story going.
rock star & the mole woman 2:40 p.m.
A Timeline of Roman and Gerri’s Succession Sexual Tension For all you disgusting little slime puppies.
switched on pop 1:59 p.m.
The Escapist Male Fantasy of the James Bond Theme Song Exploring the superspy’s musical underpinnings as the Daniel Craig era draws to a close.
dunes 1:51 p.m.
What Do You Need to Know About Dune Before You Watch Dune? It’s about dunes.
the industry 1:22 p.m.
How Will Netflix Clean Up Its Latest Mess? The earnings call is today, the walkout is tomorrow, and the internal strife is not going away.
a long talk 1:12 p.m.
Sera Gamble Is Comfortable Inside Joe Goldberg’s Head You’s showrunner gives the lowdown on the low-down stalker we can’t stop watching.
By Valentina Valentini
vulture recommends 12:44 p.m.
Make Brand New Cherry Flavor Your Next Netflix Horror Binge Dropped in August, the series is perfect for spooky season.
trailer mix 12:35 p.m.
Catherine Comes for Her Crown in The Great’s Season-Two Trailer And doesn’t pass up any opportunity to insult Peter.
the view from outside 11:05 a.m.
Meghan McCain Felt ‘Slapped’ When Joy Behar Said She Didn’t Miss Her on The View And she “no longer felt safe working at The View” afterward.
wig! 10:19 a.m.
Nicole Kidman Is All Wig and No Mug in the Being the Ricardos Teaser Aaron Sorkin gives us Studio Desilu on the Sunset Strip.
book excerpt 9:00 a.m.
‘You Don’t Understand What This Is Doing to Me’ In the age of anti-heroes Tony Soprano reigned supreme. In his new book James Andrew Miller explores the toll the character took on James Gandolfini.
tv 2:32 a.m.
Well, Mel Gibson Is Starring in the John Wick Prequel The Continental The origin story will be a three-night TV event for Starz.
y'all hear this? 12:38 a.m.
The Voice’s Country Music Had Ariana Grande Ready to ‘Start Yeehaw-ing’ And fellow judge John Legend would like to remind us that he does country, too.
spooky scary Yesterday at 9:54 p.m.
Disney Welcomes Danny DeVito Into the Haunted Mansion Cast He’ll be playing a smug professor.
overnights Yesterday at 7:47 p.m.
Y: The Last Man Recap: Not Like Other Cops Wow, was I wrong when it came to Roxanne.
swoon Yesterday at 7:37 p.m.
We’re Getting a To All the Boys Spinoff Show About Kitty Song Covey Anna Cathcart will star as Lara Jean’s little sister.
overnights Yesterday at 6:52 p.m.
90 Day Fiancé: The Other Way Recap: Alina’s Mom Is My Hero Finally, Steven is destroyed.
holy moses! Yesterday at 5:27 p.m.
40 Years Later, Mel Brooks Is Making History of the World, Part II “I can’t wait to once more tell the real truth about all the phony baloney stories the world has been conned into believing are History!” Brooks said.
More Stories