On last night’s True Detective, Rust Cohle began to tie up some of the show’s many loose ends. He implicated some people in the Dora Kelly Lange case and, more important, decoded the purported serial killers’ fondness for off-beat headwear.

As it turns out, the show’s recurring motifs — blindfolds, macabre animal masks, and those dreaded antlers — are actually peripherally related to bona fide traditions in rural Cajun culture. Are you ready for a sociology lesson? Let’s begin! 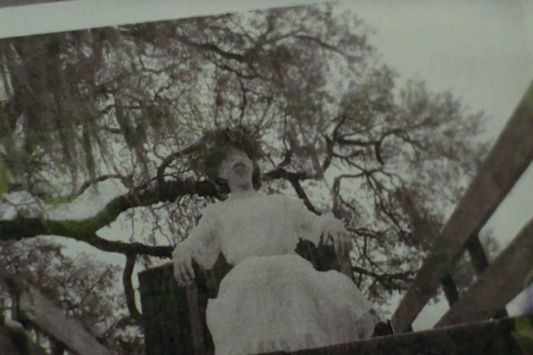 As Cohle explains, the Tuttles come from a small township near Erath (a real town in southern Louisiana with a recorded population of 2,187) which “had a very rural sense of Mardi Gras, you know, the men on horses, animal masks and such.” Marty knows what he’s talking about; the tradition of which he speaks is called Courir de Mardi Gras. We then see two photos from the area’s winter festival featuring revelers bedecked with masks, antlers, and blindfolds, implying some sort of link between the show’s creepily curated killings and the Mardi Gras traditions of the Tuttles’ hometown. (A photo depicting Courir de Mardi Gras also popped up in episode two, when our detectives visit Dora Lange’s mother. Narrative time is a flat circle.)

We already know that True Detective is a show that cribs from a lot of extratextual sources, and this is no exception. The Courir de Mardi Gras, or “Mardi Gras run,” is a real tradition that takes place in the rural Cajun communities of southern Louisiana (the celebration was also depicted in a season-two episode of Treme). Courir de Mardi Gras is a run beginning at sunrise on Fat Tuesday (the English translation of Mardi Gras, which this year falls tomorrow, March 4), and traditionally acted as a means for participants to collect ingredients for a communal gumbo. Horseback riders would stop at farms throughout the community and pick up ingredients like chicken, rice, and sausage. Nowadays, the celebration has evolved into a more symbolic parade, with costumed revelers on foot, on horseback, and in trailers traveling the countryside from farm to farm and “dancing for a chicken.”

Unlike those from New Orleans Mardi Gras, the costumes of Courir de Mardi Gras tend to skew more basic and homemade, fashioned from whatever odds-and-ends people have lying around. Participants wear masks to conceal their identities — Mardi Gras is one of the few exceptions to a Louisiana law prohibiting the wearing of masks and hoods in public — and typical costumes include tall pointed hats called capuchons, bright colors and fringes, and animal features (there is no specific proclivity for antlers). It is important to note that the real-life Courir de Mardi Gras is merely a festive way to let off steam before the privations of Lent, and has nothing to do with murder or creepy rape cults. Not everything does, okay?

How exactly does Courir de Mardi Gras tie in with our story? Is the Yellow King a Mardi Gras King? Is it Will Ferrell? That remains to be seen. In the meantime, get acquainted with some lesser-known Cajun traditions. Happy early Fat Tuesday!