We already know True Detective writer-creator Nic Pizzolatto is a comics nerd. And for weeks, fans have speculated about comic-book influences on the show. But in the final scene of season one, did we get our first specific, near-verbatim tribute to one of Pizzolatto’s favorite comics scribes?

After describing his near-death experience, Rust tells Marty he’s been thinking about the stars and how they’ve reminded him that there’s an eternal battle going on between light and darkness. Marty’s pessimistic about light’s chances (we’ve bolded the lines to pay particular attention to for the comparison):

MARTY: I know we ain’t in Alaska, but it appears to me that the dark has a lot more territory.

After Rust convinces Marty to haul him out of the hospital, Rust presents a counterargument, offering the final dialogue of the season:

RUST: Y’know, you’re looking at it wrong, the sky thing.

RUST: Once, there was only dark. You ask me, the light’s winning.

Pretty moving, eh? Well, that sentiment was also moving when it appeared in Top 10 #8, a comic released in 2000. It was written by the legendary Alan Moore, whom Pizzolatto has cited as one of his earliest literary influences.

Top 10’s premise is way too confusing to get into at length here (given that it follows a bunch of superpowered cops who police a parallel dimension filled with satirical versions of various comics heroes and villains), and the scene in issue eight is also somewhat hard to follow. But basically, there’s a teleportation accident in which an average commuter finds himself fused with a gigantic space-traveling horse creature named Kapela. He’s a warrior who fights for the Great White (creation, existence, light) against the Great Black (destruction, nothingness, darkness).

As Kapela and the commuter lie dying under a starry sky, they have the following exchange:

KAPELA: No. Once there was only black. We are winning.

Here’s the final panel of that dialogue: 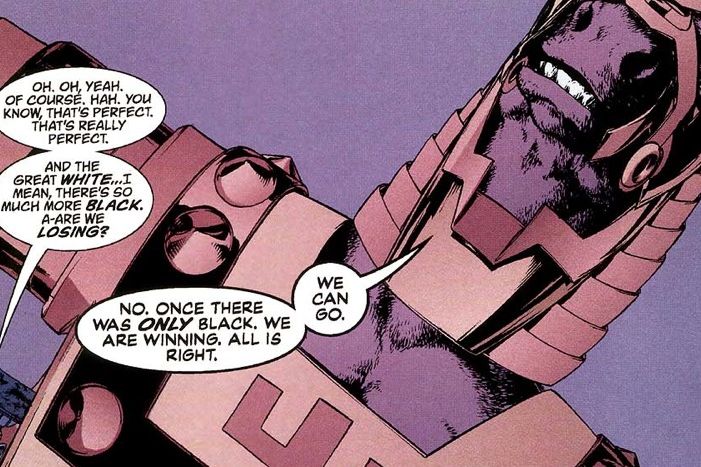 Certainly seems to be a similarity, right? Not a rip-off or plagiarism or anything, but it fits with True Detective’s larger tapestry of homages to works of literature and film. And Pizzolatto told HitFix’s Alan Sepinwall that Rust’s line about the light winning was, in fact, “one of the key pieces of dialogue that existed at the very beginning of the series’ conception.”

Tribute or not, here’s hoping this parallel might rekindle interest in Top 10, which is criminally underrated!