Last week, I spoke with True Detective production designer Alex DiGerlando about 13 props and set pieces from the series’ first seven episodes. This morning, I emailed with him about the finale’s giant stone maze, in which Rust, Marty, and Childress have their final faceoff. This is what he had to say about the location.

That was Fort Macomb, a pre–Civil War fort in New Orleans East. We had driven past it a few times while scouting for other locations and always thought it was cool and would be interesting for something. At one point, we were considering it for the backdrop of where Gerasi’s Maserati gets shot up. (We ended up shooting that right across the channel; in fact, Doumain’s sniper position was atop the fort.) 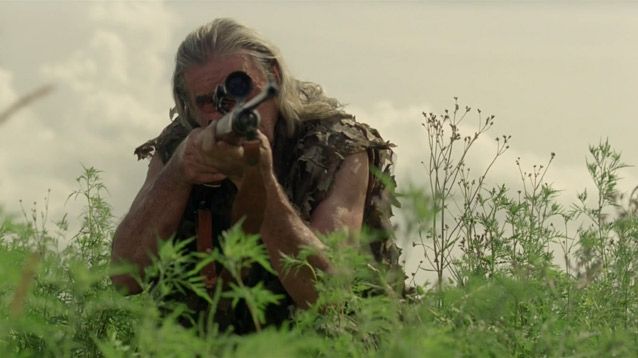 But when we were conceptualizing the final showdown, we ran into some logistical issues. The chase was originally scripted to take place in a cane field leading to an altar hidden within, but that was quickly scrapped when we realized the cane would barely be knee-high when we’d be filming it. An alternative concept was to set it in a cypress swamp, but that turned out not to really be realistic either since swamps have no hard ground and we’d have to be building all sorts of walkways simply to access the location, let alone stage it. This would have been really costly and time-consuming, in addition to raising safety and logistical concerns.

So we were starting to prepare ourselves for a compromise to shoot it in a brushy woodland location where the only really attractive quality was that it allowed for easy access. None of us were really excited about that, though.

Once we moved on from the cane field idea, we knew we would have to sculpt where ever we shot into a maze so that we could sustain tension throughout the chase. Nic had always had it written that there would be a certain amount of larger devil’s nests along the way, as well as torches that would lead to a stone altar. As we got into developing the look and motifs of the killer’s art, I became increasingly interested in building toward this moment and setting up all the previous incarnations of his sculpture as the wind-up before the big show. I thought it would be really interesting to experience this chase “inside” his art (and mind) rather than merely running past it. This concept appealed to Cary and Nic, but we couldn’t quite grasp exactly what it would look like until we settled on a location.

I think it was Cary who had the initial thought of putting the sequence in the fort, which by its very design is labyrinthine. Plus, it is currently in a state of decay, which fit our aesthetic well. And because it is a series of chambers, we were able to assign a specific action to each space.

For instance, I knew the inherent curved tunnel structure of the fort would become particularly disorienting if it were filled with blockades that you could still see through. Each chamber had an off-shoot tunnel that allowed for detours and eventual dead-ends. We mapped out the basic trajectory in the plan but kept the specifics loose. Once we settled on this as the basic idea, we supplied Josh Walsh and Sophie Kosofsky (our assistant art director, whom I’d worked with before on Beasts of the Southern Wild) with 3,000 pieces of driftwood scavenged by the greens department and let them and their small splinter crew have at it.

After they had it roughed in, we went through chamber by chamber to refine the path. It was really a lot of fun, but a scramble because we chose the location late in the game and didn’t have much time to pull it together. It also took a bit of thought to figure out how to make the fort seem like it existed in the same landscape as the Childress house. Fort Macomb is basically surrounded by a parking lot, so we had to build a mini-forest just outside the main entrance to ease that transition.

Finally, the altar chamber was built onstage to match the textures in the fort. The stone altar was sculpted from Styrofoam and treated with a hard shell polymer. We surrounded it with oyster shells because that is not uncommon in ancient burial mounds in southern Louisiana. The skeleton sculpture behind it (which we referred to as “the Yellow King” [!]) was another expansion by Josh Walsh on a rough description in the script. Nic specified a skeleton with multiple heads and arms. Josh saved all of his favorite animal bones and driftwood for that. I’d spent some time in India so I had the idea that he should use turmeric and other yellow spices to anoint the shrine. He had the great idea of masking out a spiral on the central skull. Very pleased with how that sculpture came out.

trailer mix 6:02 p.m.
Ted Bundy: American Bogeyman Trailer: Chad Michael Murray Can’t Make Murder Hot Please, for the love of all that is good, stop trying.
oops all josts 5:45 p.m.
Adult Man-Turtles Casey and Colin Jost to Adapt TMNT A scientist spilled goo onto a turtle in his lab and it formed another Jost brother, Casey.
baby news 4:26 p.m.
Tan France and Husband Welcome Their First Son Baby France is here!
renewals 3:58 p.m.
Mighty Ducks Fight On, Renewed for Season Two at Disney+ No quacks about it.
casting couch 3:46 p.m.
Margo Martindale, Kristofer Hivju to Helm Elizabeth Banks’s Cocaine Bear But who’s playing the cocaine bear?
casting call 3:28 p.m.
Aubrey Plaza Won’t Marry You, But She’ll Plan Your Wedding, With New Hulu Series Adapted from the novel Olga Dies Dreaming.
streamliner 2:57 p.m.
How to Download Shows and Movies on Your Favorite Streaming Services Your ultimate guide to the ins and outs of offline viewing.
rolling loud 2021 2:40 p.m.
DaBaby Brought Tory Lanez Onstage at Rolling Loud The rapper apologizes for homophobic remarks after being dropped from several festival appearances.
coming soon 2:30 p.m.
Amazon’s Big Expensive LOTR Series Will Finally Premiere September 2022 Filming has wrapped in New Zealand.
overnights 2:02 p.m.
90 Day Fiancé: Happily Ever After? Recap: There’s No Fun Fake Version Why is Jovi blowing kisses to strippers? Is he practicing kissing his marriage good-bye?
deals 1:53 p.m.
Travis Scott Gets Into Business With A24 Cactus Jack Films and A24 begin their partnership with Utopia.
the chungle is murder 1:47 p.m.
What the Hallöchen Are We to Make of Jesse Plemons’s Jungle Cruise Accent? “The chongle is murder.”
trailer mix 1:28 p.m.
Together Should Be Called The House That Was Full of Accents James McAvoy and Sharon Horgan in a pandemic rom-com? We’re all the way in.
the festival circuit 1:00 p.m.
DaBaby Pulled From Lollapalooza Lineup After Homophobic Comments Hours after being dropped from Governors Ball, DaBaby is also no longer playing Day N Vegas.
casting couch 12:46 p.m.
Chloe Fineman, Jeff Garlin to Get Serious for Damien Chazelle’s Babylon They join the stacked cast of his period piece about Hollywood’s Golden Age.
lollapalooza 12:37 p.m.
Limp Bizkit Brings Woodstock ’99 to Lollapalooza Introducing “Dad Vibes.”
renewals 11:55 a.m.
The Chi Will Answer All Your Finale Questions With a Fifth Season Lena Waithe cannot be stopped.
coachella 11:07 a.m.
Frank Ocean to Headline Coachella 2023 The festival’s co-founder Paul Tollett confirmed the news in an exclusive interview with the Los Angeles Times.
now streaming 11:00 a.m.
New on Paramount+: August 2021 Thelma & Louise, Heartbreakers, Star Trek: Lower Decks season 2, and more.
venom 10:20 a.m.
The Weeknd Quits Hard Drugs, Presumably Can Feel His Face Ladies and gentlemen, the Weeknd.
More Stories