Last Sunday morning, The English Patient was on TV. I had your typical cable movie reaction: I alerted co-workers on Twitter; I canceled plans; I forced everyone in my home to put down their phones and not speak during the good parts (anything in the desert, and especially the wind scene). A million years ago, Seinfeld made it fashionable to dislike The English Patient, but, being a female human who enjoys love stories, I’m still devoted to it, which means that I feel a particular affection for Ralph Fiennes. With the help of End of the Affair and The Constant Gardener, he came to represent a certain 2000s archetype for me: upper-crust, handsome, annoyingly (but effectively) silent, and bound to disappear at any moment. So maybe I should not have been surprised when he did — hiding behind Voldemort’s mashed-in nose for the better part of a decade. 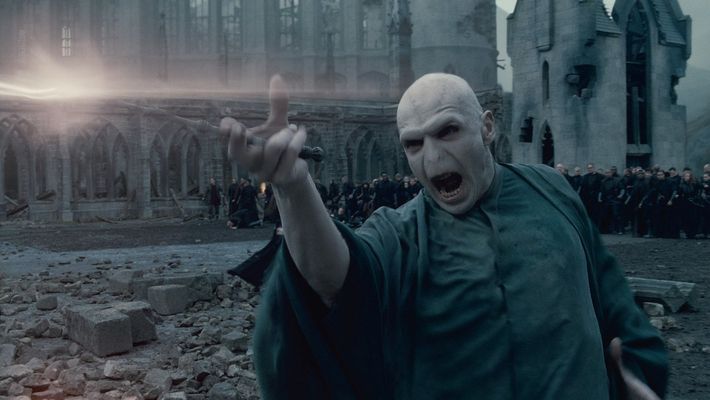 Fiennes has been around, obviously — 2008 was a weirdly busy year for him, with parts in The Hurt Locker, The Duchess, The Reader, and In Bruges — but Harry Potter dwarfed those movies, and it was hard to watch Fiennes without thinking of the cape and the weird face. (Unless you were watching The Reader, in which case you probably kept thinking about how often Ralph Fiennes seems to get mixed up with Nazis.) He directed and starred in a well-received but little-seen adaptation of Coriolanus, and then he took roles in other, uh, less-serious movies (Nanny McPhee, Clash of the Titans). His dapper, otherworldly charm faded. You almost forgot what he looked like in a tux.

So thank you and God Bless to Wes Anderson for putting Fiennes back in a morning coat (even if it’s a purple morning coat, and a sort of goofy one at that). The Grand Budapest Hotel is not exactly a traditional Fiennes film — it’s funny, for instance, and it asks him to be funny, too. (That is new!) But it uses his natural reserve, and it celebrates Fiennes’s nostalgic, posh appeal, even as the movie acknowledges the limits of such fantasy. (Bonus: It pits Fiennes against Willem Dafoe, an English Patient callback that I, for one, appreciated.)

Most important, The Grand Budapest Hotel puts him front and center again without asking him to personify evil. Fiennes told the New York Times that he was happy to “exorcise” Schindler’s List and Voldemort with Grand Budapest; I’d like to think it worked. At the very least, it gave us another taste of Ralph Fiennes in fancy clothes, seducing difficult women and making the past seem grander. Welcome back, sir!

+Comments Leave a Comment
Welcome Back, Ralph Fiennes! You Were Missed

spicy pisces 18 mins ago
Olivia Rodrigo Glows in Arcade Lights in ‘traitor’ Liv is in the clouds like a true Pisces
on set emergency 8:20 p.m.
One Killed, One Hospitalized on the Set of Alec Baldwin’s ‘Rust’ Production is being halted.
streamliner 5:30 p.m.
Roku and YouTube Are Fighting in Public Again After December 9, their deal’s done.
now streaming 5:30 p.m.
Checking In On Netflix’s Original Movies: October 2021 Edition A Jake Gyllenhaal thriller, a Peruvian psychodrama, and an animated spin-off of Bright.
lads 5:21 p.m.
Franz Ferdinand Drummer Says Take Me Out … of the Band “It was a bit of a shocker for us when we found out.”
renewals 5:15 p.m.
Anthony Hopkins Doesn’t Care That Mythic Quest Is Renewed for Seasons 3 and 4 We, on the other hand, are thrilled for “Mr. Quest” or whatever.
buffering 4:00 p.m.
Let’s Overanalyze Netflix’s New Viewing Metrics The streamer has a new ratings methodology. We dive in.
beyoncé?! 3:56 p.m.
Beyoncé Lobs Her New Song ‘Be Alive’ Into the King Richard Trailer Her 2022 Oscar campaign begins today.
good one podcast 3:51 p.m.
Ricky Velez Is a Real New York City Stand-up  The comedian joins this week’s Good One to discuss his new special.
stand-up 2:46 p.m.
Dave Chappelle the Comedy Relic After a decade of teaching Chappelle’s comedy to college students, a professor comes to terms with the fading relevance of the one-time GOAT.
By Danielle Fuentes Morgan
awards season 2:41 p.m.
The Gothams Announce Their Nominees, Gender-Neutral Acting Categories For the first time, the independent film and TV awards body has gender-neutral acting categories.
fandom 2:19 p.m.
Behold, Adele’s Framed Piece of Gum Chewed by Celine Dion “It’s pretty amazing.”
podcasts 1:35 p.m.
Why Michael Hobbes Won’t Tell You You’re Wrong Anymore The popular podcast host explains his departure from You’re Wrong About.
spoilers 1:33 p.m.
Let’s Talk About the Ending of Only Murders in the Building … and how it and the entire season consistently surprised us.
vulture festival 2021 1:30 p.m.
3rd Rock From the Sun and Cowboy Bebop Are Coming to Vulture Festival Dancing With the Stars, Bosch with Hollywood Handbook, Sarah Silverman, Seth Rogen, and much, much more just got added to our lineup!
blabbermouths 1:20 p.m.
Is Brian Cox Allowed to Be Saying All This? L-to-the-O-G off, Brian.
becoming bill 1:13 p.m.
How Impeachment Transformed Clive Owen Into Bill Clinton “I have a memory of Clive in his full Clinton prosthetics chasing me down a hallway of the West Wing set because he was so excited.”
trailer mix 1:06 p.m.
Tom Holland and Mark Wahlberg Are Hunting for Treasure and Trouble in Uncharted Just two adventure hunks chasing the bag.
now streaming 12:28 p.m.
A Spooky Guide to All the New Horror Streaming This October Horror fans with big streaming budgets are in for a treat this year.
art du jour 11:49 a.m.
David Byrne’s New Book Is (Nothing But) Dingbats Illustrated dingbats, that is.
More Stories