As far as Wes Anderson films go, The Grand Budapest Hotel is the Wessiest film that ever Wessed. It collects a who’s who of Anderson regulars — Bill Murray, Owen Wilson, Jason Schwartzman, Tilda Swinton, and many more of the director’s alumni make appearances — and carefully moves them around the titular location like impeccably costumed dolls in a toy house. The characters are blocked so exactingly, in fact, that you may realize that in virtually every shot, the actors move either in horizontal straight lines crossing in front of the camera or in vertical straight lines walking toward or away from it. Sound the alarm: Wes Anderson characters have lost the ability to walk in diagonal lines.

Anderson’s been trending in this direction for a while now, and it became especially pronounced with his last film, Moonrise Kingdom, where his characters snapped to rigid x and y lines on the regular. Check out these GIFs to see what we mean: 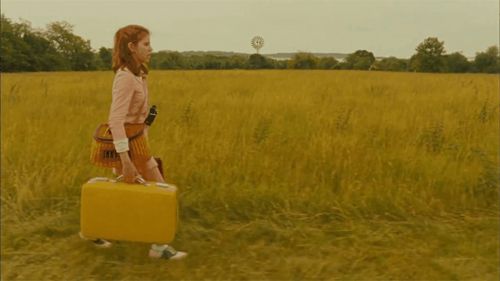 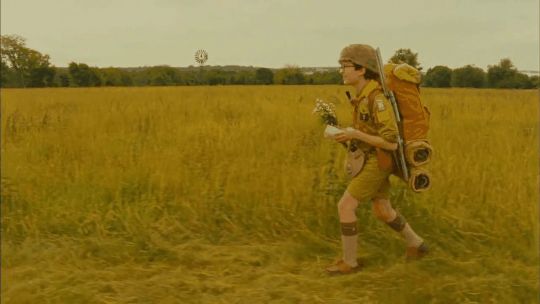 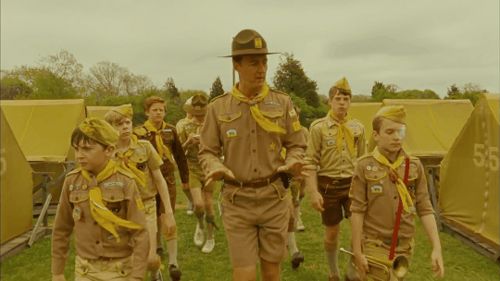 The right-angle habit reaches its apex in Grand Budapest Hotel, though, which begins with a scene where a young girl crosses through a wintry courtyard from right to left in one unbroken shot. (It’s surprising that no one has created an 8-bit video game parody of Wes Anderson movies yet, since his characters have about as much freedom of movement as the player in a side-scroller like Contra.) From then on, nearly every single footpath is shot in profile or head-on, so much so that it’s legitimately surprising later in the movie when a character must swerve in a wide arc to run around the circular front desk plopped down in the middle of the Grand Budapest lobby. Who knew they could even do that?

Of course, Anderson has always had a yen for fussy visual framing — it’s part of his charm. Rushmore was as particularly composed as one of Max Fischer’s plays, and the characters in The Royal Tenenbaums had so few costume changes that they might as well have been plastic dolls with painted-on garments. But in those movies, there was a terrific frisson between the naturalistic actors and their utterly unnatural surroundings, and that’s something that Anderson may have micro-managed out of existence with his increasingly fastidious blocking.

Take the scene below from The Royal Tenenbaums, where Richie (Luke Wilson) meets his adopted sister Margot (Gwyneth Paltrow) in their tent for a heart-to-heart. There’s an element of choreography to Wilson’s blocking at first, but it’s revealing and poignant: He climbs onto a gate and swings it toward a second-story window, a sneaking-into-the-house maneuver he must have perfected in his youth. Then, once he finds Paltrow in the tent, he ambles into the room — diagonally, we might add — and eventually joins her for a moment that may be the most emotional of any in Anderson’s oeuvre, where they confess their love to each other, hold each other tight, and whisper quietly about his suicide attempt in ways they almost can’t bear to come to grips with.

The scene is magical, with Paltrow moved to real tears in a setting that’s resolutely unreal in all of its candy-colored, immaculate fastidiousness. That’s the great contrast that those early Wes Anderson movies can get at  — the moment where an actor has the freedom to surprise us in a movie that seems designed to the nines — and that’s the sort of thing that’s gone missing in his newer work, where almost every choice an actor makes seems preprogrammed into them by a camera operator. If Anderson had shot Tenenbaums now, I wonder, would he stage it with Wilson and Paltrow exclusively staring at each other in profile, instead of allowing them to talk and react to each other naturally? Would that kernel of something real — this moment that Richie and Margot have stolen for each other where they escape from Anderson’s persistent fantasy world outside the tent — go missing?

For as locked down as Grand Budapest is, it does have Ralph Fiennes’s delightfully three-dimensional performance as the movie’s lead, but it’s almost like the other actors have been flattened to cast him into greater relief, somnambulantly pacing in and out of framelike cutouts in a diorama. Anderson’s always liked a deadpan performance, but there’s a difference between that and utter lack of affect, and his youngest actors (and problematically, his brown-skinned characters) now seem particularly two-dimensional, reciting lines so flat that they make Wednesday Addams look positively ebullient. These days, Anderson’s supporting characters have as little spark as they do freedom of movement.

Since Tenenbaums, Anderson’s projects have circumvented the globe, bouncing from the Mediterranean (The Life Aquatic) to Paris (Hotel Chevalier) to India (The Darjeeling Limited) and now Eastern Europe*. Anderson himself has become more worldly, but paradoxically, his movie world is flatter than ever. I’d never want Anderson to lose his distinctive visual style (especially when the box office is ruled by comedies with no visual panache whatsoever), but I wish he could loosen his grip just a bit. He’s an expert at building these marvelous, proudly artificial sets that look like dollhouses — can’t he let his actors play around in them a little bit?

* The locations of Anderson’s films have been updated.