For current blockbusters, the post-credits sequence is de rigueur, both a wink to hardcore fans and a way to further advance the story into potential sequels or spinoffs. For the past half-decade, these scenes have mostly been associated with superhero movies, so much so that current audiences know better than to leave the theater when a film like Captain America: The Winter Soldier — which has two post-credits scenes — fades to black.

Marvel Studios has helped bring post-credits teasers to the forefront of the modern moviegoing experience. These types of scenes, though — also referred to as the stinger, the credit cookie, and the egg — have been around for several decades. Figuring out exactly when and where they began depends on your definition of the original term. If you think the post-credits sequence is a continuation of a scene while the credits begin rolling (not the strict modern interpretation, of course), then you might say 1960’s Ocean’s 11, in which Frank Sinatra, Sammy Davis Jr., and the rest of the gang are seen walking down a boulevard in Las Vegas, represents its first incarnation.

Others point to the 1963 007 film From Russia With Love as the first. Still, that was really just a title card, teasing that “James Bond Will Return in the Next Ian Fleming Thriller Goldfinger,” a post-credits trend that would continue in future Bond flicks. 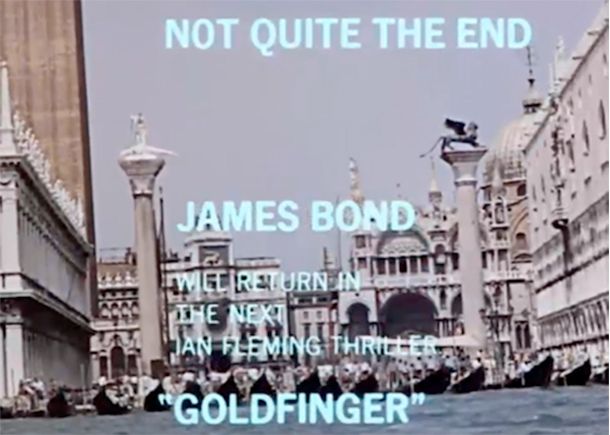 Though the 007 title cards are a far cry from today’s full-fledged scenes, they still share the same sentiment — the idea that there’s more to come down the road. More familiar is the scene from 1966’s spy spoof The Silencers, in which Dean Martin is shown lounging on a bed with a group of beautiful women before a tease for the film’s sequel, Murderer’s Row.

1979’s The Muppet Movie has consistently been credited with kicking off the post-credits craze of the 1980s. The movie not only incorporates a sequence while the credits are rolling, it has a scene at the end where everyone’s favorite psychopathic Muppet, Animal, turns to the camera and tells the audience “GO HOME!” (a gag Matthew Broderick used eight years later for Ferris Bueller’s Day Off).

Soon other films began to pick up on the trend. In 1980’s Airplane!, a man from the beginning of the film is seen sitting in Ted Striker’s cab, having racked up a $100-plus tab. “I will give him another 20 minutes,” he says, “but that’s it!” Many comedies use their post-credits scene this way, attempting to wrap up an inconsequential and likely forgotten plotline from earlier in the movie.

Eventually, horror flicks would add their own unique spin, in films like Sleepaway Camp and The Howling, the latter of which threw in an old movie reference, 1941’s The Wolf Man, just for kicks.

Still, most of these scenes were one-offs, meant as a wink to the audience instead of something that actually teased another film. But that changed with Young Sherlock Holmes in 1985, where the villain, Professor Rathe — who we were led to believe died at the end of the movie — is seen signing his name as Moriarty, foreshadowing his role as Sherlock’s future nemesis. Granted, there never was a Young Sherlock Holmes 2, making that post-credits moment nothing more than a fun Easter egg. It wasn’t the first time a stinger failed to deliver on a tease. In 1987’s Masters of the Universe, a robeless Skeletor rises up out of a moat, looks into the camera, and says “I’ll be back!” He was not.

The ‘90s brought in even more tongue-and-cheek post-credits moments, from films like Super Mario Bros., Mortal Kombat, and, Lethal Weapon 3. Family flicks also began trying stingers, in films including James and the Giant Peach, Babe: Pig in the City, and — once we hit the 2000s — both the Spy Kids and Shrek franchises. Even direct-to-video films like Scooby Doo on Zombie Island and Aladdin: Return of Jafar got into it.

By the 2000s, major franchise films started using stingers as a way to connect themselves to sequels. Though most people like to dump on Star Wars Episode One: The Phantom Menace, it should get recognition for at least attempting something clever with its post-credits sequence. Instead of actually showing a scene, it incorporated Darth Vader’s heavy breathing, foreshadowing young Anakin’s path to the Dark Side.

After Episode One, even indie movies were adding in a little something extra. Some came in the form of outtakes, like the Steve Buscemi fight in Terry Zwigoff’s Ghost World. Others used the extra space as a callback to earlier films in a series, like Kevin Smith did with this stinger at the end of Jay and Silent Bob Strike Back, where God (played by Alanis Morissette) shuts the book on the View Askewniverse. There were also movies that took a swing at something really offbeat, like the fake video game in Crank.

And finally we arrived at the post-credits scenes most audiences are now familiar with. In Iron Man, we saw Samuel L. Jackson as Nick Fury, introducing Tony Stark to something called “the Avengers Initiative,” thus launching the Marvel Cinematic Universe we all know and love today. (Interesting tidbit: Iron Man is normally credited as the first Marvel movie to go for the stinger, though it technically happened on an earlier film, Daredevil.)

After that, the superhero floodgates burst open, as Iron Man 2, and Thor joined the post-credits mix.* Marvel then switched up the format a bit in 2011 for the first Captain America, whose stinger featured a teaser for The Avengers — an idea similar to what the Wachowskis did in 2003, when they stamped a trailer for Matrix Revolutions after the credits for Matrix Reloaded.

Plenty of other tentpole flicks began to get post-credits love, too, including the Pirates of the Caribbean films, The Chronicles of Narnia: The Lion, the Witch, and the Wardrobe, Harry Potter and the Chamber of Secrets, and Fast Five and Six.

Today, post-credits scenes show up in both superhero and non-superhero movies (like Anchorman 2 and Now You See Me). The only difference now is that each frame is meticulously analyzed and studied after the fact. In fact, the post-credits practice has become so accepted that there are now two apps called MovieStinger and Anything After, which are dedicated to tracking these moments in new movies.

Despite its seemingly indefinite shelf life, it’s still tough to say for certain whether the current post-credits phenomenon will continue. It’s not too much of a stretch to see it disappear altogether. Then again, Marvel, by far the best at producing these moments, seems content with the current model. “I don’t want to be in that theater for the first time when even two people stay behind and nothing happens,” said Marvel president Kevin Feige during the 2012 promotional tour for The Avengers. “I like that we’ve trained at least some people to stay behind and get a little reward.”

Feige is being coy here. These scenes are more than just “a little reward”; they act as transitional moments for the entire franchise and help bring audiences in for future chapters. However, his overall sentiment, and its underlying context, is clear: As long as post-credits scenes are positive for the Marvel brand, they will keep using them — and so will other studios looking to capitalize on the same type of success.