This past Sunday’s Mad Men was unusual. Most episodes of the show cover a few days, at least; some cover several weeks in the characters’ lives. But “A Day’s Work” takes place almost all on one day: Valentine’s Day. And while we’ve seen a few Christmases over the years, this is only the second Valentine’s the show has explicitly addressed. The first was in season two’s premiere, “For Those Who Think Young.” And man, oh man, does that episode ever feel like a long time ago. Looking at “Work” and “Young” side by side, we can see what’s essential to the characters and what has and hasn’t changed.

Mad Men is, very broadly speaking, about mortality and the futile human fight to outrun the ever-nearer clutches of death. Same goes for these two episodes. In “Young,” set in 1962, Don gets a physical, and his doctor warns him about his high blood pressure (160/100 — pretty high), an admonition that haunts him so much he, for once, can’t perform sexually. Duck Phillips insists that Sterling Cooper hire some younger creatives, and Don balks: Young people don’t know anything, he says. Especially that they’re young. (Don’s 36 in this episode, not exactly ancient grandpa territory.) There’s an overarching worry that young people are taking over, and that older people will be forced out — out of the workforce, out of social relevance, out of the world itself.

By the time we get to “A Day’s Work,” it’s 1969, that youth panic has subsided, and in its place is a resignation; yes, we are all going to die, and yes, the younger people are here to replace us. Sally goes to her roommate’s mother’s funeral after callously telling her friends she’d do anything she could to “put Betty in the ground.” The generally anxious Pete used to worry about dying. Now he thinks he is dead: “I don’t know whether I’m in heaven, or hell, or in limbo,” he says. He just knows that “no one feels [his] existence.” Strange to think that, for Pete, heaven and hell could be so indistinguishable. Stranger still that he doesn’t mind his death. He minds his invisibility. 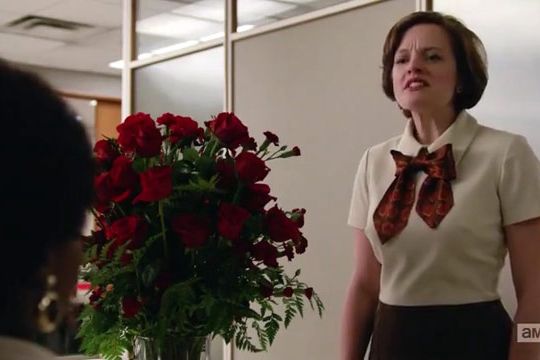 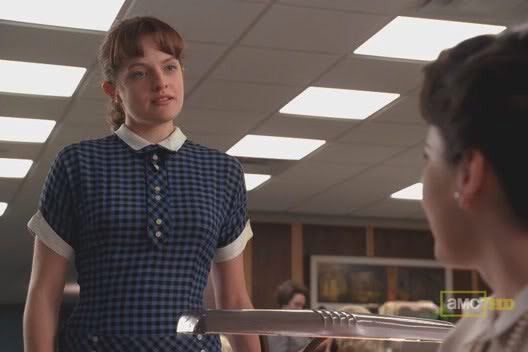 In “Work,” Peggy inappropriately flips out on her secretary Shirley, all over a misunderstanding about a bouquet of roses. She’s not mad at Shirley, really; she’s mad at Ted, and she’s mad at herself. We usually think of Peggy in contrast to the meaner bosses like Don or Roger, but this isn’t the first time Peggy has snapped at a secretary. She did it in “For Those Who Think Young,” too, scolding Lois for not being discreet enough about Don’s whereabouts. Again, she’s not actually mad at Lois — she’s mad at Don, for being so late to their meeting, and she’s mad at the conference room full of her male co-workers, who cruelly gossip about her and ask her to do menial tasks. She’s echoing a lesson Joan taught her in season one, about how secretaries are obligated to lie for their bosses, and it’s a lesson we know Dawn has learned as well. People lie for Don. A lot. Sometimes because he’s asked them to, but sometimes because they’ve convinced themselves that’s a way to get into his good graces.

Don and Sally’s relationship is one of the most candid and dynamic on the series, and in “Work,” we see a very poised, mature Sally instruct Don to “just tell the truth.” Later, she insists that he “stop talking.” He accuses her of being “just like her mother” — which here is meant as an insult, but back in season two’s “Young” was a compliment. There we saw a tiny Sally put on her mother’s riding boots — boots we know are covered in literal manure — and prance around the kitchen. Yes, Sally learned a lot from her mother, particularly how to convince yourself you’re comfortable in a world of horse shit. 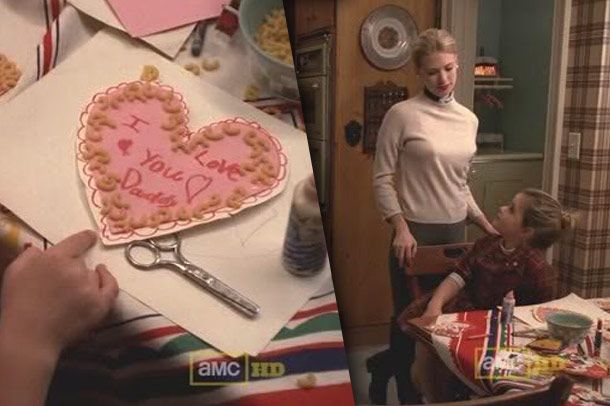 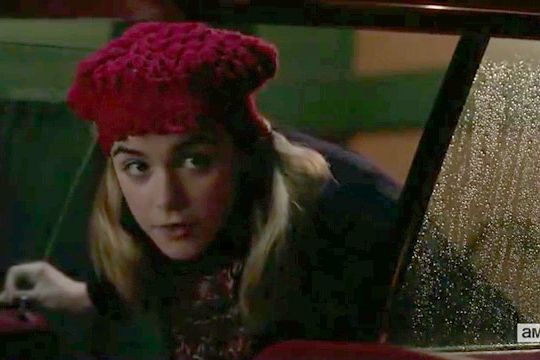 “I love you, Daddy,” Sally scrawled on a Valentine. (If Bobby made one, the show didn’t acknowledge it.) “Happy Valentine’s Day. I love you,” she says matter-of-factly seven years later. 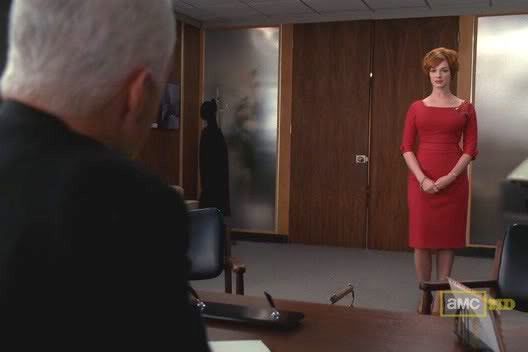 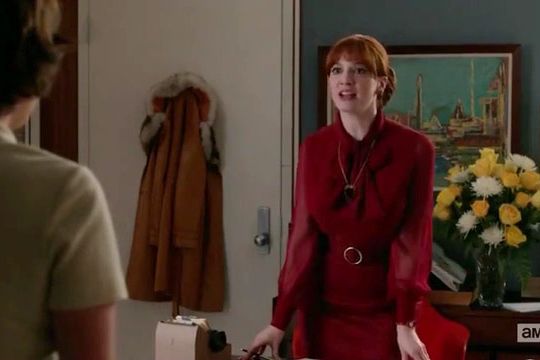 Joan’s a problem-solver. Joan is the person you go to when you want to whine. And Joan likes to wear red dresses on Valentine’s Day. In “Young,” she’s figuring out where to put the new (first) copy machine, all while Paul complains about sharing offices and Lois complains that Peggy doesn’t like her. In “Work,” Peggy and Lou are complaining that they want to switch secretaries, Bert’s being racist, and Joan’s trying to figure out where she fits in. We see Joan snap at people a lot, as she does in both these episodes, and sometimes we can chalk that up to Joan being, well, kind of snappish. But people are constantly making their problems Joan’s problems, so much so that people just walk through her office as a shortcut — all roads lead to Joan, whether she likes it or not. In “Work,” she moves upstairs to the accounts department, but it’s hard to imagine her removing herself completely from personnel issues. After all, she’s been at it for so damn long.

There’s another odd overlap between the two episodes. “Work” starts out with Sally and her two classmates bitching about their mothers, and her redheaded friend marvels, “How the fuck does my mother know what a prostitute looks like?” (That’s after saying she assumed “working girl” meant “something low-class, like a secretary.”) We learned in “Young” that Betty, in fact, did not know what a working girl looked like. On Valentine’s Day, she and Don ran into one of Betty’s old roommates from her modeling days; Betty feels bad that Juanita is still looking for Mr. Right until Don corrects her. “She’s a party girl, Bets,” he tells her. She’s stunned and embarrassed, and later, when she relays this information to her friend Francine, Betty lies and says she knew immediately that Juanita was a “call girl.” “Don agreed with me,” she brags.

As with many episodes of Mad Men, there’s a lot of lying in both “Young” and “Work.” And not just from our Lie King Don Draper, but from the people around him, too. He even tells Lois he’s going to see “Pinocchio,” if you want to pile lies on lies. Lying is practically part of Sterling Cooper — and SCDP, and Sterling Cooper & Partners — culture, and it’s one of the ways characters show people that they care about them and jockey for power: Whose lies do you know? Whom have you lied for? What have you helped cover up? But every so often, something has to cut through that thick cloud, and oftentimes, ironically, it’s the ad slogan various characters are working on. That’s true elsewhere, and it’s especially true in “For Those Who Think Young.” Don and Peggy, et al., are working on a campaign for Mohawk Airlines, and Don is presented with an illustration that goes with the tagline “Where are you going?”  Don looks at a drawing of a crowd and then draws a red box around a little girl in the background. (He draws that box with a china marker, just like the one he uses in “Work” to mark the line on his bottle of liquor.) He wants to build a campaign around sentiment, not sentimentality, he tells Peggy and Sal. The girl in the drawing looks like Sally, and we know now that Don is in the early stages of recognizing what kinds of things he’s going to pass down to his daughter. By season seven, Don’s horrified by what Sally has inherited, but in season two, there’s still hope. “What did you bring me, Daddy?” is the tagline Peggy comes up with in the Mohawk meeting. What did you bring me, Daddy? Yeah, Don. What did you bring her?

appreciations 23 seconds ago
Bob Saget, Remembered by Those Who Knew Him “Luckily, I got to tell Bob I loved him a lot while he was still here. But I’d sure love to be able to tell him again.”
By Stuart Miller
buzz buzz hmmm 23 mins ago
Our Spooky, Sexy Yellowjackets Theories Time to render some post-finale verdicts.
bad dad 3:14 p.m.
Breaking Down Britney Spears’s Accusations Against Her Father From millions of dollars in legal fees to her dad’s defunct cooking series, Cookin’ Cruzin’ & Chaos With James Spears.
casting 3:12 p.m.
Congrats to The White Lotus Season-Two Cast on Its Alleged Italian Vacation EDIT: Its alleged *SICILIAN* Vacation.
cheer 2:59 p.m.
TVCC’s Coaches Talk Cheer, Sportsmanship, and ‘Eff the Judges’ Vontae Johnson and Khris Franklin explain what you didn’t see when it comes to the Navarro rivalry, scoring, and the unsmiling “Weenies.”
sundance 2022 1:25 p.m.
18 Sundance Movies We Can’t Wait to Watch (from Home) From horror stories to news-breaking documentaries, here’s what’s we’re watching this year.
By
tv review 1:17 p.m.
On the High Seas or in Court, La Fortuna Excels in David-vs.-Goliath Mode If the Lincoln Lawyer author Michael Connelly were to secretly write fanfiction for the National Treasure universe, it might look like this.
my single is dropping 12:30 p.m.
Charlie Puth Finally Flips on New Song ‘Light Switch’ Watch his, uh, glow-up in the accompanying music video.
super bowl lvi 12:23 p.m.
What Is This Super Bowl Halftime-Show Trailer? Everything but a “‘G’ thang.”
a long talk 12:09 p.m.
‘It Was Always All Pedro’ David Bazan had to reckon with Pedro the Lion — but really, himself — to arrive at the band’s future.
By Craig Jenkins
good one podcast 11:41 a.m.
‘Our Better Episodes Are the Ones That We Fight Over’  Charlie Day and Glenn Howerton talk It’s Always Sunny and when they’ll know it’s time for the long-running show to end.
By Jesse David Fox
slashers 10:41 a.m.
Which Ghostface Is the Best Ghostface? In which we rank the Scream killers — including Scream (2022).
the industry 8:00 a.m.
The Future of Agenting Isn’t in Hollywood Jeremy Zimmer has been leading United Talent Agency for 30 years. He sees a complex road ahead for the 10-percenter business.
overnights 8:00 a.m.
And Just Like That … Recap: The Hobbes Rom-Com The Miranda stuff has been a mess from the beginning, and it looks like it’s about to get a lot messier.
advice 8:00 a.m.
How to Overcome Accent Anxiety in 4 Simple Steps Few things scare an actor more than mangling an accent — so say their dialect coaches. Here, the pros offer a few words of advice.
By Chris Lee
last night on late night 12:47 a.m.
Watch Jimmy Fallon Play Every Streaming-Service Soundmark You got your ta-dum in my bwaaah!
streamliner 12:24 a.m.
Winter Olympics: NBC to Stream ‘Every Minute of Every Live Event’ on Peacock Including the opening and closing ceremonies.
overnights Yesterday at 10:30 p.m.
The Real Housewives of Orange County Recap: Passport Control The Cabo trip is about to be ruined by Hurricane Noella.
only in new york Yesterday at 9:04 p.m.
Watch Bill Murray Give a Surprise Concert in Washington Square Park Featuring a rendition of “I Feel Pretty.”
obits Yesterday at 7:42 p.m.
Marty Roberts, of Legendary Lounge Act Marty & Elayne, Has Died The married duo played L.A. club the Dresden six nights a week for more than 40 years.
More Stories