Back in October, after seeing Gravity, America’s leading science guy Neil deGrasse Tyson took to Twitter to point out a whole bunch of scientific inaccuracies in the film. Though he said he ultimately liked the film, it was too late — shots were fired. Well, last night, at the Time 100 Gala, Tyson found himself talking with Gravity director and co-writer Alfonso Cuarón, and at first glance, it appears things were a little tense:

But they quickly settled down, and you can see the two laughing and posing together, along with other space friends: former astronaut and current Under Secretary of Commerce for Oceans and Atmosphere Kathryn Sullivan and Harvard astronomer John Kovac. Like Sandra Bullock taking her steps on the wet sand, Cuarón and Tyson have taken their first wet steps to being best space friends forever. 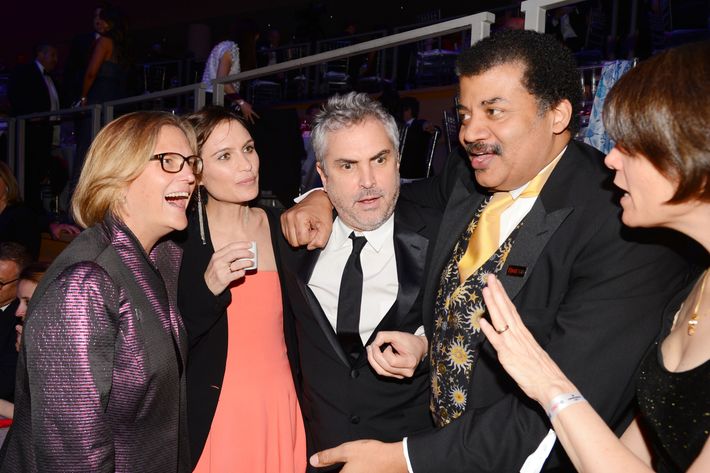 set updates 7:02 p.m.
‘The Rookie’ Commits to Only Using Airsoft Guns, Banning “Live” Guns on Set The decision is in response to the tragedy that happened on Rust
pharbz rise up 5:17 p.m.
Phoebe Bridgers and Matty Healy Surprise Fans With the Duet of Tumblr’s Dreams *Cries in jean jacket and Doc Martens*
memorial 2:01 p.m.
Husband of Halyna Hutchins, Rust Cinematographer, Speaks on Tragedy American Film Institute has created a scholarship in honor of Hutchins.
tired (swifties' version) 12:52 p.m.
Taylor Swift Leaves More Clues for TiRED Swifties How can we connect this news to the next four Fridays?
remembrances 7:00 a.m.
The Naomi Shelton We Knew An evening remembering the late Gospel Queen, village voice, and forever friend.
By Saki Knafo
obits 2:31 a.m.
Peter Scolari, Girls and Bosom Buddies Star, Has Died The actor was 66.
explainers Yesterday at 11:00 p.m.
Everything We Do and Don’t Know About the Fatal Rust Set Shooting The camera crew had reportedly walked off the set to protest work conditions earlier that day.
he's back Yesterday at 9:46 p.m.
Hayden Christensen Is Reprising His Role As Anakin Skywalker In the live-action Star Wars series Ahsoka, starring Rosario Dawson.
life in plastic Yesterday at 7:34 p.m.
Ryan Gosling Will Play the Ken to Margot Robbie’s Barbie In the Greta Gerwig movie about the Mattel doll.
obituary Yesterday at 6:32 p.m.
Remembering the ‘Tireless’ Halyna Hutchins, a Rising Cinematography Star Friends and colleagues recall the cinematographer’s work ethic and artistic eye: “There is no excuse I can accept for this loss.”
By Chris Lee
overnights Yesterday at 6:27 p.m.
Canada’s Drag Race Recap: Cirque du So Gay Send in the clowns.
follow friday Yesterday at 6:09 p.m.
Grace Freud Is One of Only 10 Gay People Left on Earth We caught up with the comedian on Instagram Live.
lowkey reminder Yesterday at 5:27 p.m.
Are the Characters of Insecure Okay?! Going Into Season 5? A brief rundown of who’s killing it and who’s on the verge of a breakdown as the HBO series heads into its final season.
overnights Yesterday at 4:27 p.m.
I Know What You Did Last Summer Recap: You Got Nothing to Hide Everyone finally recognizes Clara for the obvious murder suspect she is.
tv review Yesterday at 4:17 p.m.
Insecure Remains Magical and Messy in Its Final Season The series draws to a close with a characteristically effervescent yet uneven exploration of the dynamics of 30-something life.
now streaming Yesterday at 4:00 p.m.
What’s Leaving Netflix: November 2021 Glee, School of Rock, Waterworld, and more.
dunes Yesterday at 4:00 p.m.
How to Watch Dune, the Year’s Sandiest Movie The sci-fi epic hit HBO Max a day early.
dyune Yesterday at 3:59 p.m.
A Brief Ode to Sand, a Powerful Cinematic Supervillain Forget the lusty sea, it’s time to recognize sand, and then run away from her, screaming.
crime Yesterday at 3:56 p.m.
Robert Durst Charged With the Murder of His Wife After 39 Years Days after being convicted of killing a friend for what she knew.
stand-up Yesterday at 3:23 p.m.
The Stand-up Set Cycle, From Notebook to TV Special Ricky Velez, Ronny Chieng, and Gary Gulman on how they develop new hours after leaving the old ones behind.
More Stories