You haven’t fully appreciated a superpowered adventure until you’ve seen a crowd of heroes and villains perform a beachside adaptation of Grease’s “Summer Nights.” This Sunday, viewers nationwide can experience that and more, via Adult Swim’s Robot Chicken DC Comics Special II: Villains in Paradise, a bizarre and irreverent romp through the world of DC’s superheroes and baddies, featuring guest voice performances from Zac Efron as Superboy, Giovanni Ribisi as the Joker, and, perhaps most entrancing of them all, the venerable Alfred Molina as Lex Luthor. Vulture talked to Robot Chicken creators Seth Green and Matthew Senreich, as well as DC chief creative officer Geoff Johns, about Batman voices, Beppo the Super-Monkey, and Superboy’s awful fashion sense. Plus, we have an exclusive clip from the show! Roll clip!

Let’s talk about “Sexx Luthor,” Lex Luthor’s hair-metal band, and their catchy little tune about picking up hot chicks.
Seth Green: It was just one of those things where it grew. Once we had the lyrics, we wrote the song, then we had Alfred’s performance of it. The animator made the dance incredible. We wanted it, we weren’t sure it would actually work, but it exceeded all of my fantasies.

Wait, that’s actually Alfred Molina singing “Oh baby baby, with that ass so sweet” and so on? You didn’t bring in a ringer for the song?
Matthew Senreich: Oh yeah.
Green: Oh, yeah, man — he fucking crushes it!

Was he your favorite bit of celebrity casting for the special? It’s a competitive field, what with Nathan Fillion doing Green Lantern, and all the rest.
Green: One of the best investments we made was Alfred Molina. That was such a pie-in-the-sky ask, and nobody thought he’d do it, because he’s such an amazingly accomplished actor. And then he just crushed as Lex Luthor! It’s awesome!
Geoff Johns: In the second special, Luthor’s such a massive part of it, and he dances and yells.
Senreich: Another pie-in-the-sky was to get Paul Reubens to do the Riddler. It’s unfortunate, because a lot of the Riddler stuff got cut for time.
Green: The other thing we did was, in the first special, I played Gorilla Grodd for, like, one or two lines. But in the second special, it started shaping up that Grodd would be kind of a critical character with an arc, so we went out to Clancy Brown, because Clancy’s so awesome. We wanted Grodd to be sort of funny, but have gravity, and go through the emotional journey that Grodd goes through.
Johns: [Laughs.]
Senreich: I think the weirdest thing was getting Zac Efron to play Superboy. We had him for our Star Wars special and he’s just this down-to-earth, fun guy. He comes and wants to play with us. He’s totally game; you can throw a curveball at him. And he can sing! So Superboy, it just elevated the whole thing for us.
Johns: I think Zac might be my favorite interpretation of that character of all time. Just that whole attitude.

Can I just say: Thank you for picking the early-’90s version of Superboy, with his legendarily awful costume.
Johns: Oh yeah, that thigh belt is classic.

Don’t forget the leather jacket.
Green: And the sunglasses, too! It’s like, take your fucking sunnies off, dude! He’s just like, “Nope, not gonna.” 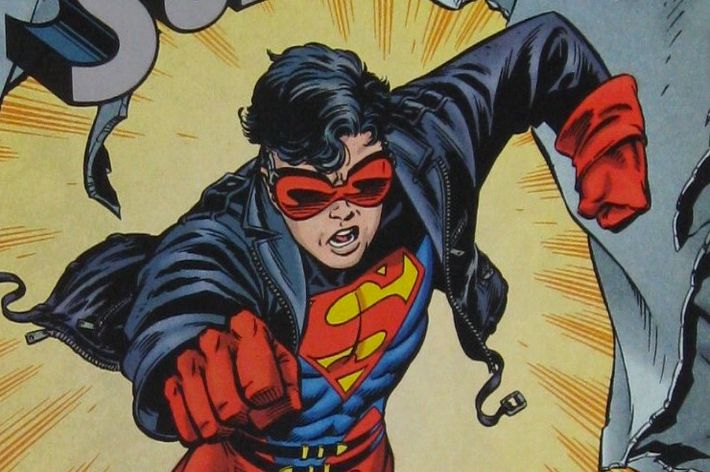 What DC villains didn’t make the cut for the special?
Johns: Mister Mind, who’s a super-intelligent worm from outer space. He did not make the cut, unfortunately.
Senreich: We really tried to get a Red Lantern thing in. We had, like, eight Red Lantern sketches. One of them almost got in at the last minute, but it was a little too racy.
Green: It was a game-time cut. The thing about Robot Chicken is, eventually it becomes about how much time you have for the total thing. You wind up having to shave seconds in several places, so lots of stuff gets cut. Oh, and he’s not a villain, but Beppo the Super-Monkey, we had to cut.

There’s a long scene where Green Lantern is flying Batman around in a green bubble and this really ridiculous easy-listening folk song plays. What was the origin of that?
Green: It’s like a Jim Croce thing. Just a lot of feelings. Christopher Cross. It’s meant to be —
Senreich: That actually came from one of the writers in our writers’ room, a guy named Hugh Davidson.
Green: If you’re familiar with Robot Chicken, he wrote that sketch in our Star Wars special where the Wampa is trying to get gas after his one arm has been removed by Luke Skywalker.
Senreich: He’s kind of a writer from the non-geek world, trying to understand geek things.
Green: He always applies really basic human emotion and relatable circumstances to these grand characters.
Senreich: So like, he had his guitar there —
Green: No, but like, it started with the fact that Batman doesn’t have superpowers! Every time he’s with the other members of the Justice League, he gets carried by somebody or piggybacked by somebody. And he’s gotta just be, like, over it.
Senreich: Again, Hugh had that song in his head, and the rest is history.
Green: We thought we were gonna cut it, because it’s really long. We had a hard time in the overall episode with leaving in a three-minute, slow-paced emotional journey.
Senreich: But it was worth it!

Seth, how do you prepare your Batman voice?
Green: Ahhhh, I guess I … don’t? Sometimes I’ll listen to other Batman bits I’ve done that people liked. There’s no, like, root thing.
Senreich: That was Seth just pitching in the room while doing that voice. It started in the early seasons of Robot Chicken, and we all just loved that voice.
Green: It was because of Christian Bale! I loved that super-gritted-up, borderline-stuffed-nose thing. But yeah, Batman is not something I prepare for.

gimme more 1:19 a.m.
J-Hope Rocks Out With ‘MORE’ His first single from his upcoming album, Jack in the Box.
plot guy 12:40 a.m.
Tim Allen Doesn’t Understand Hot Buzz Lightyear “It just doesn’t seem to have any connection to the toy.”
my mv isnt dropping 12:19 a.m.
Cardi B Glows in Gold in Her ‘Hot Sh-t’ Lyric Video Featuring Kanye West and Lil Durk.
overnights Yesterday at 11:30 p.m.
The Old Man Recap: Partners in Crime Zoe and Angela shift from quiet supporting participants to emboldened main players.
dog watch Yesterday at 11:30 p.m.
Keeping an Eye on The Old Man’s Dogs If anything happens to Dave and Carol the Rottweilers, so help us …
overnights Yesterday at 10:00 p.m.
Southern Charm Recap: Marcie’s Playground It’s getting increasingly difficult to understand who exactly is in this cast.
his way Yesterday at 8:33 p.m.
Usher Confesses Once More on NPR’s Tiny Desk Concert Ushering into July with some sweet songs.
overnights Yesterday at 8:20 p.m.
The Real Housewives Ultimate Girls Trip: Ex-Wives Club Recap: All Tea, All Shade How do you solve a problem like Dorinda?
ouch Yesterday at 6:25 p.m.
Lena Headey Is Being Sued for a Cut Thor: Love and Thunder Role Her now-former agency alleges that she owes $500,000 for it.
coming soon Yesterday at 6:08 p.m.
Strangers, Andrew Scott’s New Movie With Paul Mescal, Sounds Hot Mescal’s character will “puncture the rhythm” of Scott’s “everyday life.”
let's go grandmas Yesterday at 5:10 p.m.
Miles Teller Should Be the Next James Bond, Says Miles Teller’s Grandma “Miles is very proud of his genetic connection to the British Isles.”
timelines Yesterday at 4:47 p.m.
The Complete History of Ezra Miller’s Controversial Career The woman Miller appeared to choke in a 2020 video from Iceland recounts the incident.
good one podcast Yesterday at 4:19 p.m.
Cristela Alonzo Needed a Decade to Process Greg Giraldo’s Advice  “You don’t have to listen to everybody’s notes, but if you respect them … maybe listen and see if it works with what you’re doing.”
no rest for the tickets Yesterday at 4:00 p.m.
New York Is Finally Making Ticket Prices More Transparent A bill that bans hidden fees and requires resellers to show original prices has been signed into law.
the classics got no respect today Yesterday at 3:35 p.m.
Glenn Frey Would Not Approve of This Nonsense A brawl broke out among VIP guests at an Eagles concert, during “Take It Easy.”
in a material world Yesterday at 3:20 p.m.
An Immaculate Collection of Details About Madonna’s Self-Written Biopic Starring Julia Garner as Madame X herself.
the industry Yesterday at 3:02 p.m.
Randall Emmett, Producer and Vanderpump Rules Ex, Faces Abuse, Fraud Allegations The king of the “geezer teasers” allegedly mistreated business partners, employees, and women (including ex-fiancé Lala Kent).
bpe Yesterday at 2:29 p.m.
The Songs of Girls5eva, Ranked They’re gonna be famous 5eva, but which song is No. 1?
knock knock Yesterday at 2:00 p.m.
31 Comedians Share Their Favorite Joke-Joke From puns to chickens crossing the road to giving Willie Nelson a blowjob.
By Jesse David Fox and Jason P. Frank
rip Yesterday at 1:44 p.m.
Sonny Barger, Hells Angel Turned Sons of Anarchy Guest Star, Dead at 83 He died of cancer according to a Facebook post.
More Stories