With all these TV shows about witches (last season’s American Horror Story: Coven, Lifetime’s Witches of East End, True Blood, Supernatural), is it possible that WGN’s Salem might be the scariest of the bunch? Basically, all you need to know before watching the second episode this Sunday (aside from what channel WGN occupies on your cable) is that there’s a witch in town and everyone’s trying to find him and/or her. But we know it’s a her, and she and her clan of magical women are doing their best to mess with Salem and its slew of paranoid citizens. In the creepiest ways they can. For example:

Here is how witches give and/or get an abortion.
You rub weird stuff on the face and pregnant belly, awful visions arrive, a bunch of cockroaches appear, and poof! You’re not pregnant anymore.

This poor, poor frog.
The witch is keeping (incubating?) a frog in her enemy’s gut and takes it out every once in a while …

… to suck her witches’ mark? Is that what that is?

A possessed girl has to identify the witch who cursed her …
So they put her on a leash and have her scary-walk around the town before biting off her own finger (eek) and pointing at “the witch.” (It’s not the witch, but that doesn’t really matter.)

Shane West’s wig.
It’s like Shane West went and borrowed the Antonio Banderas wig from the set of Saturday Night Live’s “The How Do You Say? Ah Yes, Show.” Beard’s a good look, but could we have done without the horror of this hairpiece? 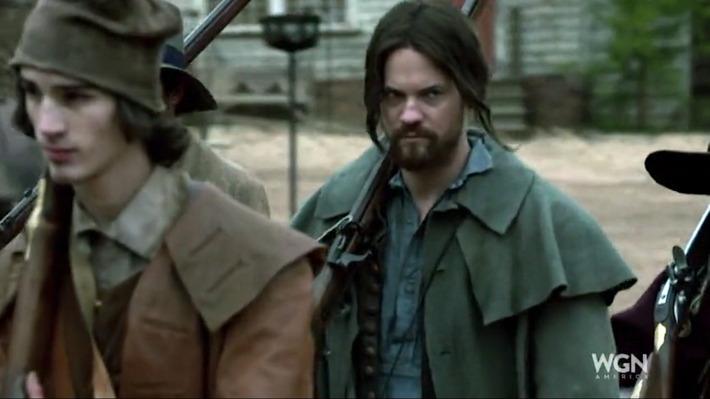 +Comments Leave a Comment
Salem: A Witch Show That Is Actually Quite Scary

the law 4:26 p.m.
Tekashi 6ix9ine to Be Released From Prison Early Amid Coronavirus This is somehow not a belated April Fools’ joke.
coronavirus 4:21 p.m.
All the Live Events, Movie Releases, and Productions Affected by the Coronavirus A long list of broken dreams.
4:00 p.m.
Don’t Watch These Movies If Quarantine Is Driving You Crazy  Claustrophobic movies for a claustrophobic good time.
vulture guides 4:00 p.m.
A Handy Guide to Everything That Will Be on Quibi When It Launches Surely there’s something you’ll like?
coronavirus 4:00 p.m.
All the Celebrities Who Have Tested Positive for the Coronavirus Idris Elba, Kristofer Hivju, and more.
docuseries 3:52 p.m.
Tiger King Is a Train Wreck — Nothing More, Nothing Less Netflix’s latest must-see series is an extreme, flawed example of a WTF docuseries that generates lots of conversation but little clarity.
3:22 p.m.
Ruth Langmore’s Most Iconic Lines on Ozark  Warning: Her vocabulary primarily consists of expletives.
socially distanced tv 3:10 p.m.
How Frasier and Niles Would Shelter in Place During the Coronavirus Frasier’s executive producer imagines the Crane brothers hosting a cappuccino-heavy Skype session.
socially distanced tv 3:10 p.m.
The Coach Taylor Speech I’d Write For Friday Night Lights’ Coronavirus Episode “Tell your families that Tami and I are thinking of them. Tell them you’re all in our prayers.”
socially distanced tv 3:10 p.m.
If I Wrote a Coronavirus Episode Tina Fey, Mike Schur, and 35 more TV writers on what their characters would do in a pandemic.
By Maria Elena Fernandez
socially distanced tv 3:10 p.m.
In 30 Rock’s Coronavirus Episode, Liz Lemon Wouldn’t Flee to GE’s Secret Island Tina Fey and writer Sam Means on how Liz, Tracy, Jack, Jenna, and TGS would handle the pandemic.
coronavirus 3:10 p.m.
In Law & Order: SVU’s Coronavirus Episode, Everybody Would Be Stuck Inside The dedicated detectives of the Special Victims Unit are home, pursuant to a self-isolate order. This is their Zoom session.
socially distanced tv 3:10 p.m.
In Veep’s Coronavirus Episode, Selina Meyer Would Be … Competent? An excerpt from the biography Size 2: The Year(s) of Selina Meyer, as imagined by showrunner David Mandel.
reality tv 3:08 p.m.
The Cuomos Are Roasting Each Other in Official Government Press Briefings Now The squabbles have invaded official state business.
theater 2:14 p.m.
Livestreaming and Labor: A Clash of Good Intentions at Red Bull Theater A dispute with Actors’ Equity shuts down a virtual production.
now streaming 2:00 p.m.
The 100 Best Movies on Netflix Right Now Groundhog Day, Taxi Driver, The Matrix, and more.
coronavirus 1:20 p.m.
Here Are All the Movies Delayed Because of Coronavirus With updated release dates where available.
too much tuna 1:17 p.m.
Break Out the C’caine, an Oh, Hello Podcast Is Coming Charmed, I’m sure.
trailer mix 1:07 p.m.
Peninsula Trailer: The Train to Busan Sequel Returns to the Zombie Wasteland Four years after the catastrophic outbreak, let’s just say the zombies are ready for dinner.
quarantine diary 1:00 p.m.
Darren Criss Is Learning Japanese and Playing With LEGOs in Quarantine He was supposed to be doing David Mamet’s American Buffalo on Broadway. Here’s how he’s keeping himself occupied instead.
More Stories