Did the planet just backflip off its axis? Are pigs doing cartwheels across the sky? Did Michael Jackson moonwalk out of his grave and buy a ticket to Shrek 5? Because something impossible just happened: Supernatural based a whole episode around female characters. Three-dimensional ones, even! None of them love interests. And with a recurring character to boot. What show was this? I know, I know, by now all complaints about Supernatural’s casual misogyny — whether by omitting multi-dimensional females or simply fridging them — are admittedly tired by now. But “Alex Annie Alexis Ann” proved that perhaps the complainers were right all along. This was a heavy, thoughtful, and tremendously well-written episode of television, and it couldn’t have been possible without strong female characters. Who knew! Oh, right. We all did. 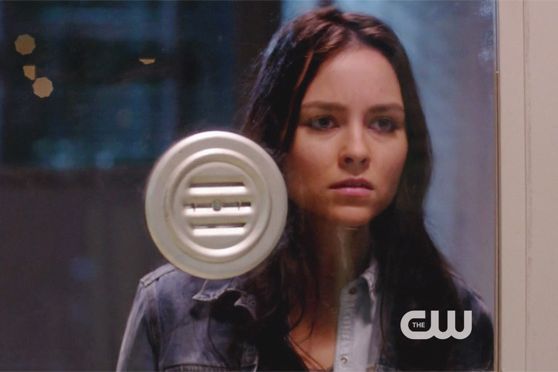 The cold-open began simply enough: A wily teenage girl was dragged into a Sheriff’s station and thrown into a holding cell. But all her protestations suddenly gave way to fear when she realized she was trapped and vulnerable to whomever was after her. And sure enough, soon a vampire was busting into her cell and threatening to drag her back to wherever she’d escaped from. It had been a while since we’d seen a vampire episode of Supernatural, but frankly, in comparison to certain other CW dramas, this episode served as a reminder of just how unimpressive the Supernatural vampires are. They’re not particularly strong or fast or otherworldly; they’re basically just murderers with bad teeth and weird diets. Which is why it was particularly satisfying when this happened:

Oh, that’s, right: Sheriff Jody Mills was back! At this point, she’s the longest-lived human female character on the show, and every time she appears, it’s a reminder of the deep feelings we form for familiar faces. Duh, that’s the one of the points of serials — remembered emotion as storytelling shorthand — but it’s astonishing that Supernatural still hasn’t done a great job of building out its cast of characters. But that’s neither here nor there; what is both here AND there is the fact that Jody saved this girl from a vampire, yet the girl still refused to divulge where the vampire nest from which she’d escaped was located. Baffled by her obstinacy, the Winchesters quickly realized what was up: The girl hadn’t simply escaped from a vampire nest, she’d escaped from her actual family. Apparently she was the sole human in a family of vampires, and years of helping them hunt other humans for food had pushed her to her breaking point. But then again, they were family, so it wasn’t like she was eager to see them all get murdered by a couple of hunter hunks. (Hunkers?) It was this family loyalty versus morality conflict that was the core of the episode, and it dovetailed nicely with Jody’s backstory, which, if you’ll recall, entailed her decision to MURDER her own child when he became a zombie and ate her husband. 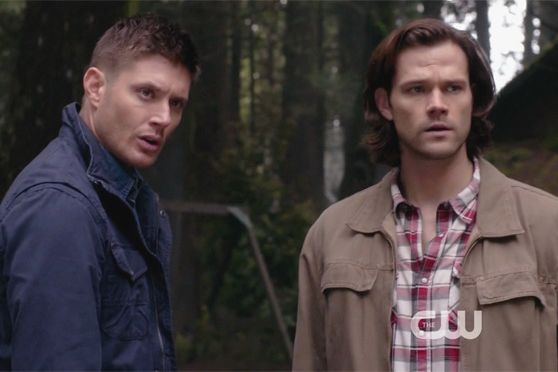 The episode’s plotting wasn’t overly elaborate or twisty, and most of its emotional heft derived from Jody’s tentative bonding with Alex at Jody’s secluded cabin while they hid from Alex’s family. Their combativeness and mutual distrust quickly gave way to an understanding, particularly when Alex prodded Jody about her dead family only to then curl up asleep in Jody’s son’s bed. Later, when the Winchesters decided that Alex had been too complicit in her family’s crimes to go unkilled, Jody protected her from them, and it made perfect sense. In Alex she recognized herself, a woman broken by circumstance but still with the wherewithal to carry on. Of course, it helped sway Alex away from her family when she remembered that she’d been kidnapped away from her real family as a child, but still. Some bonds are just too hard to sever. 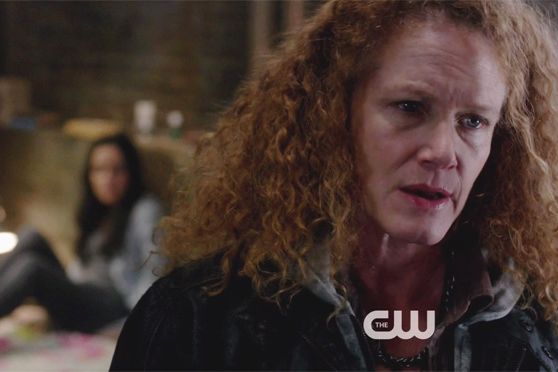 Fans of the CW’s late, often-great The Secret Circle may have recognized Ashley Crow as Alex’s frightening mother. In addition to the episode’s exceptionally well-written script, the supporting cast here was similarly next-level, and that goes especially so for Katherine Ramdeen as Alex. This is not a knock against the series’ usual supporting players, but something about this episode betrayed a heightened attention to quality and seriousness I wasn’t accustomed to. After nine seasons of near-constant allusions to other movies or TV series, it’s very telling that “Alex Annie Alexis Ann” riffed on the tasteful, obscure indie thriller Martha Marcy May Marlene. That movie was about a woman’s escape from a cult and then her subsequent all-consuming paranoia that they may still be after her. Aside from its title and broad setup (and the coincidental appearance of MMMM star Elizabeth Olsen during the commercial breaks’ Godzilla ads), this episode strayed from that film’s particulars while honoring the quiet desperation of each of its heroines. MMMM ended on an ambiguous note, while “AAAA” showed us Alex’s bold decision to betray her own mother in order to save Jody’s life (a bracingly clever visual callback had Alex turning away from her mother’s beheading, just as she used to turn away whenever her brothers would murder humans in front of her). Yet the episode still ended with a bedside chat between Jody and a recovering-from-vampirism Alex, in which it wasn’t clear what would happen to either of them after this, and it was an unusually nuanced choice for a show that often avoids nuance at all costs. 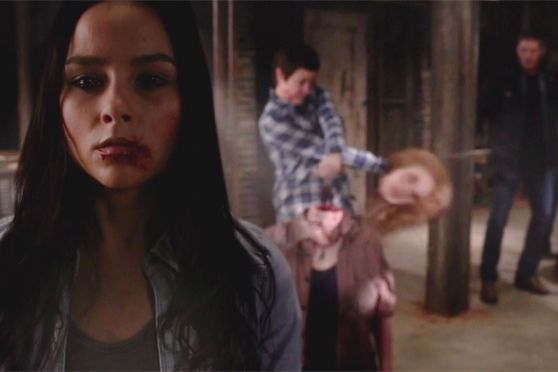 Aside from a brief bit where Sam objected to Dean taking a little too much pleasure in decapitating a vampire, there was not much forward momentum or growth for our ostensible heroes. It didn’t really matter; this wasn’t their episode. “Alex Annie Alexis Ann” was instead a gift to those who’d wondered what Supernatural might be like on the other end of the gender spectrum and a humble acknowledgment that it possibly could have been making episodes like this all along. It may not have been hilarious or meta or shocking and it didn’t feature Castiel in his underwear doing laundry, but “Alex Annie Alexis Ann” still ranks as a high point not only this season, but in the series’ entire run. It was almost enough to make me forget how lame these vampires are, just kidding, not possible. But yeah: Well done. 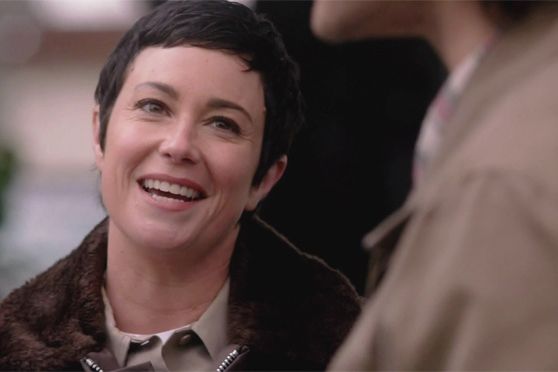 in conversation 8:00 a.m.
Dave Grohl Has Seen Too Much He’s the most prolific rock star of the last 30 years. Somehow, we’re still getting to know him.
By Craig Jenkins
bloodlust 3:51 a.m.
Vampires, Ranked (by Hotness) I learned a few things on this journey, mainly that most vampires are excruciatingly hot in a way that makes me feel bad and compromises my morals.
By Carrie Wittmer
the vampire chronicles 3:21 a.m.
An Oral History of Queen of the Damned How an Anne Rice novel became a Hollywood saga involving Aaliyah and the guy from Korn.
By Matthew Jacobs
podcasts 3:21 a.m.
Stephen Colbert Wants His Late-Night Podcast to Be ‘TikTok for Your Ears’ Naturally, his first guest was fellow podcaster Bruce Springsteen.
dc universe 12:16 a.m.
We Could Not Believe Our Eyes, Brendan Fraser Might Play Firefly In the Batgirl movie starring Leslie Grace.
overnights Yesterday at 10:30 p.m.
Below Deck Season-Premiere Recap: Can I Speak to the Manager? Below Deck is back with so much mismanagement!
controversy Yesterday at 10:08 p.m.
Dave Chappelle ‘More Than Willing’ to Talk to Trans Community About His Special But says he is “not bending to anybody’s demands.”
bachelor nation Yesterday at 7:27 p.m.
Katie Thurston and Blake Moynes Go Instagram Official With Their Breakup The Bachelorette couple said that they “are not compatible as life partners.”
overnights Yesterday at 6:20 p.m.
Y: The Last Man Recap: Letting the Grass Grow In the glow of the apocalypse, false rules burn. Now our players must figure out how to survive without them.
some good news Yesterday at 5:53 p.m.
Shea Serrano Is Going to Tweet This Story About Primo Getting A Series Order “Do you remember when the Spurs won the 2014 title after having their hearts broken in the 2013 Finals? That’s what I feel like right now.”
chat room Yesterday at 5:26 p.m.
Succession’s Natalie Gold Knows ‘You Can Never Really Get Out’ of the Roy Family “Rava can’t help herself with Kendall. She draws firm boundaries and then he always surprises her and she’ll let him in.”
annexed bachelor nation Yesterday at 4:57 p.m.
Disgraced Former Bachelor Host Engaged to Current Bachelor Reporter Corporate synergy!
vulture asks Yesterday at 4:03 p.m.
What’s Your Favorite Vampire Movie? There’s something about a faint chill in the air that makes us want to curl up under a blanket and watch fanged baddies go for the throat.
By Vulture Editors
housewives institute bulletin Yesterday at 2:37 p.m.
Halloween Can’t Kill Kyle Richards It may be Kyle’s big moment, but even she can’t steal Erika’s RHOBH reunion spotlight.
summer of scam Yesterday at 2:16 p.m.
Julia Garner Scams Us Into Believing She’s Anna Delvey She really delved into the role.
close reads Yesterday at 1:24 p.m.
Chucky Turns a Tired Horror Cliché on Its Head As the first Child’s Play installment with a gay lead, the new TV series is reclaiming a harmful trope that’s dogged the slasher genre for decades.
records on records Yesterday at 1:22 p.m.
Adele Takes an Easy Ride to No. 1 With ‘Easy on Me’ After breaking Spotify’s 24-hour global streaming record.
overnights Yesterday at 1:18 p.m.
90 Day Fiancé: The Other Way Recap: Couples Therapy Isn’t For Everyone Why did we waste so much time on Corey and Evelin this week when every other couple is blowing up?
secret life of a former wife guy Yesterday at 12:36 p.m.
Are John Mulaney and Olivia Munn Still Together, Or … ? According to Us Weekly, their relationship is facing “uncertainty.”
the law Yesterday at 12:04 p.m.
Gun in Fatal Rust Shooting Was Thought to Be ‘Cold’ A new affidavit provides a timeline for the shooting that killed cinematographer Halyna Hutchins.
More Stories