Filmmakers have been trying to crack heaven’s code for decades. Do you include pearly gates? Angels with golden halos? Just lots of people dressed in white? In the case of Heaven Is for Real, a new movie based on the best-selling novel of the same name, heaven is described as the stereotypical, above-the-clouds place where the Holy Spirit doles out help for those on Earth and God lounges around all day in a giant chair.

Though star Greg Kinnear has said that the movie is not just for religious folks, it is still being marketed at faith-based viewers as a story that challenges our thoughts on death and what exists after we shuffle off. Of course, not every movie that depicts heaven is intended to spark a conversation about religion. Here is a (non-comprehensive) look at how some movies tried to illustrate the afterlife.

All Dogs Go to Heaven (1989)
In addition to being one of those “kids” movies that turn out to be way more disturbing when you rewatch it as an adult, All Dogs Go to Heaven also takes a more childlike, colorful approach to heaven. Dog angels float through the clouds and the sky is filled with moon- and diamond- patterned roads. Though this location is first described as the Great Hall of Judgment, you do get to see what heaven looks like from a distance —a place where animals take naps all day and the temperature is kept at a consistent 73 degrees.

This Is the End (2013)
Though some may consider an afterlife filled with live boy band music akin to the red hot flames of hell, Seth Rogen and his crew in This Is the End are not among them. Especially if it’s the Backstreet Boys, who pop up in heaven at the end of the film after the Rapture has taken place. I assume God just couldn’t look past O-Town’s sins.

Defending Your Life (1991)
After Daniel (Albert Brooks) dies in a head-on collision, he ascends to Judgement City, a Los Angeles–like location where a group of judges get to decide whether he moves on to heaven. Unfortunately, Daniel isn’t worthy — at least not until he shows the ability to overcome fear, an afterlife prerequisite and something he neglected to do during his time on Earth. Luckily, Meryl Streep’s Julia is here to save the day, as Daniel eventually risks electrocution to be with her. If that’s not love, I don’t know what is.

Gladiator (2000)
We rarely hear the word heaven uttered in this Ridley Scott–directed epic. Instead, it’s referred to as “the afterlife,” a place filled with fields of grass, winding paths, and rolling hills (this afterlife also appears to only be set in monochrome blue, a rather drab look for paradise). Since Gladiator takes place in Ancient Rome, the location is likely a nod to the Elysian Fields, a vast green space where the righteous and pure are sent after they die. 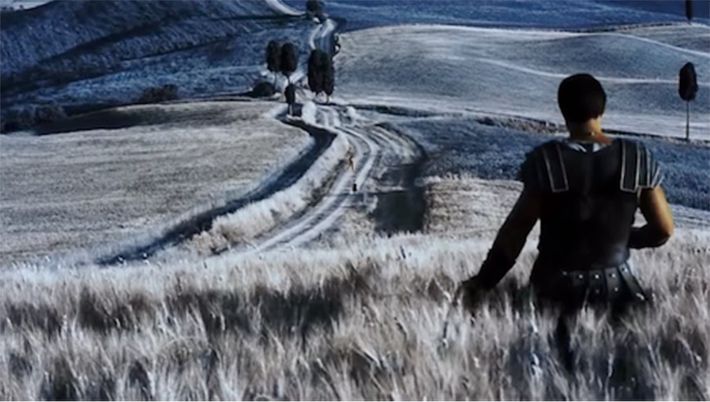 What Dreams May Come True (1998)
Look past the cheesy death-is-what-you-make-of-it dialogue from this Robin Williams–starring drama, and you’ll get a unique interpretation of heaven. After dying in a car crash, Williams’s character ends up in what appears to be an abstract painting, where he’s unable to hold anything without it turning into a colorful mush. However, once he is able to come to terms with death, his heaven transforms into a mountainous range filled with flowers, trees, and sunshine.

Ghost (1990)
We technically never see the inside of heaven in this 1990 romantic drama, but we do see it from the outside, as a Northern Lights–esque glow off in the distance. Then again, that’s just from Demi Moore’s perspective. Perhaps what Patrick Swayze is looking at is completely different. Whatever the point of view, Swayze’s hair is perfect. 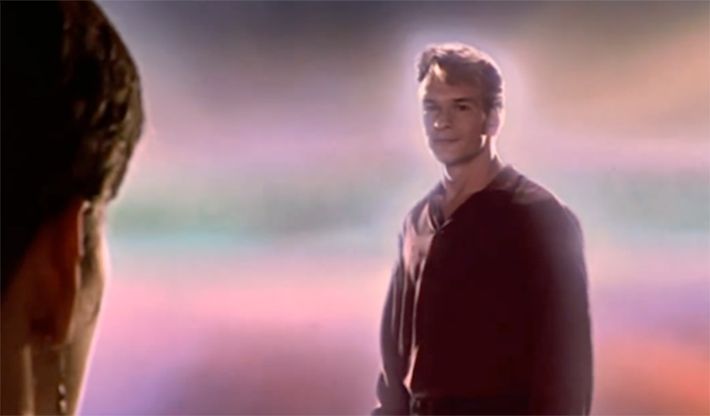 Monty Python’s The Meaning of Life (1983)
Monty Python’s take on heaven is a Las Vegas–style lounge where every single day is Christmas and women angels walk around topless with Santa hats on — which isn’t that far off from how some would describe Las Vegas in real life.

A Matter of Life and Death (1946)
This 1946 classic directed by British directors Michael Powell and Emeric Pressburger (The Life and Death of Colonel Blimp, Black Narcissus, The Red Shoes) was called Stairway to Heaven in the U.S., a nod to several scenes depicting a giant escalator to the afterlife. Since Peter, a British Air Force pilot, cheated death, he is forced to argue his right to live in front of a judgment panel. Cleverly, the scenes in heaven were filmed in black-and-white while the scenes on Earth were shot in lush Technicolor.

Ice Age: The Meltdown (2006)
For Ice Age’s Scrat, the idea of heaven is the ability to get whatever you want, whenever you want. Therefore, during his near-death experience, he ends up in a place filled with an unlimited supply of acorns. Unfortunately for him, this vision only lasts so long, as the squirrel gets brought back to life thanks to Sid’s quick thinking.

South Park Bigger Longer Uncut (1999)
Back in 1999, South Park was still killing off Kenny on a regular basis. So you knew Matt Stone and Trey Parker would have something special up their sleeves for the show’s big-screen incarnation. Lo and behold, Kenny ends up dying in the film after attempting to set his fart on fire. His version of heaven turns out to be filled with naked ladies, along with a brand-new pair of angel wings attached to his back.

Don’t Tempt Me (2001)
This unique Spanish flick starring Penélope Cruz, Demian Bichir, and Gael García Bernal, takes a more abstract view of heaven, setting it in the middle of Paris. (The lesson here: If you’re not a Francophile, make sure to die with a few sins.) Though we never deal directly with God in Agustin Diaz Yanes’s film, we do end get to see angels, like Victoria, a sultry lounge singer.

Down to Earth (2001)
Chris Rock gets hit by a truck and goes to heaven in this 2001 comedy, where he meets two angels, played by Chazz Palminteri and Eugene Levy. The few things that Down to Earth ends up telling us about the afterlife are that (a) it looks like a gigantic ballroom, (b) if you die before your time you can go back to Earth and live in someone else’s body, and (c) angels have terrible taste in tuxedos. 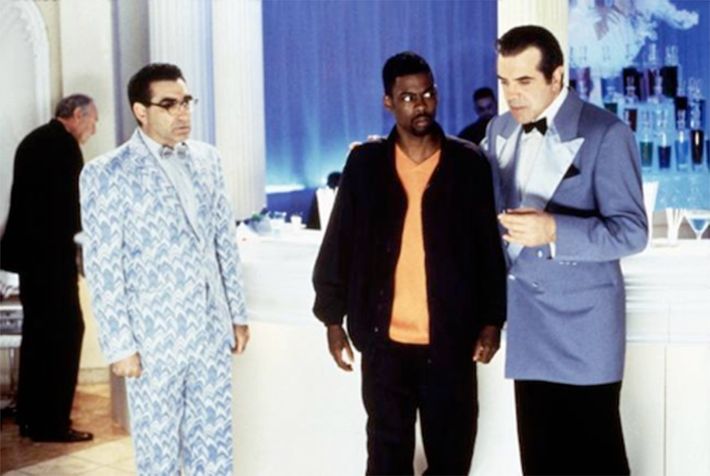 health updates 9:34 a.m.
Celine Dion Shares Rare Diagnosis, Postpones Tour The 54-year-old is living with stiff-person syndrome, which affects around one in a million people.
overnights 9:03 a.m.
Gossip Girl Recap: Exhibition at the Guggenheim Don’t spoon-feed us lessons on friendship. It’s Gossip Girl, so let’s focus on the gossip!
best of 2022 9:00 a.m.
The Best Video Games of 2022 In a year devoid of many major blockbusters, eccentric titles had their time to shine.
cancellations? 1:38 a.m.
Wait, Did Gal Gadot Jinx Wonder Woman 3? A day after she said that she was excited to share Wonder Woman’s “next chapter,” the movie is reportedly no longer moving forward.
trust me Yesterday at 11:51 p.m.
Black Adam Didn’t Do That Bad, Says Black Adam Star the Rock He said he confirmed with financiers that the movie will actually make a profit.
freaky friday Yesterday at 10:08 p.m.
Just Imagine the ‘All Too Well’ Short Film (Guillermo’s Version) Taylor Swift would like to swap places with Guillermo del Toro for a day.
overnights Yesterday at 9:07 p.m.
The Real Housewives of Salt Lake City Recap: Charcuterie Overboard People in glass houses shouldn’t throw shoes.
autopsy Yesterday at 8:13 p.m.
Anne Heche Wasn’t Drunk or High During Car Crash, Coroner Says Her official cause of death has been determined to be inhalation and thermal injuries.
let's go party Yesterday at 5:52 p.m.
Greta Gerwig’s Barbie World Keeps Getting Bigger Ken we talk about Ryan Gosling for a sec?
boston voice: wicked! Yesterday at 5:49 p.m.
Thank Goodness, the Wicked Movies Are on the Way What is this feeling? Oh, yeah, excitement.
alien superstar Yesterday at 4:52 p.m.
Avatar 2 Will Show Us the Way of the Weeknd His song for The Way of Water soundtrack drops December 15.
news from shondaland Yesterday at 3:29 p.m.
Grey’s Anatomy Scammer Elisabeth Finch Wants to Write on Handmaid’s Tale Next After admitting she “never had any form of cancer.”
buzz! buzz! Yesterday at 3:04 p.m.
It’s Almost Yellowjackets Season Citizen detectives, there’ll be a break in the case on March 24.
1.5x speed Yesterday at 2:17 p.m.
Bad Men, Weird L.A., and 8 More Podcasts Worth Checking Out Welcome to the Night Vale team’s latest world.
dolls kill Yesterday at 2:09 p.m.
Robot Renesmee Hits Some Choreo in M3gan Bolstered by her viral success, M3gan is coming for your necks, your wigs, and an innocent old woman.
gma3 goss: what you need to know Yesterday at 2:08 p.m.
Every Detail of T.J. Holmes and Amy Robach’s GMA3 Drama in Chronological Order There has been an embarrassment (and we do mean that word) of detail.
sundance 2023 Yesterday at 1:01 p.m.
Cat Person Has a Date at Sundance Film Festival 2023 As part of the lineup for the in-person and online programs.
real boys Yesterday at 1:00 p.m.
Pinocchios, Ranked What is it about this little wooden boy that’s resonated for 150 years?
my single is dropping Yesterday at 12:23 p.m.
Did You Know That There’s a Lana Del Rey Album Coming Next March? Did you know that there’s a tunnel under Ocean Blvd features Bleachers, Father John Misty, and her pastor.
vulture 10x10 Yesterday at 12:08 p.m.
The Memory Puzzle 9-Across, Nine Letters: Clarice Starling and Gracie Hart.
More Stories