Gareth Edwards, the director of the blockbuster reboot Godzilla, has been taken to task by some critics for holding back on revealing the title character. Many of those same critics have also name-checked one of the fathers of the modern blockbuster, Steven Spielberg’s Jaws, which derives some of its effectiveness from the fact that it delays fully showing us its Great White until three-quarters of its running time has passed. That approach was a matter of necessity — the film’s mechanical shark constantly malfunctioned and also looked fairly crappy onscreen. Edwards’s similar approach seems more a deliberate jab at today’s summer films, in which we see spectacle early and often. But that’s not the only thing Godzilla borrows from Spielberg’s work … (Spoilers follow.)

1. The Spielberg Face
As Matt Patches writes about here (and as you can see in the video by Kevin B. Lee below), one of the most distinctive recurring visual tropes in a Spielberg movie is a static shot or slow camera dolly in on the awestruck face of someone looking offscreen at something amazing. In Godzilla, many of the characters pull the same face — in fact, Ken Watanabe’s scientist spends 75 percent of his screen time looking haggard and giving much Spielberg Face. 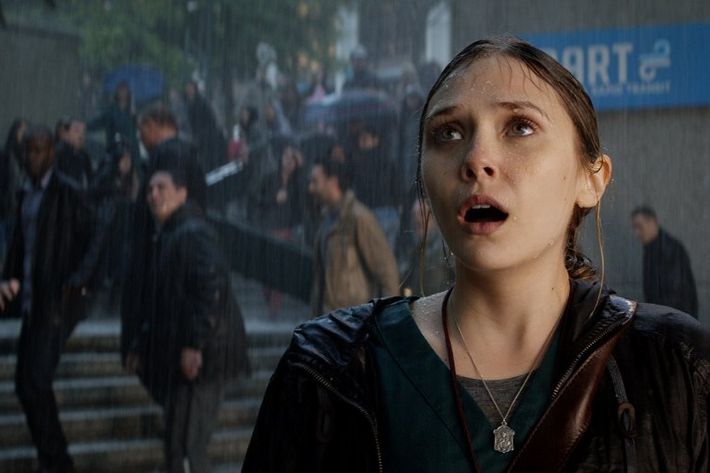 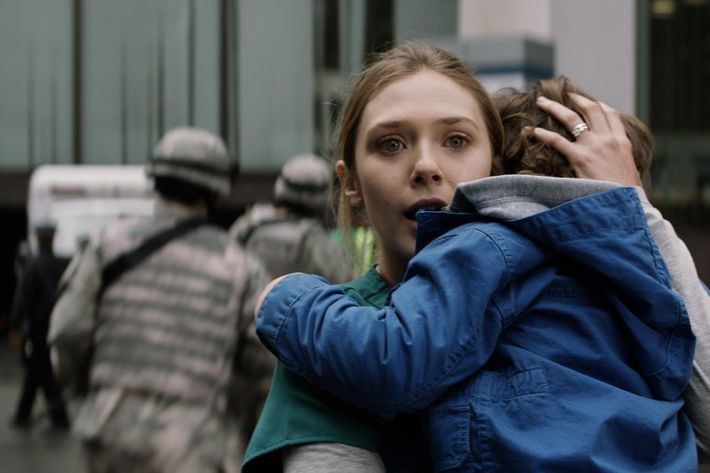 2. The T. rex escape from Jurassic Park
After being kept on lockdown, the winged M.U.T.O. escapes into the night because the arrogance of man is thinking that nature is in his control, etc., etc. The sequence is more than a little reminiscent of the one in Jurassic Park in which the giant T. rex escapes its paddock, right down to the loud tensile twanging of once electrified, now useless, steel wires.

3. The train and river debris from War of the Worlds
The moment when Aaron Taylor-Johnson’s Ford Brody (let’s not even talk about that Jaws-inspired name) is forced to run away from a train engulfed in flames is very reminiscent of the moment in Spielberg’s War of the Worlds when Tom Cruise and his kids stand by the side of a train track as a flaming locomotive barrels past. Also WoTW–ish is the scene, a few minutes earlier, when two soldiers stand on a riverbed and quietly watch as debris (though not bodies, as in the scene below) floats by.

4. Foggy windows
A mess of school buses sit on the Golden Gate Bridge as Godzilla approaches. The camera floats by the driver’s-side window of one school bus as the driver wipes the breath-fogged glass to get a better look — just like here:

5. Don’t make a sound
Brody and a fellow soldier lay down on a railroad trestle bridge as one of the M.U.T.O.s stalks by underneath, taking a moment to press its “eye” up between two slats. The fellow soldier’s radio starts to squawk. See: the Jurassic Park moment when Tim and Lex try to sit quietly in their car while the T. rex moves by, pressing his eye up against the window; the Jurassic Park moment when Tim and Lex try to quietly escape the kitchen as the raptors hunt; the War of the Worlds moment in the basement of Tim Robbins’s survivalist character’s house, when the tripod eye slithers in search of survivors. In each of those three moments, sound — the slamming of the jeep door, the dropping of a ladle, the scurrying of a child’s leg — alerts the creature that something is nearby.

vulture movie club 3:37 a.m.
Twilight’s Final Vampire Battle Is Better Than Anything Marvel Has Ever Done Slay, TCU (Twilight Cinematic Universe)!
By Rebecca Alter and Wolfgang Ruth
profile 3:13 a.m.
Matt Berry Has a Type The actor is known for playing ridiculous characters with a straight face — the stupider the better.
By Kathryn VanArendonk
chat room 3:13 a.m.
WWDITS’ Harvey Guillén Is Thrilled to See Guillermo Coming Into His Own “People want him to take action, and I can say he definitely will start doing that. But what are the repercussions of that?”
last night on late night 1:01 a.m.
Let Leslie Grossman Play Erika Jayne on American Crime Story To Sarah Paulson’s Tom Girardi.
theater review Yesterday at 11:09 p.m.
Fairycakes Never Takes Flight A play employing every theatrical sprite is pinned down by its leaden meter.
ed near-an Yesterday at 10:53 p.m.
SNL: Patton Oswalt and The Mountain Goats Suggest Replacements for Ed Sheeran “No Children” is viral on TikTok. Think about it, Lorne!
overnights Yesterday at 10:40 p.m.
Insecure Season-Premiere Recap: Back To Where We Started Insecure’s final season kicks off with a tension-filled college reunion. No better place to confront one’s fears, right?
overnights Yesterday at 10:02 p.m.
Succession Recap: Relevant Donuts The Roy children consider taking “a pop at the champ.”
overnights Yesterday at 10:00 p.m.
The Real Housewives of Salt Lake City Recap: You’re Not My Mom Believe it or not, Jennie’s not into the sister-wife thing.
overnights Yesterday at 9:06 p.m.
The Real Housewives of Potomac Recap: Crabs in A Barrel Must be the season of the rebrand.
obits Yesterday at 6:31 p.m.
Friends Star James Michael Tyler Has Died The actor, who played Gunther, was 59.
familia Yesterday at 4:55 p.m.
Vin Diesel Walked Paul Walker’s Daughter Down the Aisle Nothing stronger than family.
memorial Yesterday at 3:32 p.m.
Husband of Halyna Hutchins, Rust Cinematographer, Speaks on Tragedy American Film Institute has created a scholarship in honor of Hutchins.
overnights Yesterday at 1:39 p.m.
Saturday Night Live Recap: Jason Sudeikis Makes a Sharp Return Jason Sudeikis is a sketch-comedy Swiss Army knife in his SNL-hosting debut.
snl Yesterday at 1:00 p.m.
Kieran Culkin to Host SNL on November 6 Musical guest Ed Sheeran has tested positive for COVID-19.
snl Yesterday at 2:55 a.m.
Jason Sudeikis’s Vance Revives SNL’s ‘What Up With That?’ Along with Kenan Thompson and Fred Armisen.
set updates Oct. 23, 2021
The Rookie Commits to Only Using Airsoft Guns, Banning ‘Live’ Guns on Set The decision is in response to the tragedy that happened on Rust.
pharbz rise up Oct. 23, 2021
Phoebe Bridgers and Matty Healy Surprise Fans With the Duet of Tumblr’s Dreams *Cries in jean jacket and Doc Martens*
tired (swifties' version) Oct. 23, 2021
Taylor Swift Leaves More Clues for TiRED Swifties How can we connect this news to the next four Fridays?
remembrances Oct. 23, 2021
The Naomi Shelton We Knew An evening remembering the late Gospel Queen, village voice, and forever friend.
By Saki Knafo
More Stories