The X-Men franchise is one of Hollywood’s biggest, but even though Fox has had now seven chances to get things right, these movies have never, ever been marketed all that well. Go back and rewatch the trailer for the first X-Men, which borrows the aesthetic of an aggro, late-’90s Mountain Dew commercial, or recall the utterly awful teaser posters for X-Men: First Class, which advertised a terrific series reboot with one-sheets that looked cobbled together on MS Paint. The marketing campaign for the franchise’s new film, X-Men: Days of Future Past, occasionally hit some unexpected highs … but when they screwed things up, Fox unlocked a mutant cringe-power in all of us. Let’s relive all the notable highlights (and lowlights).

Things get off to a good start at Comic-Con 2013, where Days of Future Past has an even bigger presence than The Wolverine, due to come out the following week (and based on its eventually underwhelming domestic grosses, The Wolverine probably could have used some of that marketing muscle for itself). Outside the Convention Center, “employees” of Days of Future Past villain Bolivar Trask guard the film’s giant, mutant-seeking Sentinels, while inside Hall H, the entire Days of Future Past cast comes out onstage, a marketing masterstroke that galvanizes the tired Comic-Con audience. People go apeshit as each actor is announced, and an impressively cut teaser trailer, shown twice, only stokes the audience’s fervor. When the day is done, pundits are already declaring the panel to be the Con’s best. 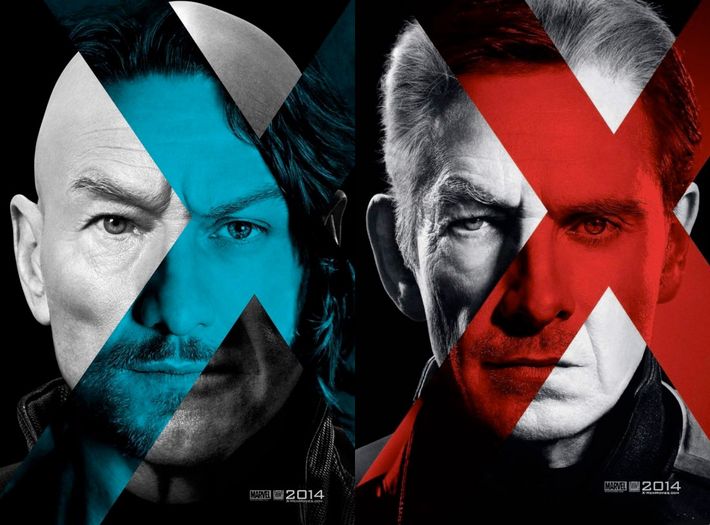 A week later, Fox releases the film’s first teaser posters, which splice Patrick Stewart and Ian McKellen with the actors who play their younger selves (James McAvoy and Michael Fassbender, respectively). They’re not bad. Director Bryan Singer also films an end-credits scene for The Wolverine that’s meant to lead into Days of Future Past, though it effectively undercuts The Wolverine’s own endpoint. And as if that weren’t enough, the studio also launches a viral-video campaign meant to shed light on Trask and his villainous plans. Days of Future Past is still nearly a year away at this point.

Five days before the official teaser-trailer for Days of Future Past is released, Fox rather obnoxiously posts a teaser for the teaser, formatted as a second-long Instagram video. This trend can die in a fire. (We’ll even let Pyro start it.) Fortunately, the official trailer makes up for that stutter step; it’s virtually the same thing that was shown at Comic-Con, but it looks elegant and promising.

After budget overruns and continued reshoots, there’s a bit of bad press as the Calgary Herald reports that Days of Future Past has become Fox’s second-most-expensive movie ever. The movie’s viral marketing campaign continues regardless: This month, a new video posits that Magneto had something to do with JFK’s assassination.

Bryan Singer hasn’t even finished shooting Days of Future Past, but he still decides to announce the next sequel, X-Men: Apocalypse, which is due out in 2016. Vulture breaks the news that Singer will be directing the film, and THR reports that Days of Future Past writer Simon Kinberg has been hired to oversee the X-Men cinematic universe, guiding future sequels and spin-offs. As we enter the year that Days of Future Past will be released, then, the narrative has already begun moving on to movies that will follow it.

Empire’s new issue includes 25 different cover images drawn from Days of Future Past, and an overwhelming amount of them are awful. In particular, the cover touting new character Quicksilver (played by Evan Peters) is a major yikes. The hair, the costume, the motion blur … it all comes in for a roasting on Twitter. 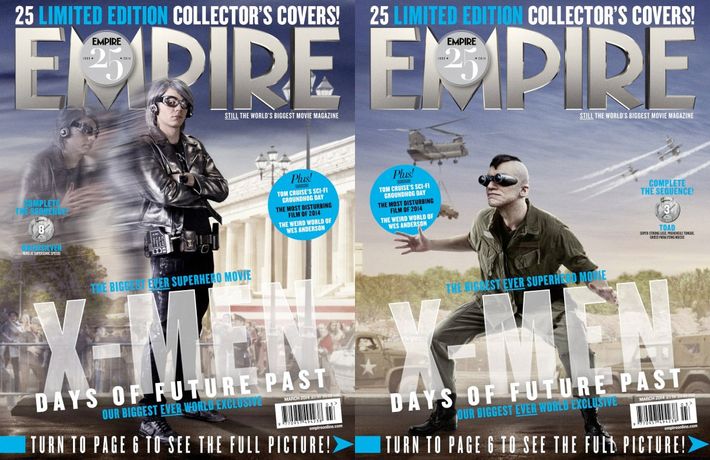 The marketing campaign continues to believe that seven-second trailers are a thing that should exist.

Finally, another full trailer is released, this one offering more of Peter Dinklage and the Sentinels. The TV campaign for the movie begins as well.

When your movie costs over $200 million, you’ve got to take on promotional partners, but some of Days of Future Past’s efforts in this arena are astoundingly ill-advised. In particular, a campaign with Carl’s Jr introduces the first footage of Quicksilver in motion … in a heavily derided ad that sees him using his super speed to eat a hamburger. Watch it and feel the secondhand embarrassment!

In addition to a new trailer, Fox launches a flurry of new clips in unusual places: After Ellen Page introduces one early fight sequence at the MTV Movie Awards, Fox pacts with Sony to append an X-Men scene to The Amazing Spider-Man 2’s credits, a rare of act of cross-studio promotion that comes about because of an unenforced picture pact in director Marc Webb’s contract.

Meanwhile, Hugh Jackman appears on WWE Raw to battle a Magneto stand-in as mediocre new character posters are released that “don’t inspire confidence,” according to a Slashfilm headline. Still, those are hardly the production’s biggest worries, as April brings word of a lawsuit filed against Bryan Singer, alleging sexual abuse of a minor. The director withdraws from all future X-Men promotion, and Fox sends Kinberg out in his stead to act as the film’s creative representative.

With Singer indisposed, the Days of Future Past cast members shoulder their fair share of the film’s marketing campaign, hitting up chat shows, appearing on magazines, and dancing to Blurred Lines in a bid for more viral-video clicks.

Fox begins screening the film, engaging early junket press first. Reactions are positive, with unlikely raves coming in for the much-maligned Quicksilver. Further reviews have been just as upbeat, suggesting that Days of Future Past could surmount a marketing campaign that’s been nothing short of all over the place. The X-Men win again! (At least until Apocalypse.)