The first season of Orange Is the New Black ended on a hell of a cliff-hanger, as the long-brewing conflict between Piper and her Bible-thumping adversary Pennsatucky finally erupted in a bloody beatdown. What sort of fallout from the fight will there be in season two, which premieres June 6 on Netflix? That remains to be seen, but to judge from these character posters debuting exclusively on Vulture — particularly, the badass motion poster of Piper taping up her knuckles — that season-ending battle royale has only made Piper into more of a fighter. (And if you’ve been re-watching season one, you know that’s quite the character arc for Piper, who was meek as could be when she first arrived at Litchfield Penitentiary.) Start speculating, and sit tight: Vulture will have even more exclusive character posters for you in the coming days. 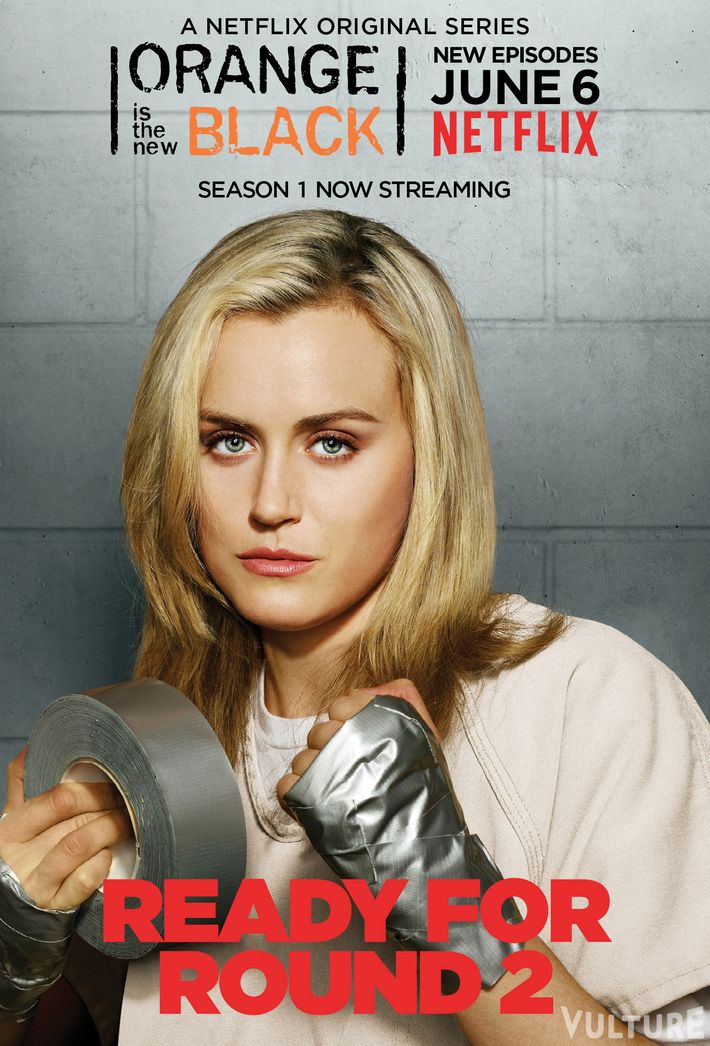 vulture lists 25 mins ago
Every Matt Damon Movie, Ranked For nearly three decades, moviegoers have been rooting for Matt Damon. We take a closer look at the actor’s career.
roll clip! 1:40 p.m.
Put Some Respect on Jennifer Hudson As Aretha Franklin in This Respect Clip Performing what else? “Respect.”
renewals 1:32 p.m.
‘Love, Victor’ Renewed for a Third Season Maybe the third time will be the charm for Victor Salazar.
box office 12:57 p.m.
Possible Future Presidential Candidate Attempts to Save American Box Office Whether Jungle Cruise can beat the pandemic-era record currently held by Black Widow will come down to The Rock’s ability to put butts in seats.
true crime podcasts 12:38 p.m.
This Week in True-Crime Podcasts: The Plot to Kidnap Frank Sinatra Jr. Plus, a new series hosted by Marcia Clark.
videology 12:35 p.m.
Billie Eilish Gets Flooded With Emotion in Her ‘Happier Than Ever’ Video Off her album of the same name, out today.
summer hits 12:24 p.m.
How Jack Antonoff Found That Magical Moment of Musical Clarity “One day you wake up and you’re like, Oh my God, we’re in this.”
animation 12:00 p.m.
Centaurworld Is a Cartoon Hybrid of Infinite Possibilities Creator Megan Nicole Dong walks us through the many tonal, stylistic, and musical twists winding through the new animated series’s all-centaur world.
backstories 11:49 a.m.
Welcome 2 Prince’s America As told by the band who helped make the late legend’s “lost” album Welcome 2 America over a decade ago — never released until now.
By Craig Jenkins
s! c! h! m! i! g! a! d! o! o! n! 11:30 a.m.
The Many, Many Musical-Theater References Behind Schmigadoon!’s Songs Co-creator Cinco Paul talks us through the origin of every musical number and the stories behind their references.
first look 11:28 a.m.
Imelda Staunton Will Have Order As The Crown’s New Queen Check out an “early glimpse” of the Netflix series’ third and final Elizabeth.
funny videos of the month 11:01 a.m.
The Best Comedy Shorts of July 2021 Rounding up our favorite funny videos of the month.
By Luke Kelly-Clyne and Graham Techler
movie review 10:56 a.m.
Disney’s Jungle Cruise Is Murder And not in the good way.
By Bilge Ebiri
broadway 10:43 a.m.
Broadway Will Require Vaccinations and Masks As Performances Return This Fall The requirement will last at least through October.
my single is dropping 10:40 a.m.
Mickey Guyton Releases Huge New Single ‘Remember Her Name’ As if you could forget.
the law 9:57 a.m.
T.J. Miller’s Fake Bomb Threat Charge Dropped Prosecutors partly blamed his past brain surgery.
tokyo olympics 2021 9:35 a.m.
A Day-by-Day Schedule of the 2021 Tokyo Olympics Let the games begin …
vulture recommends 9:00 a.m.
YouTube Might Be the Best Place to Watch the Olympics Specifically, the NBC Sports channel.
overnights 6:00 a.m.
Schmigadoon! Recap: Sex Education Josh and Melissa start to make a real impact on Schmigadoon, with mixed results.
overnights 4:00 a.m.
Ted Lasso Recap: A Heart-to-Tartt Talk The vibes are still good for the AFC Richmond crew, but how long can they get by on tie games?
More Stories