The thing about dicks is they don’t really need a backstory. What makes Crowley so fun — aside from his dialogue and Mark Sheppard’s entire performance — is that he’s likable despite being a straight-up b-hole most of the time. Actually caring about him could severely affect our ability to laugh at his mean one-liners or appreciate his dastardly betrayals. But when a character becomes such a fan favorite, there must be a temptation on the writers’ part to delve into backstory, and in doing so permanently erase the mystique that made that character great in the first place. In “King of the Damned,” Supernatural somehow figured out how to fill in some of the gaps of Crowley’s life while leaving him firmly in the realm of dickery. It’s no small feat to get viewers to root both for and against a character, but “King of the Damned” proved that sometimes you really can have it both ways. 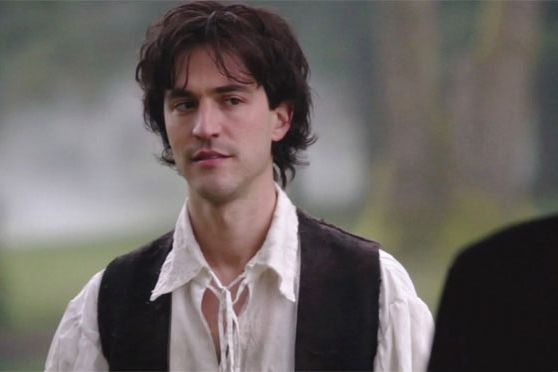 The episode’s cold open whisked us back to 1700s Scotland, a simpler time when a man wore wore billowy blouses, dreamt of the open sea, and thought nothing of a leather-jacketed demon moseying into his shanty and painting a blood sigil on his door. Yep, it was Abaddon, traveling back in time to abduct Crowley’s son Gavin. In past seasons, we’d learned bits and pieces of Crowley’s life back when he was still human, but “King of the Damned” brought a lot more of that to light, all shined through the prism of daddy issues. See, Abaddon demanded Crowley’s assistance in destroying the Winchesters and their First Blade and she’d decided to use Gavin as a bargaining chip. A clever move on her part, seeing as Crowley proceeded to spend most of the episode bickering with his son about his abuse and abandonment and generally exercising the last remaining shred of human decency he had left. For his part, Gavin adjusted rather quickly to 2014 after a brief bit of amazement at things like a lightbulb and the Cleveland skyline. (Line of the night: When Gavin naively asked if Abaddon and Crowley were angels, they responded simply, “Wow.”) 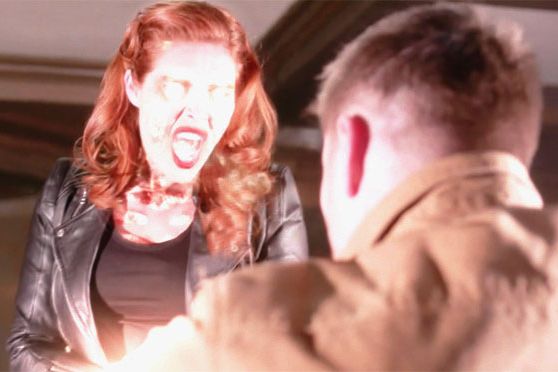 But just because Crowley had been confronted by the only living being for whom he had a plausible weakness didn’t mean he’d suddenly gone soft in the brain. At no point was it ever believable that he’d team up with Abaddon against the Winchesters. For one thing, we knew that he’d grown strangely fond of the boys, but for another Abaddon was the one building an actual HELL ARMY to take him down, so she was always going to be the bigger threat. For that reason, it wasn’t much of a surprise when Crowley pretended to lure the Winchesters to his hotel penthouse for Abaddon’s benefit only to tip Dean off that Abaddon was there by using their code word “Poughkeepsie.” The bros had retrieved the First Blade (which they’d been forced to fish out of the festering corpse in which Crowley had hidden it) and they arrived at Crowley’s penthouse to confront Abaddon for the last time. In a crafty move, Dean sent Sam to go “check the basement” while he personally took on the ginger Hell Knight. (He later explained this was because he was concerned he might go a little knife-crazy, which, fair enough!) After a brief ESP-enhanced tussle with Abaddon, Dean’s Mark of Cain–derived powers helped him get the upper hand on her and suddenly Abaddon was stabbed and glowing and then DEAD. Yep, one of the show’s longest-running villains, gutted like a trout. And that was before Dean got a crazed look in his eyes and stabbed her corpse a few dozen more times for good measure. Farewell, Abaddon. May you find peace in oblivion. 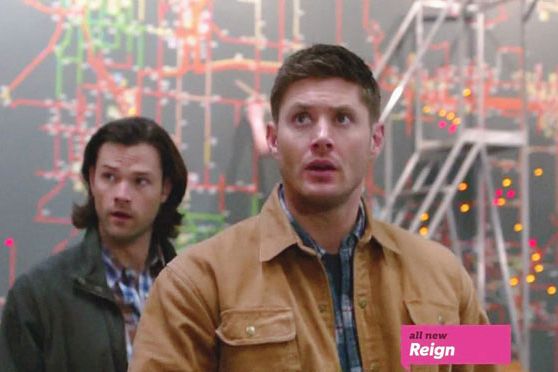 In a particularly handsome parallel to Crowley and Abaddon’s Hell showdown, the impending Heaven showdown was shaping up nicely. Castiel found himself presiding over a sizable army of angels and operating out of a legitimately cool-looking war room complete with an enormous, LED-lit map indicating, I guess, the locations of all the angels in the world? This angel agency (angelcy?) was even running clandestine kidnapping missions, having abducted one of Metatron’s loud-mouthed angels. After some crafty interrogation courtesy of the Winchesters, the guy spilled that Metatron had a secret door that linked Heaven and Earth, and he’d been building an elite Delta Force–style squad of angels. But when this informant became suddenly murdered while in captivity, Castiel realized he likely had a spy in his midst, so he decided to think outside of the box. By that I mean he arranged a meeting with Gadreel and attempted to recruit him as HIS secret agent. Though Gadreel very reasonably reminded Castiel that the old-school Heaven had not been his idea of a vacation, Castiel seemingly convinced him that Metatron was a bad dude and Gadreel should think carefully about history perhaps repeating itself. Anyway, yeah: Expect Castiel’s scheme to bear fruit in the coming finale. Maybe. Probably. 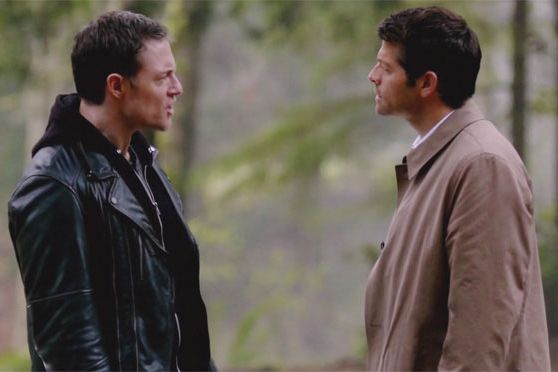 “King of the Damned” ended with a pair of emotional scenes, one heartwarming and one foreboding. Quick, guess which one involved Crowley! That’s right, the heartwarming one. Despite Sam’s insistence that Crowley’s son be sent back to his own era (thus avoiding the dreaded Butterfly Effect), Crowley refused and spirited Gavin away to live on in 2014, but not before having the most subtly poignant exchange Crowley’s ever apt to have. Advising Gavin to avoid cheap whisky and cheap prostitutes, it was a father-son non-bonding moment for the ages. Heck, they almost even hugged! We knew that Crowley hadn’t been a very good guy when he was alive (and indeed had originally sold his soul in exchange for a larger penis), so the suggestion that as the actual King of Hell he’d become marginally MORE human than before was a real doozy. It’s not clear if we’ll ever see Gavin again (and personally I’d prefer Crowley to put his humanity back into hibernation for a bit), but this was a nicely restrained way to make us care about Crowley’s emotional state, if only temporarily. Well done. 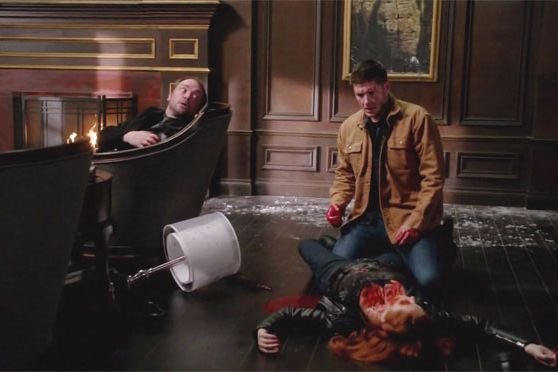 The closing scene between the Winchesters was the foreboding one. After the usual amount of bickering about how one had lied to the other in order to protect him (i.e., Dean sending Sam to the basement so that he could face Abaddon alone), Sam decided that Dean needed to get rid of the First Blade lest it corrupt his morality entirely. To that Dean simply answered, “No.” It was a chillingly straightforward answer that, in one word, promised a very complicated situation between the brothers in the near future. Abaddon may be dead, but the Winchesters’ safety is far from guaranteed. “King of the Damned” was both a riveting episode of mythology and a dark promise of the bad times to come. Cannot wait. 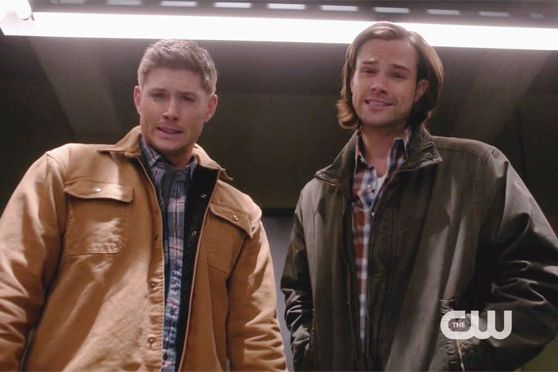 double consciousnesses 6 mins ago
The Fiction of the Color Line From Nella Larsen to Mariah Carey, Black women writers have long used passing stories to crack our façades of race, class, and gender.
By Brittany Luse
last night on late night 1:15 a.m.
Watch Desus & Mero’s Triumphant Return from Hiatus Drake goss, free food across NYC, and whether J.Lo lets Ben smoke indoors.
last night on late night 12:49 a.m.
SNL: Watch Rami Malek Demand Treats from Please Don’t Destroy Or else he’ll go on bad behavior.
overnights Yesterday at 11:07 p.m.
You Season-Finale Recap: It’s Always The Husband This show is so much more fun when Joe isn’t the craziest person in it.
celebrity engagements Yesterday at 10:42 p.m.
Kourtney Kardashian and Travis Barker Are Engaged Now they can mosh together forever.
overnights Yesterday at 10:30 p.m.
The Real Housewives of Salt Lake City Recap: Welcome to Our Playground An RHOSLC filler episode is still a delightfully unhinged good time.
overnights Yesterday at 10:23 p.m.
The Real Housewives of Potomac Recap: All Aboard Are Robyn and Gizelle’s powers beginning to decline?
overnights Yesterday at 10:03 p.m.
Succession Season-Premiere Recap: A Decent Move After nearly two years, Succession is back right where it left off: a high-stakes stare down between Logan and Kendall.
character study Yesterday at 10:03 p.m.
How Gerri Worked Her Way From Side Character to Key Player on Succession From pointed glances to an escalating affair, J. Smith-Cameron turned a functional role into Waystar Royco’s most compelling company woman.
theater review Yesterday at 9:46 p.m.
Dana H. Is Harrowing and Unmissable A big Broadway house doesn’t diminish any of its power.
snl Yesterday at 7:24 p.m.
Bowen Yang Shines As a Proud Gay Oompa Loompa on SNL “We’re up all night rehearsing the little song and dance we do when a child dies.”
solidarity forever Yesterday at 7:09 p.m.
IATSE and AMPTP Reach a Deal, Which Members May Still Reject Monday’s strike has been averted, but the dust has yet to settle.
cancellations Yesterday at 6:39 p.m.
FX Cancels Y: The Last Man Showrunner Eliza Clark has hope that the show will find a new home.
snl Yesterday at 6:31 p.m.
Aristotle Athari’s Angelo Makes a Wonderfully Weird Debut on SNL Alongside Daniel Craig and Rami Malek.
overnights Yesterday at 3:54 p.m.
I Know What You Did Last Summer Recap: I Am You Everyone assumes Alison survived and is the one stalking the group in this messy and unstable episode.
snl Yesterday at 3:33 p.m.
Rami Malek and Aidy Bryant Find the Perfect Mattress on SNL And give us a nearly perfect sketch in the process.
overnights Yesterday at 2:07 p.m.
Saturday Night Live Recap: Rami Malek Is One Weird Dude SNL thrives off hosts like Rami Malek, whose weirdness and commitment translate to very fun sketches.
overnights Yesterday at 12:02 p.m.
You Recap: Run Away With Me You finally reaches the level of bonkers it should have been at all season.
overnights Yesterday at 9:00 a.m.
You Recap: We’re Going Down Swinging It’s more apparent than ever that Love and Joe’s love language is violence.
snl Yesterday at 1:27 a.m.
Watch Pete Davidson and Rami Malek Imitate Each Other on SNL During Malek’s hosting debut.
More Stories