When you hear that someone attacked Gigi Hadid and Kim Kardashian in Milan and Paris, your first instinct is to wonder if they are okay (they are!), and your second is to wonder who would do such a thing. Apparently it was another in a long line of stunts by Vitalii Sediuk. The now 27-year-old Sediuk first moved to this country to work as a correspondent for the Ukrainian channel 1+1, but quickly became better known for his “pranks,” which could be best described as Borat without the wit or satire, but with much more of a desire to be famous. Here is a brief rundown of his behavior:

September 2011: Sediuk, saying he is a fan, hands Madonna hydrangeas at a press event. Madonna, not realizing she’s miked up, whispers, “absolutely loathes hydrangeas.” As Sediuk had hoped, this clip went viral; he knew Madonna hated and was allergic to that type of flower.

May 2012: Sediuk tries to kiss Will Smith at the Moscow premiere of Men in Black 3. Smith slaps him.

February 2013: Sediuk crashed the Grammy Awards ceremony, sitting in Adam Levine’s seat when the singer showed up late. While Adele was accepting her award for Best Solo Performance, Sediuk jumped up onstage and got shooed away by Jennifer Lopez. As a result, he was banned from L.A. Live, a massive complex home to the Staples Center, the Nokia Theatre, and many big events. He was able to avoid up to six months of jail time, thanks to a lawyer. His attorney Anthony Willoughby told The Hollywood Reporter, “If he stays clean for three years, he’ll be able to withdraw his plea and the charges will be dismissed.”

February 2013: Sediuk tried and failed to crash the Oscars wearing a very timely swan dress and carrying a bucket of fake Oscar statues. The police stopped him before he could get on the red carpet. 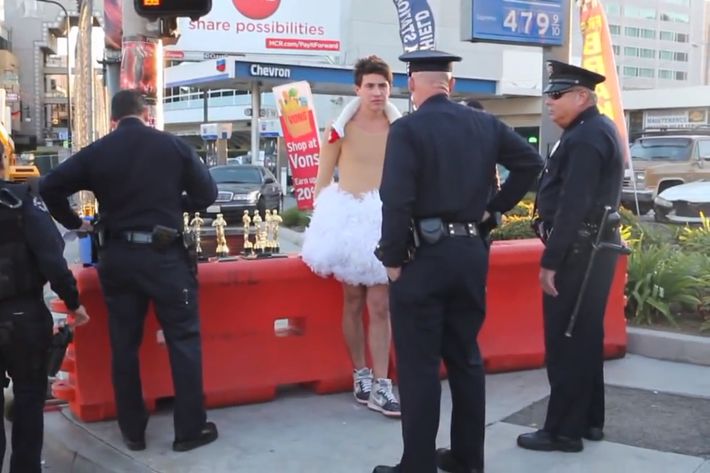 February 2014: Always keeping it fresh, he did the exact same thing to Leonardo DiCaprio at the Santa Barbara Film Festival.

May 2014: Wearing his influences on his sleeve, Sediuk wore a pink version of the Borat bathing suit and tried to crash the Met Gala.

May 2014: At the Cannes premiere of How to Train Your Dragon 2, Sediuk crawled under America Ferrera’s gown.

May 2014: Sediuk misinterpreted Fight Club and punched Brad Pitt at the Maleficent premiere in Los Angeles.

September 2014: At Paris Fashion Week, Sediuk tackled Kim Kardashian and knocked her to the ground. He addressed the attack in a statement, saying, “I hope Kim is OK and won’t be mad at me as I didn’t mean any harm. Kanye is one lucky man as Kim is a goddess!”

September 2014: Wearing a thong and gold-sequin top, Sediuk jumped Ciara and hugged her shortly before a fashion show in Paris.

October 2015: Sediuk tries to ambush Anna Wintour during Paris Fashion Week. She swiftly shuts him down. Later, he tried to give Miranda Kerr a kiss. She was equally unamused.

September 2016: Sediuk grabs Gigi Hadid as she leaves the Max Mara show in Milan. She gives him a swift elbow to the face. He later claims it was “a form of protest” against the tabloid nature of the fashion industry. Sure.

September 2016: At Paris Fashion Week, Sediuk targeted Kardashian yet again, running up to her from behind and kissing her left butt cheek. He was quickly intercepted by Kim’s pro security team.

Sediuk says he wants to become an actor and director. Here is a trailer for a short film he made based on his experience with Madonna.

He is the worst.

last night on late night 7 mins ago
WWHL Made Christine Quinn Have a Selling Sunset Reunion Do-Over Andy Cohen grilled Quinn on her COVID diagnosis timeline.
theater review 28 mins ago
In Exception to the Rule, Detention Is a Whole Other Class of Punishment Dave Harris’s play goes into an after-school penalty that’s not really intended to teach lessons.
overnights 9:30 p.m.
The Real Housewives of Beverly Hills Recap: Tabled Discussion Supposed empath Sutton is at the center of two boring, petty fights that don’t amount to much.
solidarity forever 8:05 p.m.
Squid Game Season 2 Wants Us All to Just Get Along Solidarity forever!
let's go party 7:12 p.m.
Greta Gerwig’s Barbie World Keeps Getting Bigger Issa Rae, Hari Nef, and Michael Cera are the latest to jump in.
hot goss 7:07 p.m.
Rumormongering Joins the Cast of Greta Gerwig’s Barbie Triple-cast Ken and Barbie makes it safe. Triples are best.
the industry 6:22 p.m.
Members of Scott Rudin Broadway Productions Freed From NDAs Including actors and stage managers on To Kill a Mockingbird and West Side Story.
sorry to bother you 6:11 p.m.
Armie Hammer True-Crime Special Will Detail 5 Generations of Family Sins Father, son, and House of Hammer.
vulture 10x10 4:01 p.m.
The Lightning Puzzle 18-Across, Three Letters: The ‘R’ in “The Sopranos” logo is one.
under oath 3:40 p.m.
Amber Heard’s Ex–Best Friend Testified ‘Hair Was Ripped Out of Her Head’ Amber Heard’s sister also took the stand.
swiftology studies 101 3:17 p.m.
Dr. Taylor Swift Diagnoses NYU Grads As Cringe “No matter how hard you try to avoid being cringe, you will look back on your life and cringe.”
she *and* him? in this economy? 3:10 p.m.
Ahead of Their Brian Wilson Tribute Album, a Very She & Him Q&A Zooey Deschanel and M. Ward on the Beach Boys, harmonies, and why their band has lasted this long.
now streaming 3:00 p.m.
Checking in on Netflix’s Original Movies: May 2022 Edition A Rebel Wilson rom-com, a World War II espionage thriller, a Bollywood genre mashup, and more.
rendezcruise 2:32 p.m.
Tom Cruise Is Being Boring at Cannes The once-infamous agent of chaos has overcorrected his press strategy as he promotes Top Gun: Maverick at the French festival.
burners 2:09 p.m.
A Celebration of Life for Margot Robbie’s Alleged Letterboxd Account Fans found an account appearing to belong to the Barbie star … then it went dark.
overnights 2:00 p.m.
Conversations With Friends Recap: You Are The Bane of My Existence Okay, so maybe having an affair with an older married man is more challenging than it initially seemed.
close read 2:00 p.m.
Tom Cruise’s Last Stand Thirty-six years after the original, Top Gun: Maverick eulogizes the actor’s entire career, and an America that may not exist anymore.
By Bilge Ebiri
podcasts 1:53 p.m.
This Era of Reply All Is Ending Hosts Alex Goldman and Emmanuel Dzotsi will sign off in June, leaving the show’s future unclear.
music 1:11 p.m.
The 18th Century’s Surround-Sound Machine Inside the organ at St. Bartholomew’s.
role call 1:00 p.m.
Kathy Najimy Answers Every Question We Have About Sister Act On how Entertainment Tonight host Mary Hart inspired the character’s relentless pep and sneaking backstage in a bunny costume to meet Bette Midler.
By Matthew Jacobs
More Stories