Seinfeld not only paved the way for much of modern television (as our Matt Zoller Seitz argues), it also created its own financial empire. Here, an examination of the show’s salaries, mini-economies, and GDP impact.

$3.1 billion: The amount the show has generated since entering syndication in 1995.

$400 million: What Larry David and Jerry Seinfeld can each make just from the most recent syndication cycle. 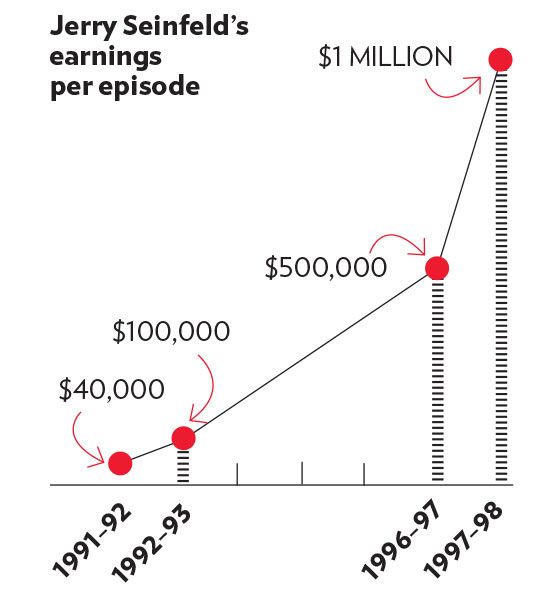 For a potential tenth season, Seinfeld was offered $5 million per episode, or $110 million per year. He turned it down.

How Seinfeld Paved the Way For Tony Soprano

The Long March of the Soup Nazi

1997: Yeganeh strikes deal to open kiosks in New York and Canada. It doesn’t pan out.

1998: Goes on the Home Shopping Network to sell frozen soups. Gets 1,600 orders in eight minutes.

2007: Forty locations have opened, but many struggle with meager profits and lawsuit threats.

Kenny Kramer:  Since 1996, he’s given weekly tours during tourist seasons at $37.50 a head. His bus holds 61 people. “I’m not that ambitious, but the revenue is enough to have a positive cash flow.”

Snapple: It was a regional brand, recalls Patti Ganguzza, who placed it on the show. By 1994, Quaker Oats would overpay $1.7 billion for the company—then resell it in 1997 for just $300 million.

Junior Mints: Six months after “The Junior Mint” aired, the product line was bought, along with several other candy brands, by Tootsie Roll Industries for $81.3 million.

Festivus Poles: The Wagner Companies, a Milwaukee railing company, has owned exclusive rights to make Festivus poles since 2005. It sells a steady 800 per year, at up to $39 apiece.

Tom’s Restaurant: The owners of the diner at 112th and Broadway never asked for an appearance fee, but today, owner Mike Zoulis says that 5 to 10 percent of his customers are there because of the show.

The Bureau of Economic Analysis changed its calculation of the country’s gross domestic product in 2013, creating a new category that counts long-running shows like Seinfeld as investments (rather than expenses). The tweak adds $70 billion to the GDP of the United States.

*This article appears in the June 30, 2014 issue of New York Magazine.

+Comments Leave a Comment
Breaking Down the Seinfeld Economy