When you woke up today, did you have trouble recognizing yourself? Did you panic when you noticed your newly tawny skin, hair extensions, and frosted lip-gloss? Are you now fighting the desire to sensually arch your back wherever you go? If you answered yes to any or all of these questions (or if you happen to be reading this article while running from an explosion in six-inch heels), don’t panic: You may be a woman in a Michael Bay movie. But just in case you need more proof that your lady charms are featured in a film from the action auteur who directed Transformers, Bad Boys, and Armageddon, Vulture has supplied you with a handy list of further Bay-related symptoms. Read up, then call your (hot) doctor.

1. You’re dressed all in white
In case it wasn’t clear from the collage at the top of this article, a Michael Bay film will offer you more white dresses and separates to wear than Olivia Pope’s closet. It’s by far Bay’s favorite color to costume women in, and no matter what sort of stunts you’ll be put through — whether you’re rolling down a hill, escaping a car crash, or sprinting through smoke and fire — you can bet that those whites will stay as clean and pristine as when they first came off the clothesline (a clothesline that was photographed in slo-mo during magic hour with the American flag in the distance, obviously). 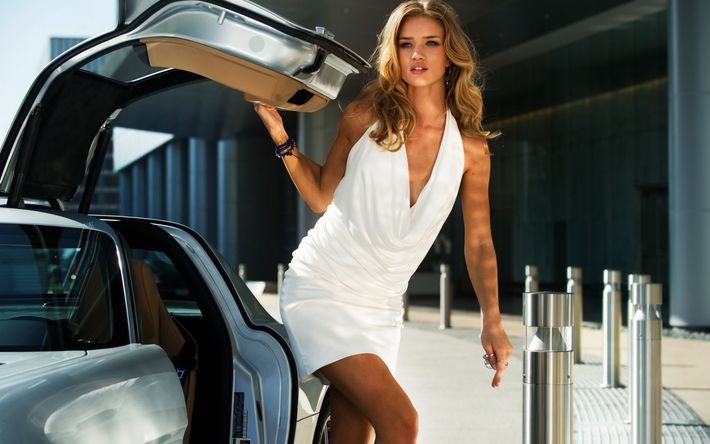 2. You’re introduced legs first
Women rarely get their faces in the shot when they first appear in a Michael Bay movie. More likely, they’ll be introduced from behind, typically in an appreciative pan that starts from their high heels and ogles upward. If they’re not wearing high heels, then they’d better be walking on tiptoes as if they were, as in Rosie Huntington-Whiteley’s first scene from Transformers: Dark of the Moon:

3. Every male character is discussing how hot you are
Nicola Peltz plays Mark Wahlberg’s 17-year-old daughter in Transformers: Age of Extinction, and her first two scenes are dominated by men who call her hot (including her dad’s friend … awkward!). Later in the movie, in what may be the longest dialogue scene in the film, Peltz’s older boyfriend explains to a horrified Mark Wahlberg why it’s legal for him to fuck her, thanks to the state’s Romeo and Juliet laws. This is how time flies: Somehow, Marky Mark is now playing the protective dad from Fear.

4. You look kind of orange
As the other characters never fail to remind us, Nicola Peltz is a pretty young woman who was nevertheless blasted with Homer Simpson’s makeup gun before each of her scenes in Transformers. She’s lucky that all that bronzer didn’t leave any stains on her immaculate white blouses. 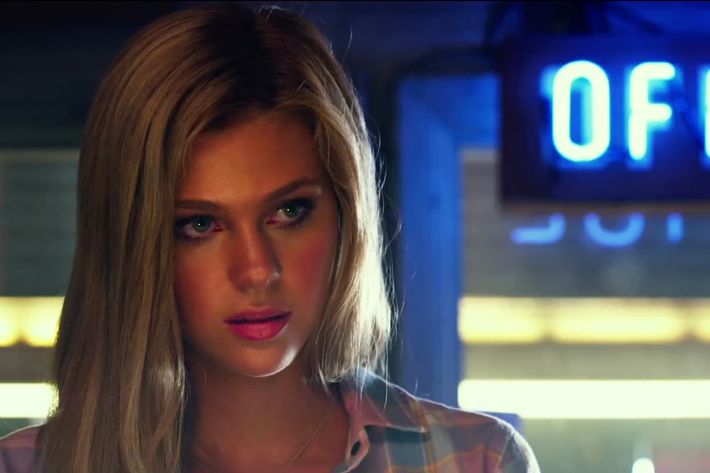 5. Your midriff is showing
If you’re not wearing white in a Michael Bay film, then it’s probably because you’re in Daisy Dukes, and if you’re in Daisy Dukes, you are going to show off that toned midriff. Sure, you can try to elude your fate by wearing a modest one-piece dress, but that will simply prompt Ben Affleck to unbutton it down the center so that your navel can be photographed in loving close-up before Affleck tries to stuff a children’s cookie into your no-no place.

6. You cower during action sequences
The new Transformers movie actually does introduce a female character, played by Li Bingbing, who gets to kick a little ass and even save a man. For a Michael Bay movie, this is positively transgressive. More often than not, as in the cases of Peltz, Megan Fox, Rosie Huntington-Whiteley, and all of Bay’s other female leads, there is little to do in action sequences besides cower, shout at men, and get captured. Literally, this is what Fox spent the entirety of the second Transformers movie doing: 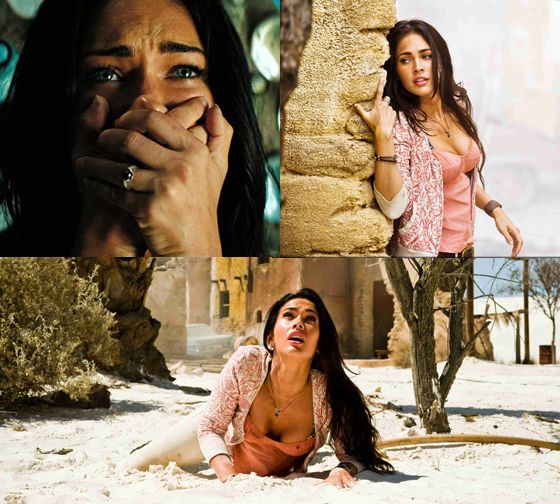 7. You’ll probably be called a bitch at some point
You did everything your Michael Bay movie asked of you. You ran around wearing a fake tan, precipitous heels, and a slinky white dress! You hid behind a wall and screamed the name of your male lead repeatedly! You bent over any waist-high object you could find, curving your curves just so! Congratulations. For your reward, a two-foot-tall robot will deem you “hot but [not] too bright” and call you a “crazy bitch” in a four-quadrant movie that many families will see and laugh at together. Enjoy!

(human) nature is healing 8 mins ago
Rolling Loud to Roll Into Miami With Travis Scott, Post Malone, A$AP Rocky Not to mention Megan Thee Stallion, Bobby Shmurda, Lil Uzi Vert…
extremely online 5:40 p.m.
A Complete Timeline of the James Charles Allegations and Controversies YouTube has “temporarily” demonetized his channel in response to the sexting scandal.
books 5:00 p.m.
Michaela Coel Announces Her First Book, Misfits: A Personal Manifesto Set to destroy you this September.
the teens 4:51 p.m.
Ginny & Georgia Will Return for Some More Oppression Olympics Season two, here we come.
obits 4:40 p.m.
The Irreplaceable Black Rob, Bad Boy’s First Street Story His ascendance is pivotal to documenting the rise of Bad Boy Records, both before and after Biggie.
By Shamira Ibrahim
oscars 2021 4:40 p.m.
The 2021 Oscars Will Be a Large, Unmasked Gathering Which will count as a film production, making all that possible.
casting 4:09 p.m.
Vin Diesel Is Doing a Rock ’Em Sock ’Em Robots Movie and We Have a Casting Idea What about Dwayne “The Red Rocker” Johnson?
my single is dropping 3:46 p.m.
Chvrches Are Back With a Huge Anti-Sexist Anthem, ‘He Said She Said’ Off the band’s upcoming followup to 2018’s Love Is Dead.
avatar 2:58 p.m.
Shailene Woodley and Aaron Rodgers Are Disney Vloggers Now This is the most magical interview on earth.
tv review 2:38 p.m.
Philly D.A. Is the Second Coming of The Wire, in Docuseries Form The sprawling series maps a citywide web of interlocking problems, attempted solutions, and the many individuals caught inside.
tiny desk (home) concerts 2:22 p.m.
Rina Sawayama Is the Big Boss of Her Tiny Desk Concert “Yes, I am the CEO.”
charts (taylor's version) 2:00 p.m.
Taylor Swift’s Fearless Is a No. 1 Album Again The first-ever No. 1 album of rerecorded material.
on comedy 12:58 p.m.
Morrissey Isn’t Charmed That The Simpsons Made Him a Racist Carnivore “It only serves to insult the artist. They should take that mirror and hold it up to themselves.”
quar goss 12:30 p.m.
Zoë Kravitz and Taylour Paige Are ‘A Thing,’ Whatever That Means Okay, yes.
trailer mix 12:05 p.m.
Watch the Teaser for That Damn Michael Che His sketch series’ title has huge “why I oughta!” energy.
chat room 12:00 p.m.
Sound of Metal Star (and Oscar Nominee) Paul Raci Would Do This All Again At 73, one of Hollywood’s hardest-working actors talks awards recognition and finally being given the chance to step into the spotlight.
trailer mix 11:49 a.m.
Marvel Gets Simu Liu a Shang-Chi Trailer for His Birthday Lots of punching and kicking.
the oscars 11:39 a.m.
This Year’s Oscars Ceremony Will Be ‘Completely Different’ “It’s a take that doesn’t leave room for comparison,” says the show’s director, Glenn Weiss.
art 11:30 a.m.
Dancing on Your Own (With 99 Other People) A temporary club for our in-between moment.
By Devon Ivie
awards season 11:17 a.m.
Maren Morris, Luke Bryan Win Big at 2021 ACM Awards The show aired out of three classic Nashville venues.
More Stories