What exactly is scissoring? Does folic acid burn? (Trick question.) If you’ve neglected real-life obligations to binge-watch season two of Netflix’s Orange Is the New Black — or maybe even if you’re pacing yourself, like a responsible TV consumer — you’ve likely wandered into unfamiliar word territory. Besides the commonly used prison terminology and cultural references on the show, there’s also language that’s very specific to Litchfield Federal Prison. Below, Vulture presents a guide to the frequently used vernacular of Orange Is the New Black season two. Warning: necessary spoilers within. Use the glossary responsibly.

Attachment parenting: A vaguely yuppie-ish parenting style that focuses on bonding with your child through constant affection and nursing. Said to promote healthy emotional development. Polly is trying this method, but says “It’s fucking bullshit.”

Bang-Off: A contest between Nicky and Big Boo to see who can have sex with the most women at Litchfield. Subjects are worth a varying amount of points (Piper, 3; a guard, 10).

Big House Bugle: The name of the prison newsletter, founded by Piper Chapman.

Black Adoption Festival: An event put on by the Los Angeles County Department of Children’s Services to help match foster kids with parents. This is where season two’s villain, Vee, introduces herself to a young Taystee.

Cockroach: An insect trained to transport cigarettes from camp to solitary confinement. The ideal length for a successful roach courier is between two and four inches.

Compassionate release: When an inmate, typically one with little time left on her sentence, is released from prison early. Often happens as a result of overcrowding or illness. Jimmy is this season’s heartbreaking example.

Connect: A dealer who sells directly to customers. The first time they meet, young Taystee tells Vee, “Aw shit, you a connect,” but Vee rejects the title. She’s a “businesswoman.”

Dress for Success: A real-life program that teaches women how to select professional attire for job interviews. Dress for Success co-sponsors the Litchfield Mock Job Fair, so you have them to thank for the below photo.

Folic acid: A type of B-vitamin that reportedly lowers the risk of infant disease for pregnant women. When Daya mentions its prenatal benefits, her guard-boyfriend Officer Bennett jokes that it “sounds dangerous,” and makes a sizzling noise, implying that it’s real acid (Ha-ha, Bennett, but no). He later makes up for it by bringing Daya spinach, which is high in folic acid and does not burn.

Funfetti: A truly delicious boxed cake mix topped with sprinkles. Vee shares some with Taystee’s crew to win them over. This is high-level strategy.

Furlough: A program that allows an inmate (Piper, in this case) to leave prison grounds temporarily.

Gay-for-the-stay: Being a lesbian only in prison. What Vee labels Taystee after seeing her cuddle with Poussey.

Golden Girls: A nickname for the elderly crew at Litchfield.

Groupon: An app that offers special discount services to users; Larry’s father uses one for a gay bathhouse.

Lingual frenulum: The stringy connective membrane below the tongue. While being loaded onto a plane for transport to Chicago, an inmate claims she can’t lift her tongue because she has a “tight lingual frenulum.”

Litchfield lighter: A makeshift cigarette lighter that’s crafted using a battery and a gum wrapper. According to this video, it’s actually possible:

Moppett: The name of the mop with the British accent that Crazy Eyes brings to life. (Alternate spelling: Moppet.)

Nein: Translates to “no” in German. POUSSEY SPEAKS GERMAN!

Plushious: A description for a woman with curves. Coined by Black Cindy.

Pirozhki: Stuffed buns or pies originating from Russia. Red boasts that her version of the pastry is top-notch. Here is a sample recipe.

Safe Place: A therapeutic support group started by Officer Healy. In one meeting, he asks Flores (the woman who used to talk to Diablo in the bathroom stall) to use the “feelings chart” to express herself.

Scissoring: A sexual position that involves two women wrapping their legs in a scissorlike manner for stimulation. Poussey is not buying it: “I told you scissoring wasn’t a thing!”

Shot: A written violation for inmates who disobey the rules. Sometimes for minor things (“I don’t like your face,” says Mendez). Guards have to issue a certain amount to fulfill Figueroa’s shot quota.

Sideboob: The name of Officer Joe Caputo’s band. Best known songs: “You Slay Me” and “Working in the Mine.” Fun fact: The band exists in real life.

Slock: A combination lock inside of a sock. Vee uses it as a weapon against Red.

Stand and Deliver: A device for women who want to pee standing up. Consists of two pieces: a plastic funnel and a tube. Inventor: Poussey.

Tiger Balm: An ointment used as a pain reliever. Not ideal for lips or eyeballs, according to Crazy Eyes.

Vig: Short for Vigorish; refers to the dealer’s cut of profits. Taystee mentions it while breaking down how much money one of Vee’s customers owes.

Yoda: The nickname for the roach that runs smokes to solitary. Piper mistakenly ends its life. See also: cockroach. 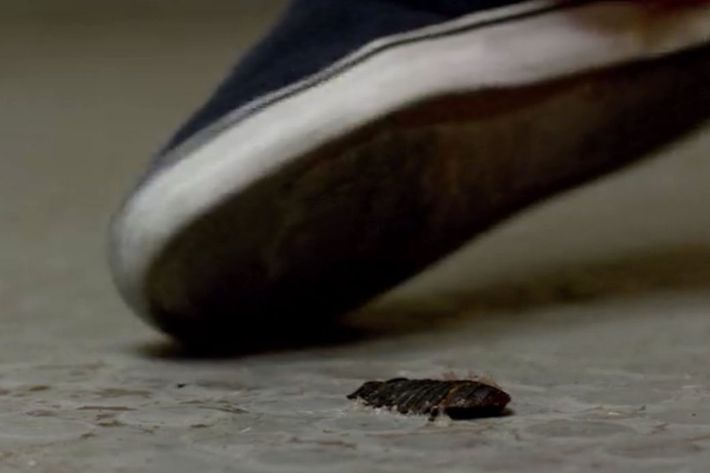 Zoo, Bronx: The world’s largest urban zoo; also a useful insult. When Red returns from hiatus and goes to get her food, Maria calls her “a big Russian bear” and says, “She’s hibernating until she gets strong again.” Maritza retorts: “What the fuck do you know about bears? What, you live by the Bronx Zoo or something?”

celebrity engagements 29 mins ago
Macaulay Culkin and Brenda Song Are Engaged Please reunite the Pizza Underground to play the reception.
theater review 9:00 p.m.
Skeleton Crew, Transferred Uptown, Loses Some Muscle Phylicia Rashad and company try to make a small show fill up a big stage.
my single is dropping 8:33 p.m.
Listen to Machine Gun Kelly Cover Frank Ocean’s ‘Swim Good’ Apparently MGK thinks he can swim better.
this! is! a winner! 7:30 p.m.
A Talk With That Cool-Glasses Guy Who Defeated Amy Schneider on Jeopardy! “I thought I was destined to lose, so I just did my best.”
By Devon Ivie
this! is! devastating! 7:30 p.m.
Jeopardy! Queen Amy Schneider Ends Her Million-Dollar Reign Rhone Talsma unseat the champion after her 40-day streak.
fight club 6:38 p.m.
Chuck Palahniuk Is Fine With Chinese Censorship of Fight Club, Actually The Chinese ending is actually closer to the book.
extremely online 5:14 p.m.
We Asked Linguists Why People Are Adding -Ussy to Every Word A calzone is a pizzussy. A wine bottle has a winussy.
allegations 3:14 p.m.
Bill Cosby Calls We Need to Talk About Cosby Director a ‘PR Hack’ He also denied all claims against him.
lime crime 2:50 p.m.
Did Dakota Johnson Lock People in a Blue Bottle Coffee? An Investigation. Blog Day Afternoon.
podcasts 2:13 p.m.
It’s the End of an Era for Radiolab After nearly two decades, creator Jad Abumrad is stepping down from the highly influential audio series.
videology 1:53 p.m.
Grimes Brings Blackpink’s Jennie, Dorian Electra Into Her Metaverse We think, anyway, in the “Shinigami Eyes” video.
things to look forward to 1:25 p.m.
HBO Releases My Brilliant Friend Season 3 Trailer, Amici We’re going back to Naples this February.
this month in comedy podcasts 1:00 p.m.
This Month in Comedy Podcasts: Taylor Tomlinson’s Sad in the City Rounding up our favorite comedy podcast episodes of the month.
the lads are fighting again 12:21 p.m.
Morrissey Wants Johnny Marr to Cease and Desist, Bitch “Must you persistently, year after year, decade after decade, blame me for everything?”
vulture 10x10 12:00 p.m.
The Ungodly Puzzle 27-Across: This is what it sounds like when doves cry.
late night 11:55 a.m.
Meet Lou Wilson, Jimmy Kimmel Live!’s New Announcer We spoke with the comedian about his fancy, brand-new late-night gig.
overnights 11:50 a.m.
The Book of Boba Fett Recap: A Very Special Guest Star Wait, did we turn on the right show?
allegations 11:45 a.m.
Director Amy Berg Says She Was Stalked Online While Making Phoenix Rising “There’s a lot of like online stalking in that world, the Brian Warner world, so we had to take a look at that.”
deaths 11:18 a.m.
Peter Robbins, Charlie Brown Voice Actor, Dead at 65 He played the character in beloved specials like A Charlie Brown Christmas and It’s the Great Pumpkin, Charlie Brown.
get naked 8:00 a.m.
Could John Cameron Mitchell’s Joyfully Sexual 2006 Film Shortbus Get Made Today? It didn’t fake the sex, and I was at the tryouts.
More Stories