Is the summer movie season starting to seem a little bit repetitive to you? Starting next week, every moviegoing weekend in June will bring yet another studio sequel to the multiplex, but there is some salvation to be found, as long as you know where to look. On June 27, Radius-TWC will release the highly anticipated Snowpiercer, a unique sci-fi tale starring Chris Evans, Tilda Swinton, and Octavia Spencer, and directed by Bong Joon Ho (The Host). Vulture can exclusively debut the film’s U.S. theatrical poster.

Set in 2031, Snowpiercer follows a motley crew of characters who’ve managed to survive on a frozen, uninhabitable Earth by piling into the film’s titular train. In the back of the train live the have-nots, including Evans, who’ve gotten so fed up with their cruel treatment by the privileged people in the front section that they start a revolution, banding together to fight their way to the train’s head. What that means for you, the viewer, is an abundance of Bong’s visual imagination as the have-nots make their way through increasingly wilder train compartments, though nothing in the film is as outrageous as Tilda Swinton, who plays a villainous, deliciously frumpy martinet destined to lock horns with Evans.

Check out the poster below and start getting excited: Though the film went through a little bit of behind-the-scenes drama on its way to release, the version of Snowpiercer out June 27 will be Bong’s full, acclaimed director’s cut. 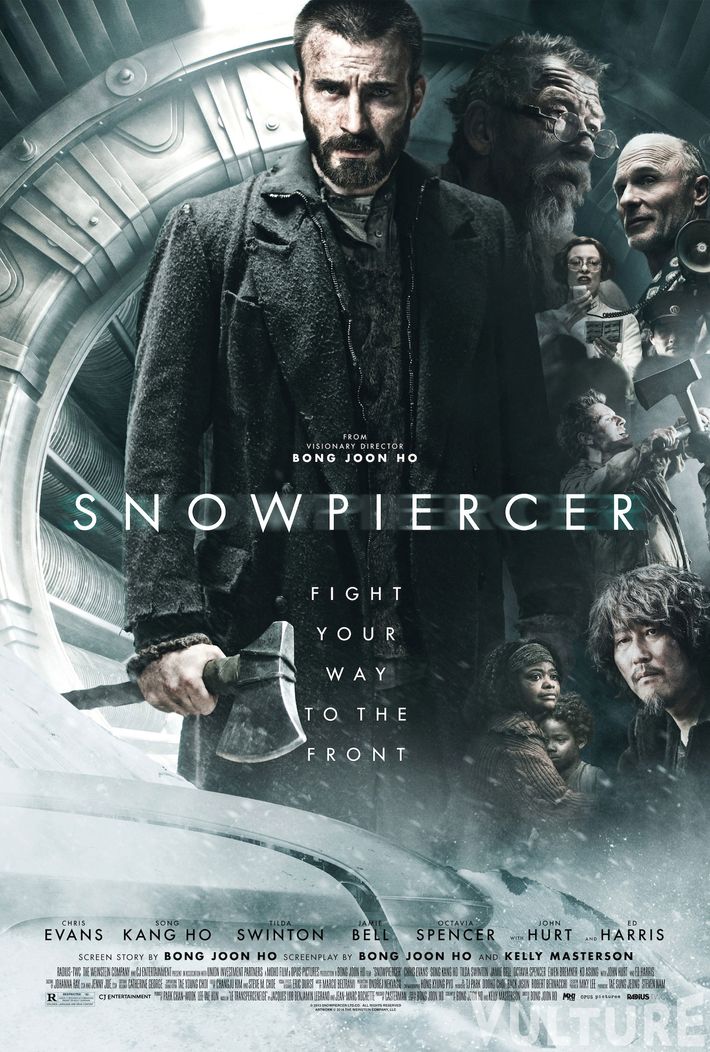 1.5x speed 3:05 p.m.
Shaking Out the Numb, How It Happened, and 3 More Podcasts Worth Trying Including the end of Trump, Inc.
vulture lists 2:45 p.m.
Megan Amram’s 103 Best Trump Tweets, Ranked Megan Amram has hundreds of great Trump tweets. Here are the best of the best.
By Megh Wright
extremely online 2:06 p.m.
Okay, You Can Unmute @POTUS Now The Twitter handle is under new management.
inauguration day 1:42 p.m.
Return to Normalcy With Some Bernie Sanders Memes The only man who dresses for January, ladies and gentlemen.
bye 1:35 p.m.
Donald Trump Went Out As He Came in: Playing Songs by People Who Hate Him A perfect season-finale moment.
we did it joe 1:07 p.m.
Jennifer Lopez Slips ‘Let’s Get Loud’ Into Her Biden Inauguration Performance A new era indeed.
inauguration day 12:39 p.m.
Watch Lady Gaga Perform the National Anthem at the Biden Inauguration Obama, Biden, Bush, and more attended a one-song Lady Gaga concert today.
inauguration day 12:36 p.m.
Watch Amanda Gorman’s Historic Poetry Reading at the Biden Inauguration “But while democracy can be periodically delayed, it can never be permanently defeated.”
inauguration day 12:32 p.m.
Garth Brooks Turns ‘Amazing Grace’ Into a Sing-along at Biden Inauguration He even took off the hat.
vulture lists 12:30 p.m.
The 20 Best Movies About American Presidents Frost/Nixon, Secret Honor, Lincoln, and more.
bachelor nation 10:58 a.m.
Did Matt James Seriously Just Spoil His Bachelor Winner on … Spotify? Somebody tell this man that his streaming history is public.
lime crime 10:18 a.m.
Dakota Johnson Lied to Us About Loving Limes You can’t spell “limes” without “lies.”
reality tv 10:09 a.m.
Real Housewives of Salt Lake City Will Return for Season 2, Andy Cohen Confirms Keep those Wednesday nights open.
vulture recommends 9:00 a.m.
Call My Agent! Brings a Succession Energy to the Parisian Entertainment Industry The French series offers an alluring new vantage point on the industry-insider machinations we typically associate with Hollywood stories.
last night on late night 2:03 a.m.
Seth Meyers Takes One Last Closer Look at the Trump Presidency “You left the nation in ruins.”
pardon? 12:00 a.m.
Trump Pardons Lil Wayne on His Last Day in Office Along with Kodak Black.
covid-19 Yesterday at 6:59 p.m.
Nurse Lori Marie Key Sings ‘Amazing Grace’ at COVID-19 Memorial Vice President-elect Kamala Harris introduced her.
inauguration day Yesterday at 6:30 p.m.
Here’s How to Watch the 2021 Presidential Inauguration of Joe Biden What time is it? Can I watch it if I don’t have TV? What’s the deal with the Celebrating America prime-time special? We have the answers.
obituary Yesterday at 6:08 p.m.
No One Was Safe from Phil Spector The producer made countless contributions to music, but his ego overshadowed them all.
extremely online Yesterday at 6:05 p.m.
James Charles Covers ‘Drivers License,’ Reminds You That He Sings The MUA took on Olivia Rodrigo’s hit song.
More Stories