There are some polarizing figures on Orange Is the New Black. Is Larry the worst, or the worst the worst? Is Vee an alluring antiheroine, or just the frustrating villain? Where exactly is Morello’s accent supposed to be from? Despite these and other reasonable differences, fans of the show can agree on one thing: Taystee is the best. She’s a distillation of the show’s best qualities, be it the pop references, the persistent conclusion that people contain multitudes, or the harsher emotional truth that our behaviors often reflect a fundamental childhood wound from which we’ve never recovered. Here are some of her best moments, though honestly, every Taystee moment is a good Taystee moment.

“So I’m sitting there, barbecue sauce on my titties, and I’m like, ‘What the fuck? Again?’”
It’s not clear just yet how this part of Taystee’s backstory from season one meshes with what we know about her life with Vee et al., but it’s still one of the non-sequitur highlights of the series.

“Brichelle, you back the fuck off!”
Baby Taystee’s performance of “Beautiful” is lovely, but this scene makes the cut because of how much we learn about Taystee in such a short period of time. She’s so, so desperate to be loved and accepted — and she can’t quite tell why her brains and charm aren’t enough. In adulthood, this is what makes her both loyal and vulnerable. 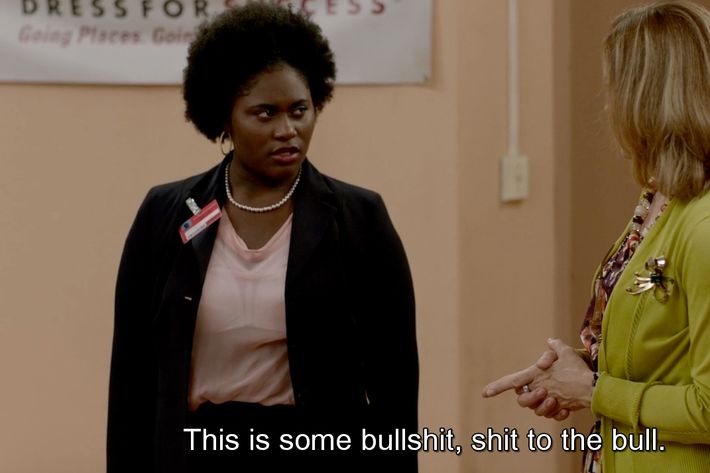 “At job fair last year, this was the winning outfit.”
Taystee’s vulnerability is even more wrenching when we see her naïveté in the face of a dehumanizing, debasing prison system. She does everything right at the job fair, and yet the Dress for Success lady doesn’t pick her. (It is some shit to the bull.) Later, when Fig laughs in her face about job placement and humiliates her by calling her a baby, it’s clear that this is what Taystee is going to face for the rest of her life, even post-incarceration. Someone! Give this lady a chance! 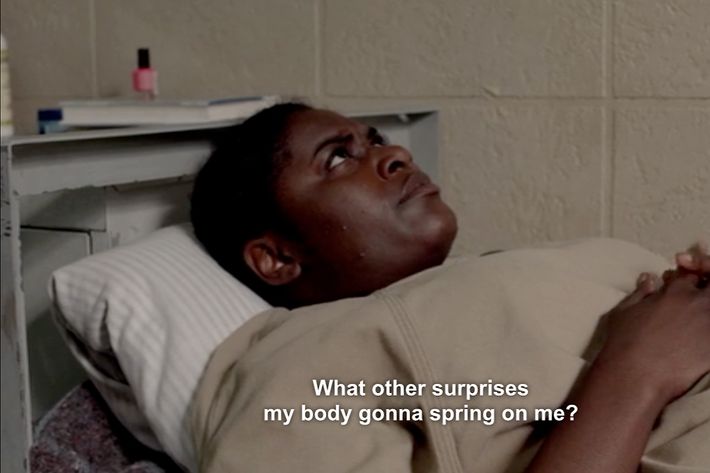 “All this pee-hole business, like — what the fuck else don’t I know?”
In all the ways that prison makes other characters hard or cynical (or at least harder and more cynical), Taystee doesn’t seem as affected. She’s no pushover, and she’s certainly no idiot, but there’s a deep gentleness to her and her outlook.

“Steve Irwin, the crocodile hunter! Rest in peace, bee-tee-dubs.”
She’s super pop-savvy, but the tag team of Taystee and Poussey is basically unbeatable. This is what made their rift so agonizing in season two — even if you don’t ‘ship them as a romantic pair (though many, many do), one can still believe in the power of their friendship.

“But the dude’s like, real with red hair. Not my thing.”
When Taystee gave up her job in the library to work with Vee, we knew that was something major: Taystee’s one of the best-read characters on the show. (Step off, Piper.) Luckily, when she reunited with Poussey, there was still time for a few book suggestions, namely Outlander. “You ever read this?” she asks Poussey. “Lady travels back in time to Scotland, hooks up with this big, sexy outlaw type, and they be getting it day in and day out.” Then she explains that if she were to go back in time, she’d want a “Nubian king,” which she says in a jokey African accent, complete with dance moves. One of the reasons Taystee is so endearing is that she makes a lot of jokes, and not for the audience’s benefit, but for the entertainment of other characters. (See also every segment of Amanda and McKenzie, the bougie white characters she and Poussey like to play.) When she goes for such a big joke here, as part of her reconciliation with Poussey, we know they’re back together for good.