True Blood has never been bad. LET ME EXPLAIN —

Okay, I just lost half of you, but that’s probably appropriate in this, the final season, when those of us who’ve never been let down by this grand guignol sex cartoon should be able to appreciate the last batch of episodes in a safe zone. You know? Let’s get as intimate in here as the citizens of Bon Temps during a pukey vampire invasion.

When it first began, True Blood enjoyed a few years in the watercooler zeitgeist only to face wave upon wave of backlash in subsequent seasons. Because backlash is almost always a delayed reaction, those who loathed the very strong season six were probably actually just mad about the comparatively weak season five. And those who were mad at season four were most likely just nursing a grudge against the show for dismantling whatever romance they’d been shipping. (Such is the tyranny of the shipper.) But if you’ve ever thought True Blood was a romance you were doing it wrong all along. From the moment Sookie threw an enchanted chain around a guy’s neck in the pilot, or when a dog turned into Sam Merlotte, or when Bill Compton crawled up out of a grave and sexed Sookie Stackhouse all over the graveyard, True Blood has been as open about its absurdity as possible. This was never the story of a love triangle. This was always an exercise in straight-faced Southern insanity. And it’s especially sweet to report that this week one of TV’s best shows returned with what might have been its strongest season premiere ever. 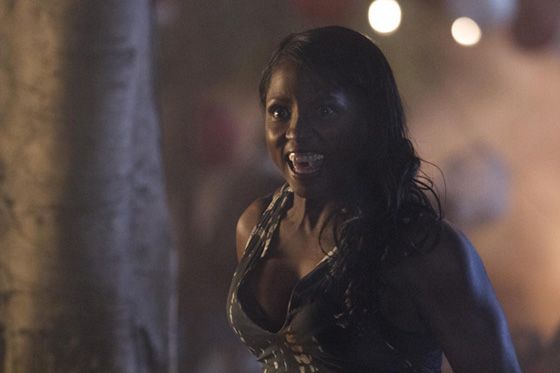 So, right up front: Were you prepared for how dark and serious season seven might be? Because the season premiere was very dark and very serious! True Blood has never lacked for audacity, but the sudden gravity that’s descended onto Bon Temps may be one of its most shocking turn of events yet. Even the show’s broadest caricatures — like Lettie Mae or Andy Bellefleur — were suddenly grounded and tragic in ways we wouldn’t have expected. Whereas past seasons looked to bigger and more powerful threats — an even older vampire! Even higher ranked vampire bureaucrats! — this season returns all our characters to their cricket-soundtracked living rooms for tense confrontations about death itself. Past seasons have been about largesse, but this one promises intimacy. The notable lack of levity might be considered a betrayal of the True Blood mission statement I just defended, but seven seasons in we’re ready to see these characters — characters we’ve known and (mostly) loved for a long time — face dark times. Not to compare this show to The Deathly Hallows, but yeah, maybe I will. “Jesus Gonna Be Here” was like Harry and Hermione slow-dancing to Nick Cave in a tent all alone in the world. In other words: For whatever fun and colorful origins it had, True Blood has now earned the privilege of quiet sadness. And it’s a straight-up thrill to behold.

As the season six finale promised, the human-vampire mixer at Bellefleur’s Diner (formerly Merlotte’s) did NOT go well. For one thing, even if a horde of vampires are oozing from the face and dying of Hep-V, that doesn’t mean they can’t zip around a barbeque at super-speed murdering townsfolk and abducting others. In one of the darkest, most breathlessly terrifying sequences in True Blood history, utter mayhem unfolded and in the process Holly, Arlene, and Nicole were carried away. Worse, after trying to save her mother from an attacker, Tara was MURDERED. The True Death! Well, this is debatable, since it happened off screen and her mother is not a reliable witness. Oh and Rutina Wesley is still listed as a series regular, but still. Regardless of whether Tara’s actually dead or not, her death cast a pall over the episode that nobody really recovered from. 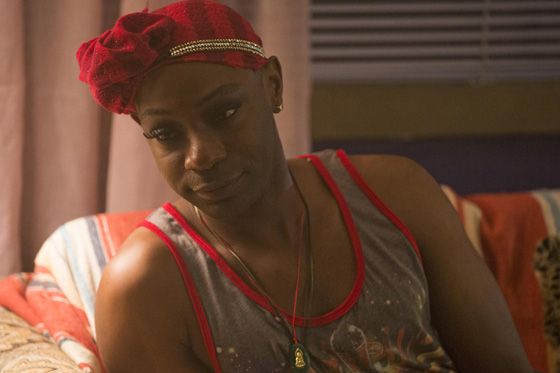 From there, True Blood paired off its characters into their customary separate threads and some of those scenes felt like nothing so much as cut scenes from Tennessee Williams plays. Florid, maybe, but devastating, very. In particular I loved Lafayette’s scene with his new vampire protector James. Though the actor had been distractingly recast with The Originals’ Nathan Parsons, the conversation was perfect True Blood: James recounted the time he’d been beaten nearly to death by the father of his best friend after the friend had been killed in Vietnam, but heavily implied it had been because he and the friend had been lovers. Let’s not forget how integral gay themes have been to this show since its inception, so this quiet moment between James and Lafayette felt both true to the show and dramatically compelling in the simplest terms.

Another big throwback element was Sookie’s renewed torment caused by her telepathic abilities. After the mixer massacre, she detected that most of the town felt she was responsible (including, sadly, her boyfriend Alcide). After a tense kitchen confrontation, she and Alcide argued about the difference between casual thought and actual beliefs and it was the first time in a while Alcide’s felt integral to the show. When they later made up and nakedly spooned and then did sex to each other, this was True Blood’s acknowledgement that yes, we will get to see naked people, but this time it’ll come coupled with actual dramatic weight. Same goes for Jason and Violet’s car-hood sex scene. Yes, a naked Jason Stackhouse has not lost its power to delight, but in this case it came only after a heated debate with Violet about when and under what circumstances she’d finally sleep with him. Turns out it only took him having to boss her around for her to finally get in the mood. I’m still not sure I understand the Violet character — their relationship remains one of the weirder and more troubling relationships in the show’s history — but it’s certainly not boring or simplistic. 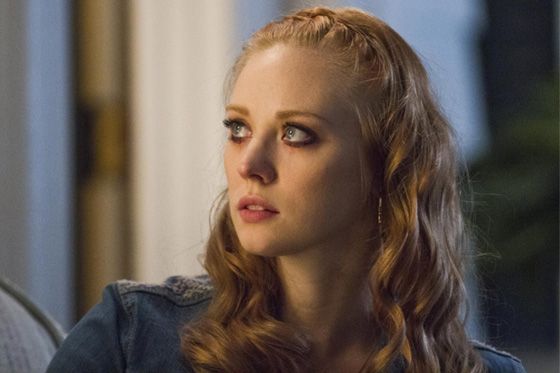 One of the more frightening plotlines belonged to Jessica, of all people, whose guilt-ridden insistence on protecting Adilyn (the only Bellefleur faerie Jessica never ate) resulted in a moonlight standoff with an infected vampire. The deserted-country-house imagery, plus repeated shots of Adilyn staring frightened out the window recalled the tense beauty of Halloween, but again, True Blood doubled down on emotion as Adilyn decided to trust Jessica and save her life from a rising sun. Like most of the rest of the episode, the stakes here were clear and moving, and required no more special effects than the two actresses’ natural abilities to convey emotion. Similarly, Bill Compton and Andy Bellefleur’s reluctant team-up to find missing townsfolk (who, we’d later learn, were being kept in the Fangtasia basement) bore dramatic fireworks out of the simple dynamic of two troubled men glaring at each other in the dark. That Andy Bellefleur, once a tiresome Foghorn Leghorn parody, is now a Charles Bronson-esque bad-ass and one of the show’s most sympathetic characters, is by far one of True Blood’s biggest late-game achievements.

And then there was Pam! Oh, gosh, guys. The best character on the show had maybe the best scene of the episode. Pam’s off in Marrakesh looking for Eric, and even her propensity for scene-stealing one-liners was toned down so that her essential pathos could shine. We first saw her winning a bizarre Russian Roulette situation with another vampire after coolly enduring his speech about how death doesn’t matter. In seasons past it would’ve been Pam who might have talked like that — or at the very least she would’ve looked down at his splattered remains and said something truly hilarious. But Pam just looked weary here, and her newfound humanity continued to show when she declined to drink a child’s blood (in Morocco the only humans with “clean blood” are children). As if you needed another example of True Blood’s sudden gravitas, it’s Pam’s sober, singleminded intention to find her maker that could be the thesis statement. I’m not positive I want to see a show where Pam isn’t hilarious, but again, these are characters we’ve known and loved for so long and it’s very refreshing to see the show treat them as something more complex than cartoons. 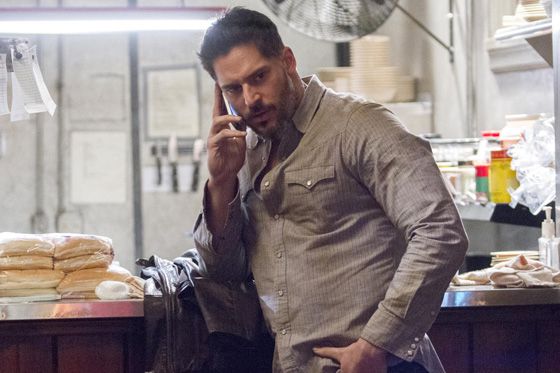 True Blood needs nobody to defend it. Over the years it’s had its share of Chris Farley moments where it would throw itself on the coffee table for our amusement; but much like that anything-for-a-laugh legend, the show’s always been smarter than most people give it credit for. And now, finally, the show can defend itself. In other words: Very yes, True Blood. Seven seasons in, this sexy old jalopy’s still got it. This season premiere was very good. And sad, and poignant, and thrilling. We have a history with this show and these characters, and it turns out exploiting those feelings are all it takes for this show to thrill us anew. Let’s do this.

overnights 16 mins ago
The Real Housewives of Miami Recap: Wrong Answers Only Three riveting housewives fights in a single episode? Simply iconic.
let her cook 7:38 p.m.
The Bear’s Ayo Edebiri Is Joining Phase Five of the MCU She’ll serve us a new role in Marvel’s Thunderbolts.
#freebritney 6:01 p.m.
Britney Spears Says Her Fans ‘Went a Little Too Far’ With Wellness Check Addressing fans who were concerned when she deleted her Instagram.
overnights 6:00 p.m.
Poker Face Recap: You Can’t Un-murder Someone Doxxxology’s got a killer new song.
yesterday on daytime 5:44 p.m.
Who Cut the Cheese on The View? No, it wasn’t Meghan McCain.
rap music on trial 4:55 p.m.
Everything We Know About YSL’s RICO Case District Attorney Fani Willis was once on the same side as a YSL member, representing Mondo in a 2019 case.
tv review 4:47 p.m.
Shrinking Desperately Wants You to Like It The new Apple TV+ comedy starring Jason Segel and Harrison Ford is as needy as its protagonist.
ow 4:38 p.m.
Bravo Also Investigated Heather Gay’s Black Eye “I don’t know what happened,” Gay said at the reunion.
legendaddy 4:05 p.m.
Rauw Alejandro and Daddy Yankee Are Dropping ‘Panties y Brasieres’ The secret menu item on Saturno.
buffering 3:47 p.m.
What Netflix’s Bela Bajaria Era Means for Hollywood “She needs to keep programming things people watch versus snobby s- - - people don’t.”
it's a party! 2:30 p.m.
NBC Is Throwing Carol Burnett a Giant 90th Birthday Bash Featuring music and comedy from Amy Poehler, Steve Carell, Bernadette Peters, and more.
buzz buzz 2:26 p.m.
How to Support the Yellowjackets and the Suit Jackets at the Same Time Succession and Yellowjackets airing at the same time doesn’t have to ruin your life.
snl 1:21 p.m.
Pedro Pascal and Coldplay to Team Up on SNL The star of HBO’s The Last of Us will make his hosting debut.
trailer mix 12:48 p.m.
Tom Wambsgans Thinks the Roy Conflict Is ‘Like Israel-Palestine, But Harder’ War (against his wife) begins March 26.
emergency discussion 12:06 p.m.
Velma and the Case of the Condescending Reboot Three new TV revamps of varying quality offer a lesson in how to wield nostalgia responsibly.
vulture 10x10 12:01 p.m.
The High-Stakes Puzzle 24-Across, Three Letters: One of the Volturi in Twilight.
overnights 12:00 p.m.
Poker Face Recap: Little Miss Galahad Despite the Columbo inspiration, Charlie is a drifter with a strange power, not a detective with any jurisdiction.
let gay reality tv bomb 11:14 a.m.
Real Friends of WeHo Made Drag Race Fans ‘Look Over There!’ Nielsen reports the Real Friends premiere managed to hold on to just 29 percent of Drag Race’s viewership.
coming soon 11:00 a.m.
Save the Date for Party Down Season 3 Soup R’ Crackers? In this climate?
pisces son or aries daughter? 10:55 a.m.
Keke Palmer Discloses Her Baby’s Possible Star Signs on Fallon While casually revealing the baby’s sex.
More Stories