Tom Cruise’s Edge of Tomorrow got smoked at the American box office over the weekend, finishing in third place behind The Fault in Our Stars and the week-old Maleficent. But even though the thing reportedly cost $178 million to make and earned only a measly $29 million in the U.S., it’s no failure — because when you factor in foreign grosses, it’s already made $140 million and should turn a profit shortly. It was the weekend’s top-grossing movie worldwide because international audiences love Cruise, even if, since he jumped on Oprah’s couch and blasted Brooke Shields’s Paxil prescription, domestic ones have been lukewarm. But which country loves him the most? We crunched the numbers for his last ten starring roles (Collateral, War of the Worlds, Mission: Impossible III, Valkyrie, Knight & Day, Mission: Impossible — Ghost Protocol, Rock of Ages, Jack Reacher, Oblivion, and Edge of Tomorrow) and — assuming you’re not stuck in a time loop that lets you see the future — the answer may surprise you.

Believe it or not, the U.S. is still the country that spends the most total on Tom Cruise movies — over $1 billion since 2004’s Collateral. But that doesn’t tell the whole story. 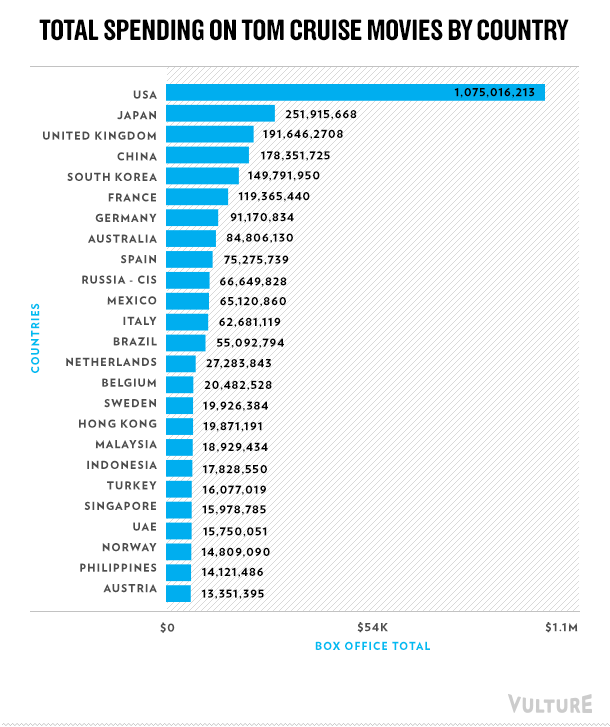 More and more of Cruise’s grosses are coming from outside of the U.S., where, to most people, the weirdest thing about him is that he’s not morbidly obese like other Americans. Here are his most recent ten movies, ranked by the percentage of their grosses that came from foreign audiences. International moviegoers even liked Knight & Day! 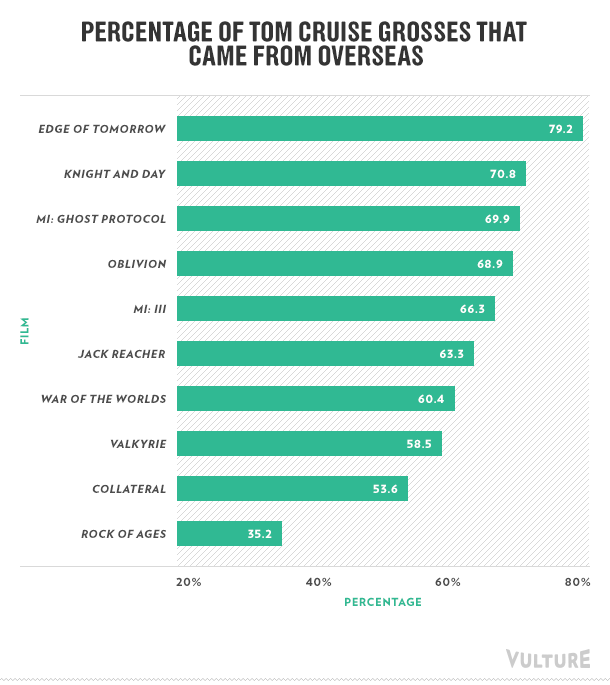 But who likes Cruise the most? Yes, the U.S. spends the most total on his movies, but there are 313.9 million people here and not all of them are pulling their weight. (How many times did you see Valkyrie in the theater?) For the true measure of a country’s devotion, we need to look at amount spent per person on tickets to see Cruise’s movies. So we divided the grosses for each country by population and a clear winner emerged: Iceland (population: 320,137), where the average citizen has spent a whopping $4.77 on Cruise movies since 2004. Cruise recently filmed Oblivion there, so maybe he just knows everyone personally. 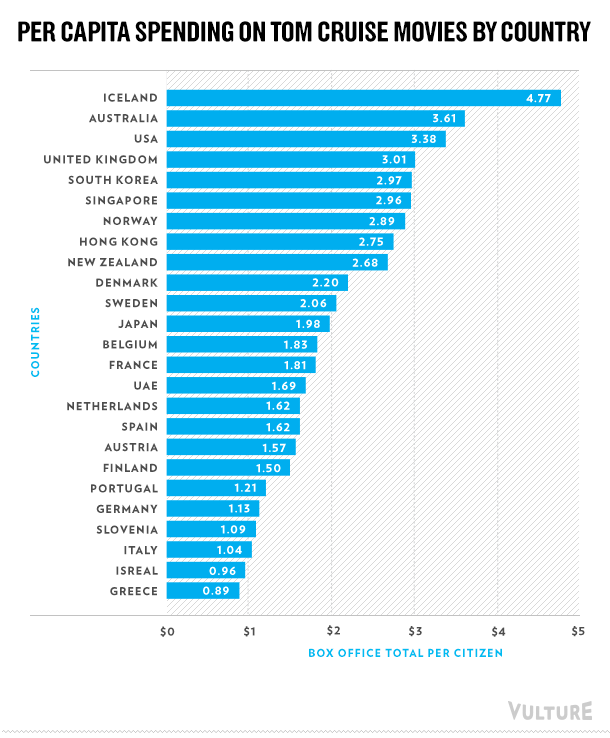 Which Cruise movies did Iceland like best? Here, his most recent ten films, ranked by how much they made there. Even in Iceland, Rock of Ages was a tough sell. 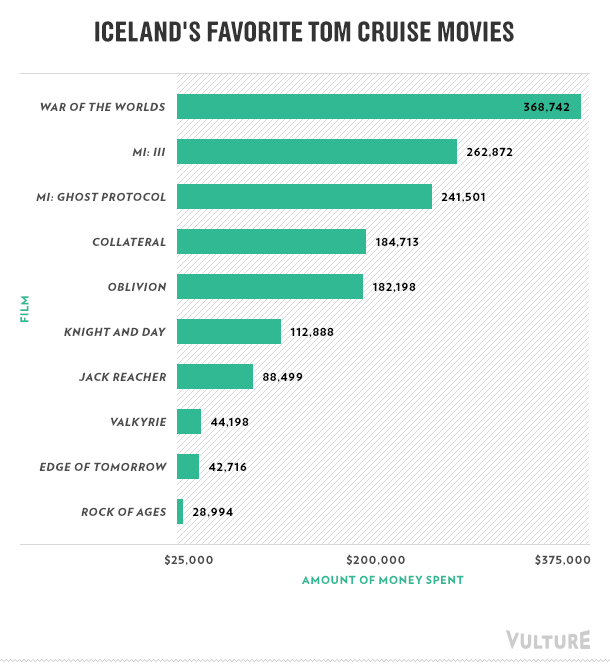 +Comments Leave a Comment
Which Country Loves Tom Cruise the Most?

superlatives 16 mins ago
The Loudest and Wittiest of Def Leppard, According to Joe Elliott “We were young enough to enjoy it without killing ourselves.”
By Devon Ivie
let's do it again 16 mins ago
Come Watch a Sequel in the Park With Us Bryant Park Movie Nights are back this summer.
solidarity forever 2:05 a.m.
Activision Blizzard Employees Win Vote to Form Company’s First Union On the same day that federal labor officials alleged that the gaming company illegally threatened staff.
no thank you Yesterday at 11:00 p.m.
Riley Keough Says She Didn’t Want to Star in Baz Luhrmann’s Elvis You know, the biopic about her grandpa.
overnights Yesterday at 10:11 p.m.
Better Call Saul Mid-Season Finale Recap: The Beginning of the End Better Call Saul conned us just as brilliantly as Kim and Jimmy conned Howard.
overnights Yesterday at 10:00 p.m.
We Own This City Recap: No Honor Among Thieves These guys cannot turn on each other fast enough.
overnights Yesterday at 9:30 p.m.
Below Deck Sailing Yacht Recap: Sequins and Wigs Gary’s need to flirt continues to cause chaos on the Parsifal III.
work wife Yesterday at 9:05 p.m.
Jason Momoa Apparently Pushed for Amber Heard to Keep Her Aquaman 2 Role According to expert testimony in Johnny Depp’s defamation trial.
overnights Yesterday at 9:00 p.m.
For All Mankind Recap: A Fine Romance Trope For All Mankind gets jam-packed with tropes from romance novels. Who knows if it was intentional, but it works.
extremely online Yesterday at 6:26 p.m.
Halsey Goes Viral in an Attempt to Avoid Going ‘Fake’ Viral on TikTok Claiming their label won’t let them release a new song yet.
exes Yesterday at 5:46 p.m.
Kate Moss Will Testify Wednesday in Johnny Depp’s Trial Depp’s team is also planning on calling him back to the stand later this week as a rebuttal witness.
the law Yesterday at 5:19 p.m.
Gunna Denied Bond for Gang Charge, Trial Set for January The rapper’s attorneys denied he would be a risk for witness intimidation.
endings Yesterday at 3:00 p.m.
The Empty Symbolism of Men’s Ending Alex Garland’s Men is laden with symbolism, much of it provocative and highly gendered. But what does it all add up to?
By Katie Rife
manchester's finest Yesterday at 2:13 p.m.
Liam Gallagher Hops Aboard His Own ‘Magic Bus’ His maraca-infused track, “World’s in Need,” was inspired by the Who.
cannes 2022 Yesterday at 1:01 p.m.
The ‘Eat the Rich’ Comedy Making Cannes Say ‘Blech!’ In Triangle of Sadness, Ruben Östlund rubs audiences’ noses in shit. They love him for it.
By Nate Jones
decisions decisions Yesterday at 12:15 p.m.
Everything to Consider When Making a Comedy Special Special Aside from what jokes to tell.
By Kathryn VanArendonk
vulture 10x10 Yesterday at 12:00 p.m.
The Hazza Puzzle 33-Across, Five Letters: Hitchcock role in a Hitchcock film, e.g.
beginning times fun Yesterday at 12:00 p.m.
The Special Special Stand-up isn’t just getting prettier onscreen. It’s growing up as a distinct art form.
By Jesse David Fox
vulture lists Yesterday at 12:00 p.m.
Every Lady Gaga Song, Ranked Here’s where Love For Sale and “Holy My Hand” land on the all-time list.
By R.S. He
vulture lists Yesterday at 11:00 a.m.
The Cast of Downton Abbey’s Most Un-Downton TV and Movie Roles Michelle Dockery as a prosecutor, Lily James as Pamela Anderson, and much more.
More Stories