Baby Boom, produced by Nancy Meyers and released in 1987, was a Zeitgeist-y look at the working woman’s quest to have it all. But in many ways, the movie still feels fresh. Diane Keaton plays J.C. Wiatt, a.k.a. the Tiger Lady, a management consultant with an unflappable exterior whose career ambitions are severely disrupted when she inherits a baby from a distant relative. (Yes, you can inherit a baby.) She’s not expecting the baby, and thus: High jinks ensue. But it’s not all fun and games: The now-single mother has to make tough decisions on how she wants to live her life, making Baby Boom a groundbreaking film about modern-day female lives. While the topic is now a part of the cultural conversation, it’s easy to forget that this was still a provocative subject 27 years ago! And it’s no surprise that Keaton was involved in helping bring it to the mainstream. Here’s how:

She’s a no-nonsense, ball-busting career woman …
Wiatt, a ruthless management consultant, is clearly a progenitor of The Devil Wears Prada’s Miranda Priestly and tough-as-nails attorney Patty Hughes from Damages. We first see her striding through the carpeted hallways of her fancy Manhattan office building, barking orders about P&Ls (profit-and-loss statements) and bullying her assistant from the comfort of her corner office. But even as she blusters, Diane Keaton manages to portray Wiatt as more than an all-business, no-pleasure careerist. Not that it matters! She’s the boss.

… who isn’t afraid of a power suit.
Before we had Ally McBeal’s hemlines and Miranda Hobbes’s blazers, there was Diane Keaton and her menswear-inspired, sharp-shouldered, nipped-waist, business-professional attire. It was that era when the easiest way to convey strength through your sartorial choices was with a shoulder so broad that you had trouble making it through the door. You’d see many more like hers on women in the following year’s Working Girl, on The X-Files’ Dana Scully, and, more recently, on our former secretary of state, Hillary Clinton. Bow down: 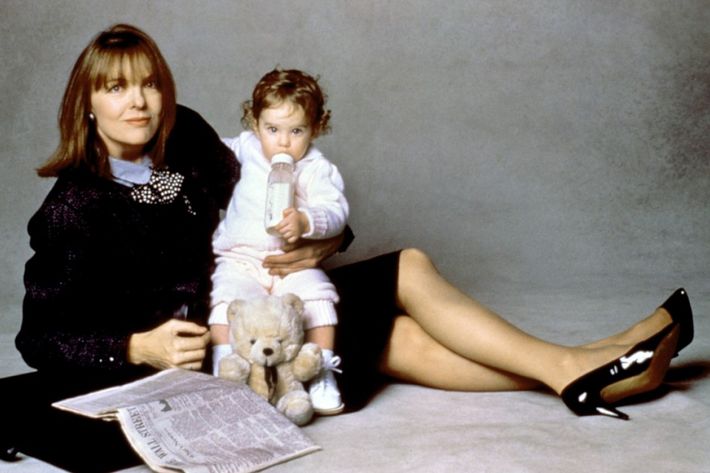 When she inherits the baby, she’s not immediately an amazing parent.
It’s hard to imagine any woman being adequately prepared for first-time parenthood, especially if that role were unceremoniously thrust upon her. When Wiatt is presented with baby Elizabeth, she and yuppie boyfriend Stephen (played by Harold Ramis) immediately make her a lovely linguini à la vodka and can’t seem to figure out the whole diaper thing. Similar new-parent issues happen to the baffled male title characters in Three Men and a Baby (which appeared just one month after Baby Boom) and Kirstie Alley’s white-collar single mother two years later in Look Who’s Talking, but more recent relatives tackling questions about how unplanned parenthood may alter a woman’s career path and throw a working girl for a loop can be found in Raising Helen and Knocked Up. Bottom line: We aren’t wired for parenthood! It’s a process.

She’s not afraid to tackle it all solo.
When it’s clear that the baby she inherits isn’t going anywhere, her uptight investment-banker boyfriend retreats as soon as he can, leaving J.C. with the kid. (A pretty lame move on his part!) After she can’t quite bring herself to put Elizabeth up for adoption, the two ladies become a makeshift family. When she’s unable to maintain a balance between dealing with the 2-year-old and an extremely demanding career, she chooses Elizabeth. Here’s how we know: At an important meeting, J.C. takes a call in the middle of a presentation, crooning “The Itsy-Bitsy Spider” to her daughter on speakerphone. While that trope has become shorthand in lesser movies about working women trying to balance new motherhood — such as in 2011’s I Don’t Know How She Does It (see the trailer below), in which Sarah Jessica Parker’s high-powered investment banker shows up to business meetings with pancake batter on her jacket and lice in her hair — it works in Baby Boom not only because it wasn’t a tired gag back then, but because, come on, it’s Diane Keaton singing “The Itsy-Bitsy Spider” while wearing a power suit.

She chooses her kid, but doesn’t give up her big business dream.
After realizing that juggling life and work in the big city isn’t working, J.C. does what any logical human being would do: She sells her apartment, buys a car, and moves to the boonies. While that might seem farfetched, the important part is that she doesn’t let the major career sacrifice sway her from achieving her goals, as she starts her own small business. (If you’ve ever wondered where the artisanal organic craze came from, it’s Diane Keaton’s very successful baby-food business in Baby Boom.) In the process, she snags the town’s hunky veterinarian and ditches the shoulder pads. Success! 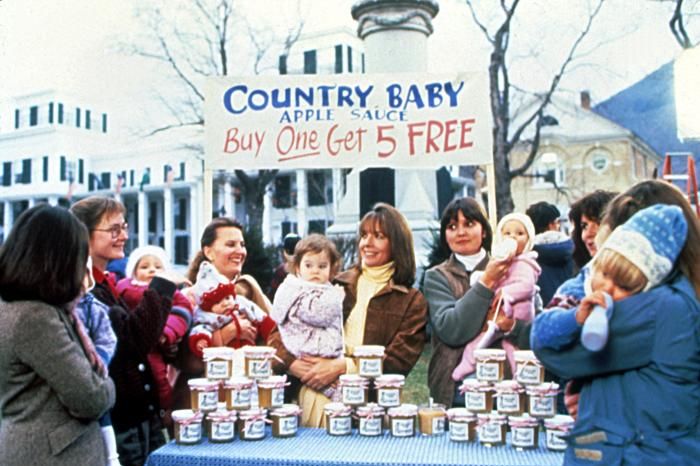 housewives institute bulletin 7 mins ago
The Ultimate Real Housewives Trivia Quiz Brought to you by the esteemed members of the Housewives Institute. How many can you get right?
overnights 7 mins ago
A League of Their Own Recap: The Crab Boil Casey “Dove” Porter is no Jimmy Dugan.
vulture 10x10 7 mins ago
The Brooklyn Puzzle 21-Across, Eight Letters: Magic Mike performance.
what we know 10 mins ago
Salman Rushdie Violently Attacked on Stage An assailant charged the famed author at an event in Chautauqua, New York on Friday morning. Rushdie’s condition is not yet clear.
the theater 25 mins ago
Broadway’s Into the Woods Announces Power-Couple Casting Stephanie J. Block and Sebastian Arcelus, real-life husband and wife, will step into the lead roles.
this week in late night 27 mins ago
Kaitlin Olson Roasting Her Husband Won Late Night This Week Plus Megan Thee Stallion’s dog stealing the show and money lover Mindy Kaling.
now streaming 11:33 a.m.
The 7 Best Movies and TV Shows to Watch This Weekend Including A League of Their Own, but gayer this time!
overnights 11:09 a.m.
Never Have I Ever Recap: Trollhunter It’s admirable of Never Have I Ever to navigate the gray areas of the Paxton/Devi/Haley dynamic.
departures 10:49 a.m.
Jon Batiste Leaving Late Show for His True Calling: Winning More Grammys Interim bandleader Louis Cato will take over fully.
overnights 10:23 a.m.
For All Mankind Season-Finale Recap: All My Good Dumplings Another big-swing finale does a nice job making some concluding remarks on what unites these precious (and in one case, literal) space babies.
overnights 9:50 a.m.
Never Have I Ever Season-Premiere Recap: The Odd Couple The gossip and pressure of being the school’s hottest and unlikeliest couple get to Devi.
overnights 9:45 a.m.
A League of Their Own Series-Premiere Recap: Play Ball Batter up! Hear that call! The time has come for one and all…
collabs 9:13 a.m.
Beyoncé Is the Girl to Make Ronald Isley & the Isley Brothers Say It Again Listen to their new duet of the 1975 hit “Make Me Say It Again, Girl.”
movie review 9:00 a.m.
Emily the Criminal Isn’t Interested in Empathy Aubrey Plaza is great as a woman caught between crushing loans and a felony record who embarks on a surprisingly gritty criminal side hustle.
By Alison Willmore
role call 8:46 a.m.
Kate Bosworth Answers Every Question We Have About Blue Crush On competing for the lead role with Jessica Biel, eating sand during her audition, and surviving the “cruel” streak of the early 2000s.
By Ilana Kaplan
qu'est-ce que c'est? 8:00 a.m.
When Wet Leg Met Wet Leg Superfan David Byrne The breakout indie-rock duo and former Talking Heads frontman discuss the perils of fame, the genius of “Psycho Killer,” and being specks of dust.
the grub street diet 6:00 a.m.
L Morgan Lee Searches for the Joy in Dinner “I had my first bite and felt my spirit start to stir.”
By Zach Schiffman
last night on late night 12:59 a.m.
Watch Megan Thee Stallion Write Some Thank-You Notes With Jimmy Fallon As part of her guest hosting gig on The Tonight Show.
my single is dropping 12:21 a.m.
Nicki Minaj’s New TikTok-Fave Single, ‘Super Freaky Girl,’ Is Out She’s all right.
new music friday 12:01 a.m.
Megan Thee Stallion Drops Traumazine Early As a ‘Plan B’ No complaints here.
More Stories