Though Cameron Diaz almost seems to be picking projects at random these days, there is at least one consistent through line: Whether the movies do well (like her spring sleeper The Other Woman) or arrive at the box office dead on arrival (like this weekend’s flop Sex Tape), you can always, always count on them to earn bad reviews. When it comes to consecutive critical duds, in fact, Diaz may be doing worse than any other A-lister. Just check out her recent Rotten Tomatoes résumé, encompassing almost a full decade of work: 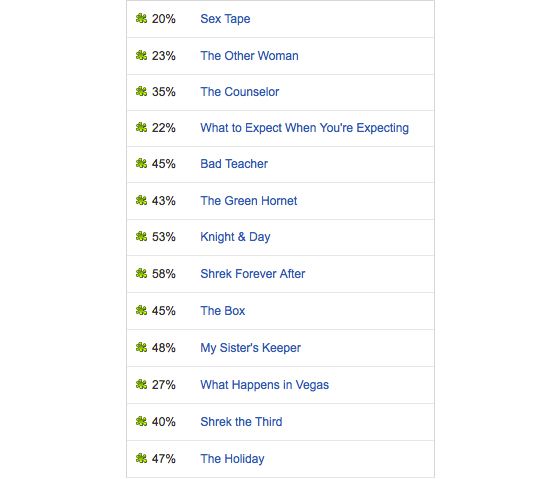 And yet! Despite all those duds, Cameron Diaz is sunny and charming enough to remain a movie star, and she’s awfully good at being a celebrity, too. “She’s a gorgeous and fearless physical comedienne — and there are so few of them,” said one top agent we spoke to three years ago, when Diaz underwent a Star Market audit. Still, her relative lack of competition is no reason for Diaz to slack off. If she keeps making bad movies, Hollywood will start losing interest in her long before audiences do. Here are three ways she could turn things around.

Take some cues from Sandra Bullock.

Much like Cammy D, Sandy B once seemed determined to squander her goodwill with an endless series of poorly chosen projects. In the 13 years that passed in between 1996’s A Time to Kill and 2009’s The Blind Side, Sandra Bullock only appeared in two live-action movies that got a fresh rating on Rotten Tomatoes, and she played a supporting role in both: Best Picture winner Crash and little-seen Truman Capote biopic Infamous. For most of her career, Bullock appeared in one forgettable flick after another. In Love and War? Gun Shy? Premonition? In short, it was a world of no.

That all changed when The Blind Side hit big at the box office and won Bullock an out-of-nowhere Oscar. Finally, the once-indiscriminate actress became careful and choosy. Bullock took a few years off and turned down project after project until another Best Picture nominee, Extremely Loud and Incredibly Close, came along, and after that, she made two more savvy choices, signing on for last summer’s The Heat (which delivered her best opening weekend ever at the time) and starring in Gravity, an Oscar-winning smash that’s become her biggest blockbuster yet.

Diaz hasn’t quite had a Blind Side–type hit to leverage in that fashion, but she should be on the hunt for a similar vehicle that can take advantage of her appealing star persona and use it in the service of a more dramatic, emotional story that will connect with wider audiences. Assuming she can secure that breakthrough, let’s hope Diaz then knows how to hang back. She doesn’t need to take every comedy offered to her; like Bullock, who signed on to The Heat with a savvy director (Paul Feig) and hot co-star (Melissa McCarthy) attached, Diaz should only make another comedy if she can secure A-level collaborators. (This means no more movies where you’re acting opposite Kate Upton and Matthew Morrison, Cameron.)

Do a memorable TV arc.

Diaz is the epitome of a California girl, and guess where True Detective is set this season? She’d be smart to lobby for the female lead, or to take an arc on any tastemaker show that could let her actually act for a prolonged period of time. Auteurs and casting directors may be skipping her movies like Sex Tape and What Happens in Vegas, but they’re definitely watching HBO, Showtime, and FX. If Diaz did a wild three-episode arc on American Horror Story or showed up for a gentle guest-spot on Louie, she could get the kind of didn’t-know-you-had-it-in-you jolt that would put her back on the map for hot film directors like David O. Russell.

The interesting thing about Cameron Diaz is that she almost seemed to reject her movie stardom at first. After hitting it big in her movie debut with The Mask in 1994, Diaz made way more indies than she did studio movies, and she spent the bulk of the ‘90s starring in small films like Being John Malkovich, The Last Supper, She’s the One, and Very Bad Things. Occasionally she’d sign onto a bigger project, but even at the studio level, she was working with A-list directors like Oliver Stone (Any Given Sunday) and Danny Boyle (A Life Less Ordinary).

Where has that Cameron Diaz gone? You can still see glimmers of her curiosity when she makes a film like Bad Teacher (which offers a more unsympathetic female protagonist than most studio films) or The Counselor (where she was miscast and redubbed), but those movies didn’t quite work. Diaz would be great in a Michel Gondry–directed indie, since he shares her contagious silliness, but unfortunately the two of them collaborated on The Green Hornet, where Diaz stands uncomfortably on the sidelines and is mocked by her co-star Seth Rogen for being old. And while it might have sounded like a good idea on paper to star in a remake of Gambit scripted by the Coen brothers, the Michael Hoffman–directed movie bombed abroad and was never even released theatrically in the United States.

If any one of those films had been a critical success, Cameron Diaz could fight the notion that she’s been coasting; since none of them were, she might actually be more tempted to stay within her big-studio comfort zone. That would be a mistake. “The business is tough on women getting to be her age,” said one top agent we spoke to for Diaz’s Star Market three years ago. Instead of seeking diminishing returns within the studio system, then, “I actually would put her back in some of the indie stuff she’d started out doing,” said the rep. “That could be the way back.” We’re not saying that Diaz has to lose her giant grin, but wouldn’t you rather see her in a Sundance comedy like The Kids Are All Right instead of another studio dud like Sex Tape? You may bristle and claim that Diaz doesn’t have the chops for it, but back in her Being John Malkovich days, no one would have quibbled. If she can get back to movies like that, she’ll find her reputation rightfully restored.