For those of us last remaining True Blood loyalists, season seven has felt like nothing so much as sneaking into an amusement park after hours. It’s dark, it’s scary, and it’d be nice if we had more friends here, but man, has this all-night joyride been exhilarating. This dark park is OURS, and we should maybe feel bad for anyone who got back on the charter bus too soon, you know? Because “Death Is Not the End” was probably the best True Blood episode of the entire series so far. I realize these are bold words, but just go ahead and deal with it, hater. This episode was apex True Blood. And that’s without male nudity.

Okay, I guess I should at least attempt to defend my argument here. First off, no season of True Blood has been more consistently coherent than this one.  Season seven has basically thrown its arms around the Bon Temps community and gathered everyone to its bosom. Whereas the (wildly uneven) first season boasted the thrill of discovery, season seven has the greater advantage of capitalizing on seven years of character development — or, more specifically, the development of our feelings toward these characters. In addition to this well-earned emotional intimacy, True Blood has also fashioned its final season as a sort of greatest hits of familiar faces. Hoyt, Alcide’s dad, Ginger, Terry, and the Magister all made appearances here; and the guest-star cavalcade will presumably continue for the remaining six episodes. Because rather than propel the final season into some insane endgame, True Blood is now more about looking backward and enriching past story lines that maybe felt slight at the time. We’re only four episodes in, and season seven has done more to cohere this community of characters than the first six seasons combined. 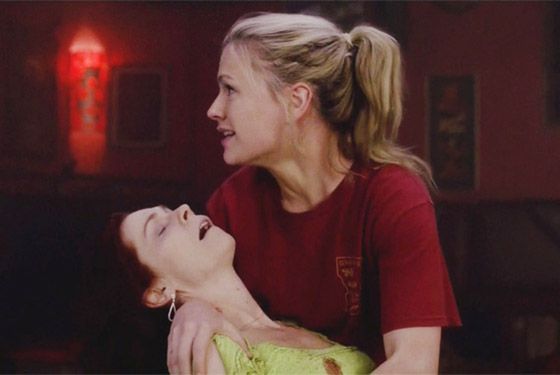 But beyond the very inspired conceptual elements of this final season, “Death Is Not the End” was just a straight-up fantastic episode on its own. The already-tight story lines — including some instantly iconic flashbacks — came together in the sort of unified climax True Blood usually reserves for a season finale. And sure, an insane massacre isn’t exactly novel on this show, but what was novel was how it came coupled with next-level pathos and a half-dozen scenes in which these characters lived and breathed and sobbed and nearly died in ways that rendered them more flesh and blood than they’ve ever been. Like Andy Bellefleur before her, Arlene has functioned as mostly a comic-relief outsider, and her past brushes with anguish have bordered on annoying in how broadly drawn they were. But here — as she lay dying in Fangtasia, talking to the ghost of Terry — I felt real pain for this woman. I didn’t want her to die, and when she didn’t, I felt actual relief. Same for the band of vampire heroes who’d just destroyed the entire Hep-V cell in the parking lot. Everything foreshadowed that another good guy was going to bite the dust during the melee, but when that didn’t happen, I was actually surprised and grateful. That will be the enduring legacy of True Blood’s endgame: It took this scary-sexy-ludicrous cartoon and made us care. 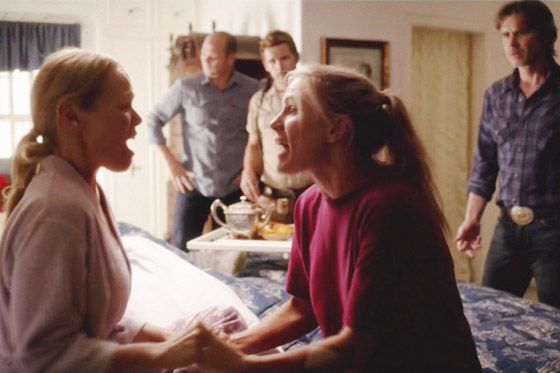 Oh, right, the episode. Okay, fine, let’s talk about this thing. The first item you need to know about “Death Is Not the End” is that Sookie was in rare form. Whether you love or loathe this character, her best mode is by far heroine-who-doesn’t-give-a-fuck. Something about seeing her boyfriend murdered in front of her made Sookie cut the shit and take care of business in this episode, and that ran the gamut from informing Alcide’s dad without sobbing to combing through Holly’s amnesiac brain for the whereabouts of the other captives to comforting Arlene’s kids to shaking Jessica out of her guilt-ridden blood-hunger-strike and heading up the assault on Fangtasia. While it’s fairly obvious Sookie probably wasn’t all that into Alcide, it made sense that she went all stone-cold after his death as though this were the final straw in the Grim Reaper’s full-on assault on her love life. But that didn’t mean Sookie wasn’t ready and willing to put her own life on the line to save the rest of her friends. Much like how Lars Von Trier’s Melancholia posited that a truly depressed person is the exact person you’d want to be around during end times, Sookie’s years of trauma suddenly positioned her as the town’s most qualified savior. 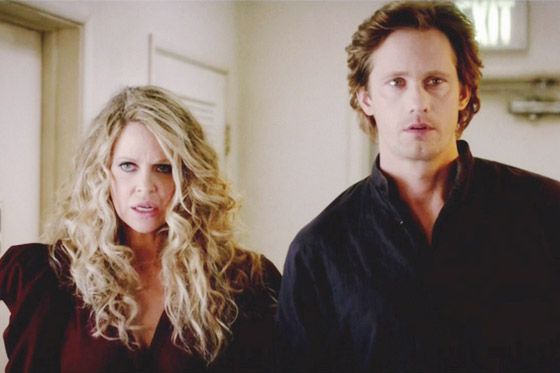 But if we’re being real, it was the Eric and Pam flashbacks that really elevated this episode to the next level. Last week I wasn’t totally sure why we needed to know about Eric’s early brush with the Authority (and the Yakuza?) except to beef up his screentime before his Hep-V infection really kicked into gear. Like, where to even begin with those flashbacks? The fact that Fangtasia used to be a crappy VHS store with a tunnel from the original Underground Railroad right beside the porno section? Or the part when Eric walked across the room to Garbage’s “#1 Crush”? Or when Ginger showed up in the ‘90s dressed like a Reality Bites extra? 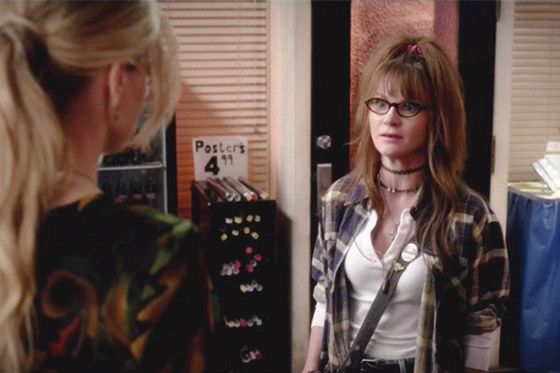 When Pam did this? 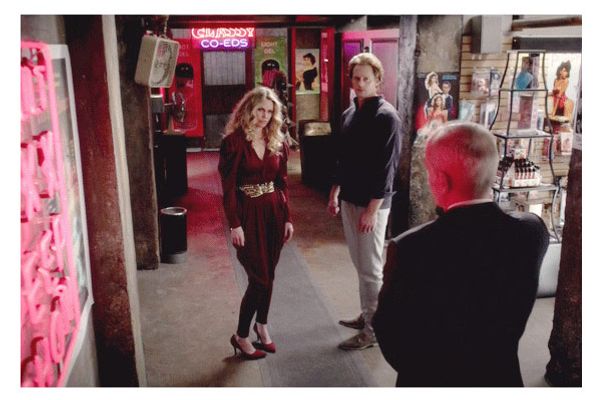 But this Fangtasia backstory summed up season seven pretty perfectly: major fan-service callbacks while also proving relevant to the current story. After Sookie had rounded up all the available healthy vampires of Bon Temps (including a reinvigorated Jessica, James, Violet, and Willa), the gang all converged in Shreveport and defeated the Hep-V vampires as well as a particularly inopportune mob of human vigilantes. (Bye forever, Kenya!) True Blood gets a lot of mileage out of supposedly bad vampires doing good things, so seeing Violet repeatedly fight on the side of our heroes remains a thrill, as does Pam’s willingness to get results for Sookie despite mostly despising her. But again, it all came down to Sookie convincing a nearly drained Arlene to hold onto her life that packed the biggest emotional punch. Aside from the surprisingly complicated life-or-death struggle rendered in visual terms, it also strongly hinted that maybe these characters really are living on in spectral form (per Terry’s seemingly real visitation, or Lettie Mae’s “hallucinations” of Tara from a few episodes back). Maybe don’t be surprised if ghosts become the final major supernatural creature to get their own True Blood season. 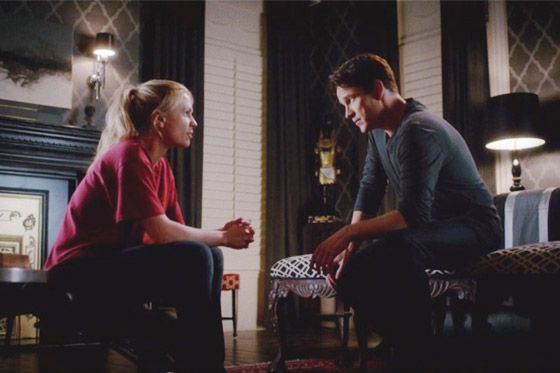 Because the End is what this season is all about. It wouldn’t take a TV cynic to predict that we’re heading for a Sookie-Bill romantic reunion, and that feeling was particularly stoked in this episode when Eric showed up on Bill’s doorstep and the old love triangle essentially resumed the pose. But between Bill sincerely telling Sookie that he owes her everything and Eric demonstrating actual human empathy for Sookie’s loss of Alcide, True Blood’s now digging a little deeper than a standard-issue surface-level love triangle. These characters have been through hell, and even if their love is no longer the kind of thing that could burn up a cover of TV Guide, just seeing these three navigate their feelings for one another still holds a crazy amount of resonance. 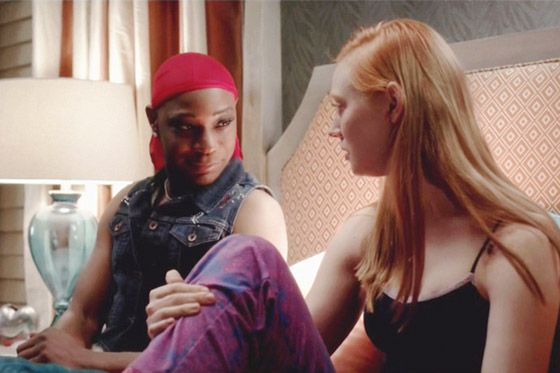 “Death Is Not the End” was not short on additional highlights. Lafayette’s speech to Jessica about carrying on living without forgetting the past was as meaningful as True Blood gets. Or the simple sight of Andy Bellefleur cradling Holly as she wept. Or a devastated Hoyt sitting on an oil rig and suddenly asking Jason whether they’d met before. There’s really no other show that could so handily switch between cartoon antics and actual, meaningful emotions (and there are even entire seasons of this show that maybe failed to do that), but True Blood’s been bringing that combo every week now in a big way. It honestly doesn’t matter how many people are still riding this roller coaster, just that we get to go on it again and again.