All good storytelling requires a few essential elements: compelling characters, a well-structured plot, memorable dialogue, and the Yakuza. To be honest, one can probably omit any of those first three options just as long as the Yakuza is in there, and this rule is especially true if the story involves wolfmen of any kind. As both The Wolverine and MTV’s Teen Wolf proved, wolfmen and the Yakuza go together like catamarans and luxury — you truly can’t have one without the other.

It’s frankly shocking it took True Blood nearly seven seasons to finally introduce the Yakuza, yet here we are. But these fearsome Japanese gangsters with swords didn’t arrive without a certain amount of irony: Just as the Yakuza entered, the show’s last remaining werewolf exited. That’s because Alcide fucking died. Somebody shot him right in the head! And the Yakuza was not even involved? Insanity. 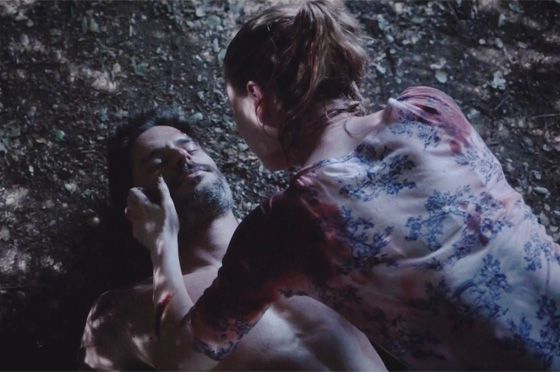 An episode like “Fire in the Hole” demands we start at the end. Specifically, with a naked Alcide, just lying there, dead. How did we get to that sad yet sexy end point? Well, Sookie’s grand scheme hinted at in last week’s episode ended up just being a plan to lure infected vampires out into the open so Bill could jump onto them from out of a tree. It was a perfect plan that had absolutely no drawbacks. Unfortunately, once Sookie cut open a vein and attracted a gang of infected vampires, her plan immediately went awry and Bill almost got murdered. But then an angry dog named Alcide ran up and bit the stake right out of the hand of Bill’s would-be killer, and meanwhile, a third faction that included Jason, Jessica, Andy, and Violet ran up and murdered all the infected vampires. Even so, there was still the matter of a FOURTH faction of humans running around with rifles and shooting at ALL monsters, so while Violet was helping Sookie clean black blood out of her face and hair, an unseen human went and murdered Alcide! 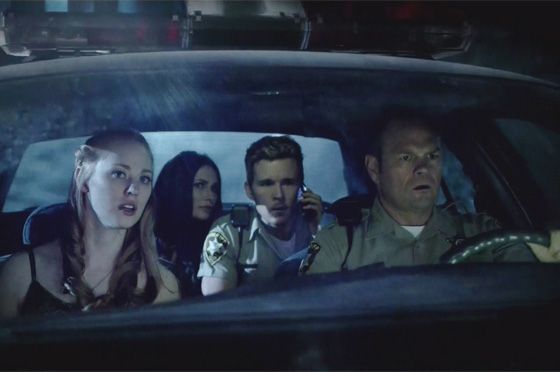 Okay, maybe we shouldn’t have started at the end — did any of that explanation make sense? Be honest. It all happened so fast. I like that True Blood tried to tie together several subplots into a grand finale (tying things together is not usually one of True Blood’s biggest priorities), but it meant that we were left with a royal rumble and a dead hunk. Poor Alcide! I mean, yeah, getting murdered was one of the more interesting things Alcide ever did on the show, but he was a decent guy and deserved a death that wasn’t quite so inglorious, you know? Because as far as True Blood’s big deaths go, Alcide’s was almost as disrespectful as Russell Edgington’s. But hey, at least he died doing what we loved him for best: being heroic and naked. 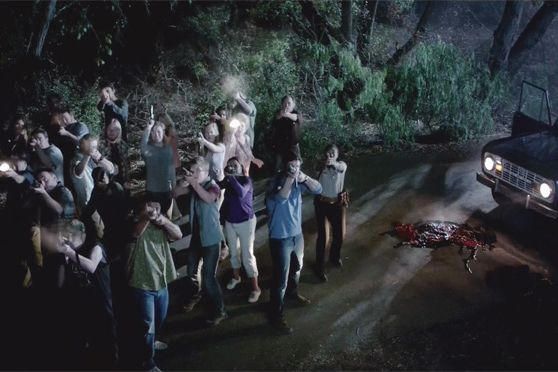 Despite the indignity of getting murdered by someone who’s essentially an extra, Alcide’s death wasn’t totally pointless. The banding together of human vigilantes poses a pretty big threat to our heroes (and Bon Temps in general) and thematically is very crucial to the True Blood mythology. The catalyst for this entire saga was the introduction of the Tru Blood beverage and the world’s uncomfortable acceptance of a maligned minority. Yet over the course of seven seasons, we’ve seen countless atrocities perpetuated by vampires against the human race. If there is any logic in this world — stay with me here — then it makes sense that the endgame of this entire series will be a final showdown between vampires and justifiably fed-up humans. Something tells me that battle might have casualties far more heartbreaking than Maxine Fortenberry getting her heart ripped out on a dark country road. (Good-bye forever, Hoyt’s mom!) 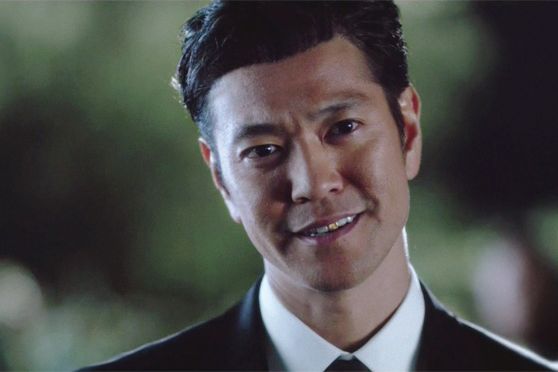 Alright, sorry, back to the Yakuza. The Yakuza are a plotline now. Or at least a band of Japanese gangsters affiliated with that one corporation that had developed Tru Blood and whose female leader was murdered with a high heel by Sarah Newlin last season. In a flashback plotline I maybe didn’t fully comprehend, Eric and Pam were visited by Nan Flanagan in France in the ‘80s (complete with amazing period costumes for the ladies and feathered hair for Eric) and were scolded for not “registering” as secret vampires or something. After refusing to help Nan and the Authority spread the word about the Tru Blood beverage, Pam and Eric were visited by the Yakuza, and Eric was terrorized into choosing whether his new French lover or Pam would be executed. He chose Pam, obviously, and then I guess he immediately forgot he was a vampire because he didn’t end up taking revenge right away? Come on, guy, you can FLY. Anyway, flash-forward 28 years and the same gold-toothed Yakuza guy was still at it, but this time he was hunting down an in-hiding Sarah Newlin. Because, oh yeah, Sarah Newlin is back! 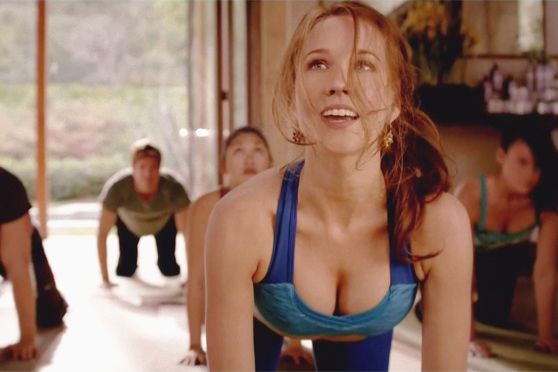 Sarah Newlin is more brunette and Buddhist than before, but she’s definitely back. Related: The fact that she’s still alive was the only thing that got present-day Eric out of his deathbed for one last adventure. He might have full-blown Hep V, but not even he could resist finishing off one of his mortal enemies. Unfortunately, it appears the Yakuza might just get her first. 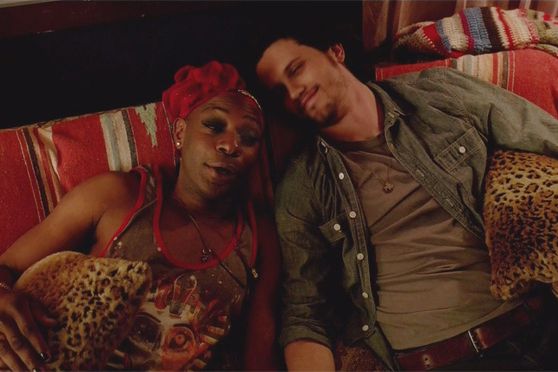 Aside from those truly thrilling turns of events, probably my favorite subplot, for sheer screentime-to-pleasure ratio, would be the scenes between Lafayette and James. In this case, the two characters had little to do except get really high and ratchet up their sexual tension to an unbearable degree. If we’re being honest, the Lafayette character has been criminally underserved for almost the entire run of the show, particularly when True Blood has tried to make him angsty. Nobody likes a mopey Lafayette. But in this episode, he’d turned his grief over Tara’s death into something approaching crazed jubilation, and it was extremely wonderful to watch him dancing around his apartment in full makeup and openly flirting with James. Just when the entire show threatened to become nonstop grim, we got Classic Lafayette back! (His method for mixing prescription drugs within his own bloodstream for James’s benefit was very amusing as well). While it’s obvious there’s some romance brewing between these two, this episode kept surprisingly coy about it, limiting things to James acknowledging his feelings before mumbling something about Jessica and leaving the apartment. Still, though: Sign me up for more of this plotline, definitely. 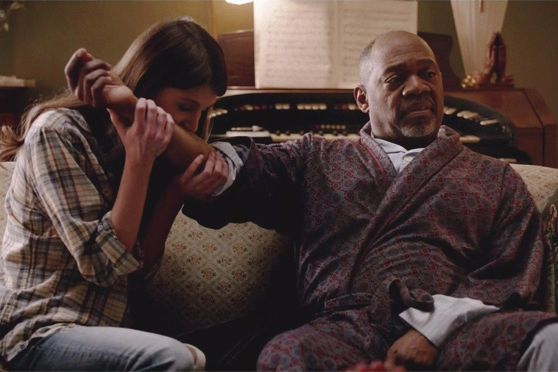 I wish the scene between the reverend and Willa was on that same level, but it wasn’t necessarily a waste of time, either. Sure, these are characters we don’t know super well, but I liked the reverend’s speech about why he’d married an ostensible monster (Lettie Mae), in addition to his eloquent explanation of addiction and why he needed to protect her from herself. Until this scene, all we’d known about him was he’d cheated on his wife and had driven a bit of a wedge between Lettie Mae and Tara, but this season has repainted him as being a very chill voice of reason amid the madness. Meanwhile, the increasingly dire circumstances in the Fangtasia basement continued this week as Holly was plucked out of the dungeon and used by the infected vampires as human bait. I think the idea was to make her roam around outside to ensnare good samaritans? She definitely led the vampires into Sookie’s “trap,” so at least she was able to get free. We’ll just have to wait and see what happens to the rest of the prisoners. (I was REALLY hoping Holly’s spell would somehow summon the protection of Marnie from season four, but oh, well.) 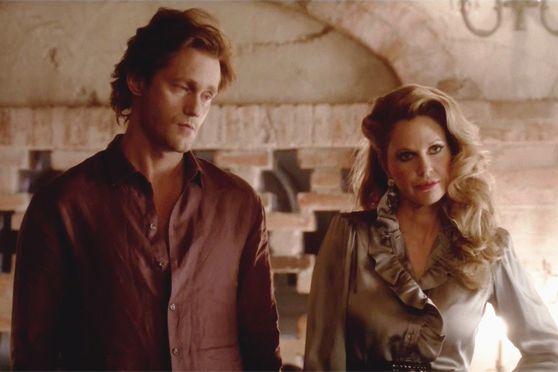 As midseason episodes go, this was a very midseason-y episode! Mostly just setup — until, of course, that final moment. And that final moment was a shocker. Alcide may not have been the series’ most important character story-line-wise, but Joe Manganiello has always been a visual thesis statement for True Blood’s cartoonish sexuality. That man-shaped pillar of riverstones WAS True Blood. Yakuza or no Yakuza, True Blood may not be quite the same without him. Rest in peace, you wonderful dog-hunk. 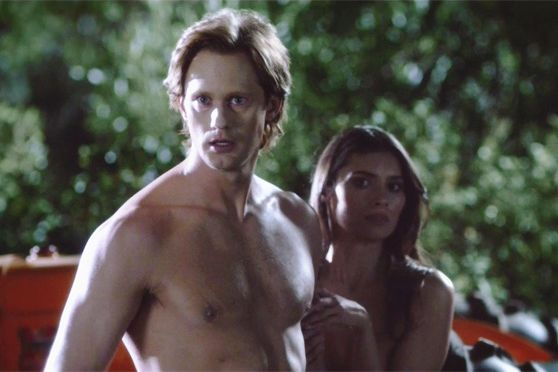 “Fire in the Hole” was fine, I liked it.

hard launch 21 mins ago
Paramount+ and Showtime Have Hard Launched Their Merger Paramount + Showtime - three shows = new service.
my singles are dropping 6:05 p.m.
Morgan Wallen’s Comeback Album Sounds Like a Big Mess Three songs from One Thing at a Time are out tonight.
the vulture spot 5:34 p.m.
Jonathan Majors Says Prepping for SNL Was Almost As Difficult As Bodybuilding  “Both were extremely physical, long hours, and I had to eat a lot.”
close read 4:58 p.m.
The Empty Sentiment of The Last of Us In imitating the rhythms of prestige TV, the video-game adaptation loses its emotional center.
By Jackson McHenry
the vulture spot 4:48 p.m.
Rotting in the Sun Features 30 to 600 Penises  Sebastián Silva and Jordan Firstman report back from a gay nude beach.
coming soon 2:59 p.m.
Michael Jackson’s Nephew Will Play Him in Antoine Fuqua’s Biopic From the producer of Bohemian Rhapsody.
cast away 1:59 p.m.
Netflix Gave Us More Than One Piece of Info About One Piece Get ready to munch on some devil fruit.
vulture 10x10 12:00 p.m.
The Unholy Puzzle 5-Across, Five Letters: M. Night Shyamalan film starring Samuel L. Jackson.
respect the classics 11:59 a.m.
The Rock and Roll Hall of Fame Is Just a Vibe Now The new eligibility requirements will honor artists whose “music connects us all.”
trailer mix 10:46 a.m.
Buddy-Comedy Duo Adam Sandler and Jennifer Aniston Are Back on the Case Murder Mystery 2 promises more murder and more mystery, even.
overnights 10:21 a.m.
The Real Housewives of Potomac Recap: Going Fishing What better time to air out some dirty laundry than when an exotic dancer is making it clap right in front of your lobster tail?
dylanology-ology 10:00 a.m.
A Beginner’s Guide to Bob Dylan’s Sprawling Bootleg Series Blowin’ through all 17 volumes the easy way.
trailer mix 9:55 a.m.
Star Trek: Picard Season 3 Looks Borg-eous The stakes are star high.
rip 9:55 a.m.
Annie Wersching, 24 and Last of Us Video-Game Star, Dead at 45 She also starred in Bosch and The Vampire Diaries﻿.
party report 8:00 a.m.
Jason Segel Is a Car Guy in Real Life and in Shrinking The Apple TV+ show’s vintage Bronco is inspired by the co-creator and star’s actual ride.
vulture picks 8:00 a.m.
25 Notable New Releases Over the Next Two Weeks The Grammys, You releases its fourth season, M. Night Shyamalan’s latest thriller, Shania Twain makes a comeback, and more.
By Vulture Editors
obits Yesterday at 11:36 p.m.
Lisa Loring, TV’s Original Wednesday Addams, Dead at 64 Jenna Ortega paid tribute to Loring in her viral dance scene in Wednesday.
overnights Yesterday at 10:20 p.m.
The Last of Us Recap: This Is You A very special episode explores what waits on the other side of survival.
backstories Yesterday at 10:15 p.m.
‘A Rosetta Stone for The Last of Us’ How two non-player characters and an unexpected love story elevated the HBO series beyond its source material.
By Nicholas Quah
overnights Yesterday at 10:01 p.m.
Mayfair Witches Recap: Death at a Funeral Here’s what we’re gonna do, gang. We’re gonna wipe Mayfair Witches’s slate clean and start fresh so we can pretend that this was the real pilot.
More Stories