Twin Peaks was a phenomenon, one whose impact far outlived its two seasons, and one whose resonance can’t be overstated. Well, unless you want to claim (as some have) that David Lynch and Mark Frost’s small-town murder-mystery-supernatural-suspense series was somehow the inspiration for Mad Men, Breaking Bad, and The Wire. But even if Peaks isn’t responsible for every important show that came after it, a good case can be made that, had it not aired on network TV to (admittedly short-lived) widespread acclaim, other genre-twisting dramas — from The X-Files to Lost — might never have gotten their chance at primetime. Just shy of 25 years after its debut, Peaks’ DNA can be found all over the storytelling choices in The Killing, Hannibal, and, most recently, Fargo and True Detective. 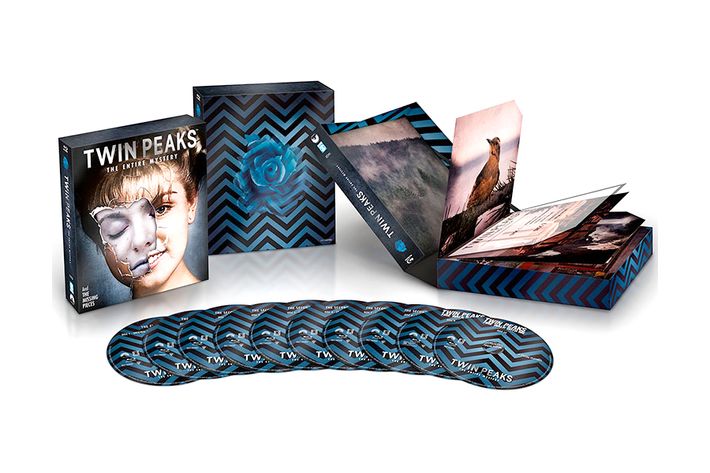 This week’s release of the mammoth Twin Peaks: The Entire Mystery Blu-ray collection — which presents the 30-episode series alongside (for the first time) its 1992 movie prequel, Fire Walk With Me — offers a new opportunity for Peaks fanatics to reopen old wounds and wonder what might have been had the show continued on. While it doesn’t include every nugget of Peaks lore, this set is the most comprehensive release to date and amplifies everything that was memorable about the series: both the good and the excruciatingly bad. Here’s a quick guide to what’s inside, from the obvious to the surprising as well as a few gripes about what’s still missing. 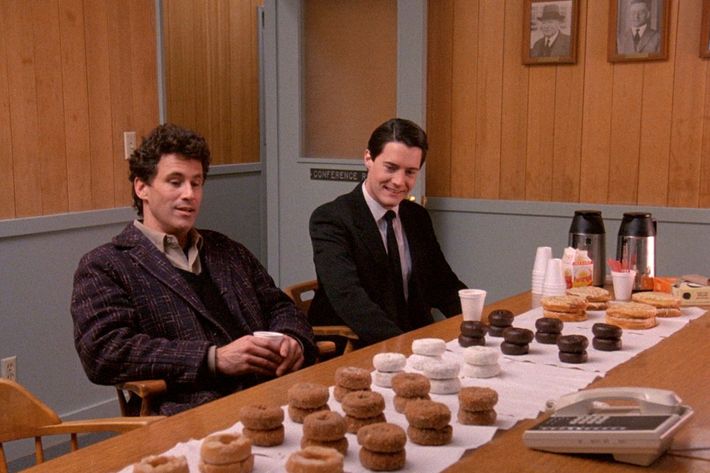 The Old
At this point, praising how things look on Blu-ray is like being impressed by the special effects in a Transformers sequel — looking great is what Blu-ray is for. And of course, Twin Peaks (especially the pilot, which was filmed on location in Washington rather than on a studio set in California) was already a thing of beauty in standard-definition. So it’s no surprise how impressively they’ve been upgraded. The visual makeover even extends to features ported over from the relatively recent “Gold Box” Peaks DVD collection; for example, the “A Slice of Lynch” featurette that reunited the director/co-creator with actors Kyle MacLachlan, Mädchen Amick, and Peaks associate producer John Wentworth has been remastered. Even better, it has been made about 25 minutes longer, and still manages to be more charming than self-congratulatory.

The show itself remains the same one that old-school viewers remember. The first season still stands out as a stunning, altogether odd, and meticulously crafted drama that set an incredibly high bar for itself as it established the mystery of who killed Laura Palmer. The second season, which answered that central mystery early on, still disappoints mightily, a result of creators David Lynch and Mark Frost getting distracted by other projects. Years before fans of The West Wing and Community suffered through the absence of their respective leaders Aaron Sorkin and Dan Harmon, Peaks fans saw a groundbreaking show become an eccentric imitator of its former self, with guest stars and weird digressions diluting what made the show so appealing in the first place. It began to regain its footing creatively near the end of the season, and Lynch directed the Peaks finale, a thoroughly gripping hour that channels the best of the initial episodes and doesn’t get too bogged down by the second season’s more forced plotlines. But the show’s creators knew that a third season was a long shot at best, making the last scene of what turned out to be the series’ finale — with Kyle MacLachlan’s Agent Cooper possessed by BOB, the demonic presence that killed Laura Palmer — an extraordinarily cruel tease. 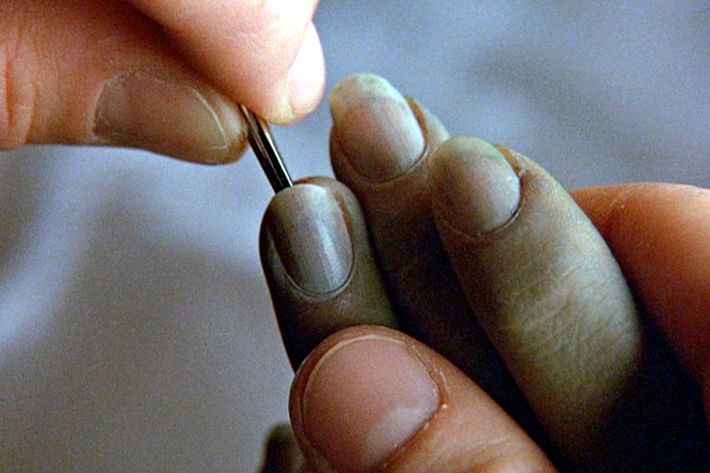 The New
In addition to Fire Walk With Me and a theatrical-cast-and-crew documentary that can’t quite decide if the movie was ahead of its time or a grisly misfire, the set has a couple of notable new features, including a two-part segment reuniting Lynch with series stars Ray Wise (Leland Palmer), Grace Zabriskie (Sarah Palmer), and Sheryl Lee (their daughter, Laura Palmer). The second, larger piece is a round of whisper-light reminiscing about the show, the feature, and the impact of the Twin Peaks legacy. No surprises there, except that Wise may be even cooler than you thought. But the part that has already been widely buzzed about is the ten-minute opening, where Lynch interviews the actors in character as they would be today, with two of the three dead and one still living in Twin Peaks. And even though the segment is diverting, it misses the opportunity to provide some closure by failing to reference Agent Cooper or any of the other characters whose fates were left up in the air.

The most anticipated feature of the bunch is an hour and a half of extended and deleted scenes from Fire Walk With Me, a “holy grail” to fans who speculated that they would make the critically derided prequel better fit into the Peaks oeuvre — and they may have been right. While the theatrical version of Fire is an eccentric horror film punctuated by a lot of incredibly loud screaming (if you have kids or pets in the house, be prepared to ride the volume buttons on your remote pretty hard), most of the additional scenes are of the quirky variety that typified Twin Peaks at its best. A lengthy back-and-forth on why two-by-fours don’t really measure two by four is a personal favorite that might really have leavened the incest, date rape, and murder that are Fire’s bread and butter. But apart from an extra minute (and really, it’s just an adjunct to the series finale, not the film) that gives some hope that Annie (Heather Graham) wasn’t as doomed as she previously appeared to be, there’s nothing here to close the book on the events of the series. 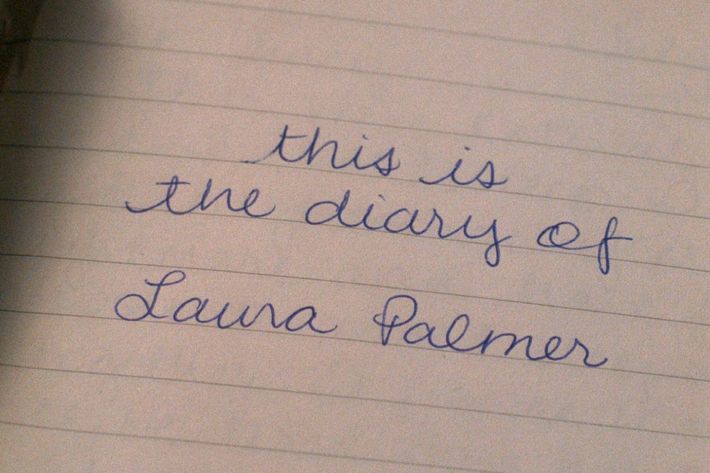 What’s Missing
Speaking of books, it’s a fair guess that the 2011 reissue of the best-selling-in-its-day Secret Diary of Laura Palmer kept that from being included as an extra, but completists will note the absence of other curios, such as The Autobiography of F.B.I. Special Agent Dale Cooper: My Life, My Tapes, and the “Diane …” - The Twin Peaks Tapes of Agent Cooper audiobook.

The Complete Mystery is still going to have some Peaks obsessives unsure whether they can get rid of their earlier versions. Director commentaries, interviews, and script notes that appeared on the initial series collections didn’t make it to the second-most recent version, the Gold Box, and they’re not here, either. And while most people can go a long time without revisiting Gold Box curiosities like the Julee Cruise music video for “Falling” or the Japanese ads Peaks cast members made for canned coffee drink Georgia Coffee, not carrying over gems like Kyle MacLachlan’s 1990 Saturday Night Live monologue (where he “accidentally” reveals that “Shelly the waitress” killed Laura Palmer) and that same episode’s Twin Peaks sketch is a letdown. (Check out Mike Myers dancing and speaking backwards on his knees as the red-suited “Man From Another Place.”)

Also missing — and never yet collected under the Twin Peaks banner, so it was really just an idle hope — are any of the myriad Peaks references on other shows in the ’90s, such as Northern Exposure and The Simpsons, not to mention more recent homages, like 2010’s Psych reunion. But what’s most frustratingly absent here is the long-hoped-for sense of closure. Calling a box “the entire mystery” but not including the intended resolutions to the show’s dangling plotlines stings. Fans don’t need every twist and turn wrapped up, but after almost 25 years, couldn’t they at least tell us if Audrey survived the bank explosion or if the Bookhouse Boys managed to rescue Coop from the Black Lodge or if …?