Chris Pratt is poised to become America’s new favorite celebrity (perhaps even its new J. Law). But who is Chris Pratt, really? Turns out that long before he was Star-Lord, long before he was Burt Macklin FBI, he was just like the rest of us: A dweeby, chubby-cheeked high-school senior with a bad haircut. Reddit user warped_and_bubbling went to high school with him, and today he shared a veritable goldmine of Chris Pratt throwback pics.

As a recipient of the vaunted “Class Clown” title, Pratt clearly cut his comedic chops in the halls and classrooms of Washington State’s Lake Stevens High School (no word on what his fellow honoree is up to these days, although she looks pretty fun):

The redditor who shared the photos writes of Pratt’s high school antics: The one memory that jumps to mind was how good of a moonwalker he was. Seriously, we had one of those pep rally type assemblies once and in the course of one of the “rah-rah” type skits that he was involved in a Michael Jackson song hit and he absolutely nailed it.

Bring this bit to Fallon, please! The story checks out: According to a website associated with Lake Stevens High School, complete with yet another adorable vintage photo, Pratt “helped created a variety of wild and memorable assemblies that quickly became a part of Lake Stevens High School folklore.” Here’s a photo from one of said assemblies, where he appears to be administering to some T-Birds (unclear)?

And here’s him dominating another kid at a high school wrestling match, a skillset he presumably learned from watching Roadhouse: 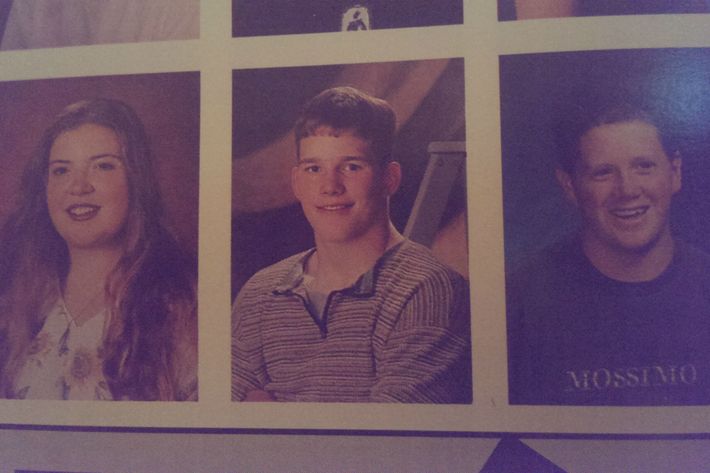 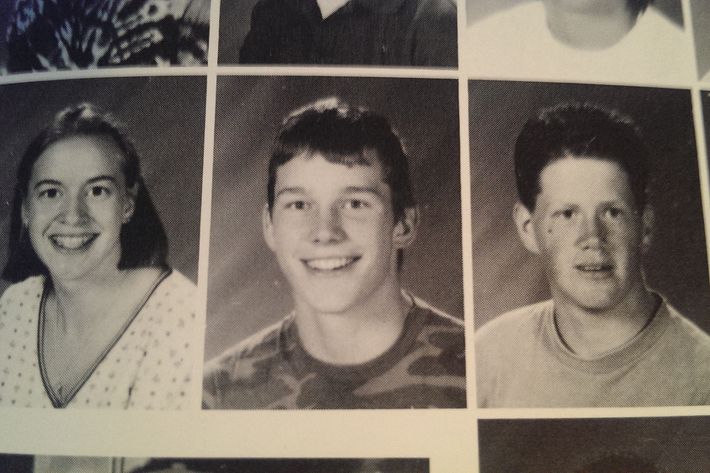 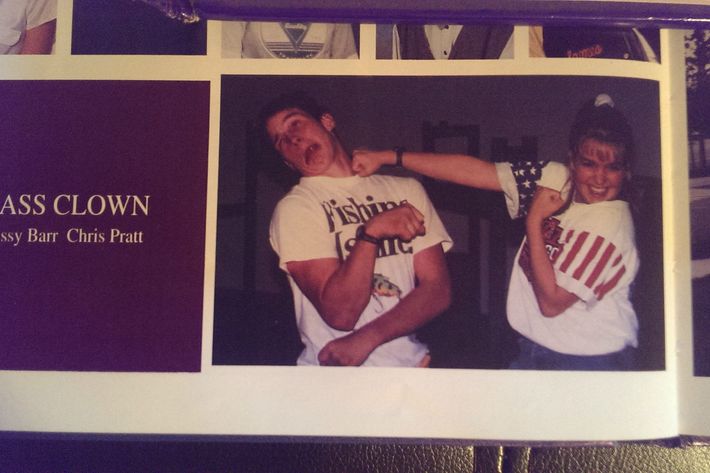 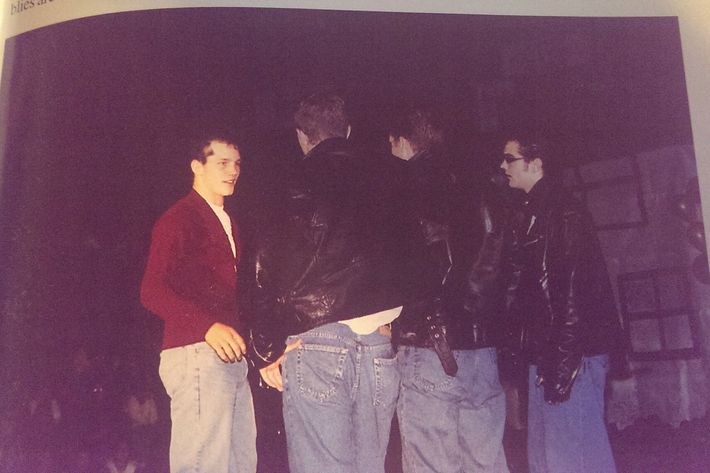 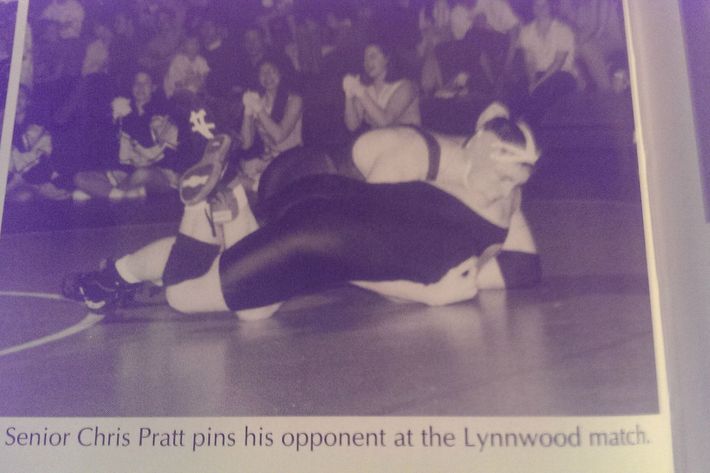 midnights era 3 mins ago
Wait, Is Taylor Swift Just Giving Us Straight Answers? Not like the videogame. Or maybe exactly like the video game?!
surprise surprise 15 mins ago
Ye Thought Wearing a White Lives Matter Shirt Would Be ‘Funny’ He addressed his Paris Fashion Week controversy in an interview with Tucker Carlson.
overnights Yesterday at 10:41 p.m.
Atlanta Recap: Mr. Chocolate and the Black Movie Factory What Van believes will be a quick adventure in a Tyler Perry–esque production turns into a pivotal moment for her as a mother.
theater review Yesterday at 10:00 p.m.
The Revived and Reinvented 1776 Is a Delight, If You Can Stand to Watch It If you’re going to stage this show despite all its problems, this is how to do it.
health Yesterday at 9:32 p.m.
Justin Bieber’s World Tour Is Officially Postponed Until the Spring He previously paused the tour due to facial paralysis caused by Ramsay Hunt syndrome.
overnights Yesterday at 9:01 p.m.
Ghosts Recap: Alberta’s Turn The female-empowerment vibes are at an all-time high over at the Woodstone B&B.
trailer mix Yesterday at 8:02 p.m.
RHOBH Reunion Trailer: It’s Kathy Hilton vs. Lisa Rinna “You are the biggest bully in Hollywood, and everyone knows it.”
under oath Yesterday at 6:46 p.m.
Kevin Spacey’s Sex-Abuse Trial Is Already a Mess Spacey, wearing a slate suit, snow-white shirt, and powder-blue tie, did not appear worried.
jinkies Yesterday at 6:02 p.m.
Mindy Kaling and Constance Wu Are Solving the Mystery of Velma The first teaser for HBO Max’s Scooby-Doo spinoff dropped at New York Comic Con 2022.
good one podcast Yesterday at 5:05 p.m.
How Sam Morril Gets Laughs Between Laughs “It’s almost like a hesi move in basketball. Like, how can I get my jump shot wide open?”
By Jesse David Fox
coming soon Yesterday at 4:53 p.m.
It’s a-Here, Mario! Chris Pratt, look how you massacred our boy.
chat room Yesterday at 4:52 p.m.
John Macmillan Shot Laenor’s House of the Dragon Escape on His First Day on Set “It was a really stormy day, and we were out in the ocean in this massive hundred-year-old boat.”
future trash Yesterday at 4:27 p.m.
John Waters, Pope of Filth, to Direct Adaptation of His Book Liarmouth “Maybe it’s fitting that my novel was shocking enough to jump-start the engine of my film career.”
overnights Yesterday at 4:24 p.m.
She-Hulk: Attorney at Law Recap: Murdock & Walters Charlie Cox’s Daredevil returns to the MCU — and begins flirting immediately.
best of 2022 Yesterday at 4:00 p.m.
The Best Video Games of 2022 (So Far) It’s been a really, really, really full year.
coming soon Yesterday at 3:45 p.m.
Glass Onion: A Knives Out Mystery Headed to Theaters After All But only for a week.
highway to hell Yesterday at 3:01 p.m.
The Live-Music Industry Is Broken Supply-chain issues, mental health crises, positive COVID tests. As artists continue to struggle, is any of this even worth it?
vulture guides Yesterday at 3:00 p.m.
A Grey’s Anatomy Catch-Up Guide, No Matter How Far Behind You Are Everything you need to know before jumping back in.
By Maggie Fremont
movie review Yesterday at 2:50 p.m.
Tár Brilliantly Undoes an Ego Monster of an Artist Cate Blanchett is toweringly great as a famous conductor who meets a very public downfall.
buffering Yesterday at 2:26 p.m.
It’s Time to Start Worrying About Peacock Can the streaming service come back from the dead?
More Stories