Did you see Guardians of the Galaxy this weekend? (You did.) Did you totally adore it? (You did!) Once upon a time, Marvel’s space-set adventure-comedy was regarded as an expensive risk; now, though, it may be the company’s most lucrative new franchise. It’s the movie everyone wants to talk about … and there’s one moment in particular that seems to be dominating the conversation, a moment that’s got to be considered the best part of Guardians of the Galaxy. Let’s discuss it!

It’s here where we must warn you that this post contains SPOILERS. We’re going to discuss some end-of-movie stuff, people! If you haven’t seen Guardians of the Galaxy yet, don’t read any further. You wouldn’t understand what we’re talking about, anyway.

Dancing Baby Groot is the best part of the movie for several important reasons:

3. Nearly every superhero movie feels forced to end on a significant moment that sets up more adventures, and while Guardians does its fair share of sequel-teasing in the scenes just before this one, the notion of closing the movie on a silly-cute throwaway moment between two supporting characters — neither of whom even speaks in the scene — is exactly why this movie works so well. By the end of the movie, you really like these characters; at the end of the Dancing Baby Groot scene, you realize you loved them all along.

This, then, is the clear choice for Best Part of Guardians of the Galaxy, but there was an abundance of runners-up! Here are just a couple of them, in no particular order (but feel free to nominate one of your own):

Glenn Close’s wig. Rarely has a $170 million sci-fi movie directed by a straight man included something this campy. 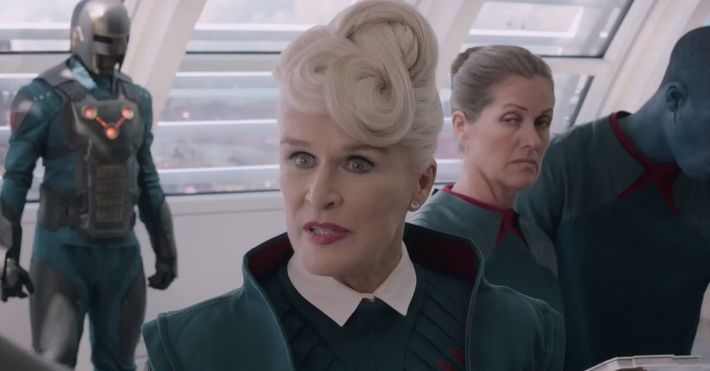 The opening song, “I’m Not in Love.” The classic-rock soundtrack to this film is pitch-perfect, but it’s the very first tune that truly sets the tone: It’s as ethereal and surprisingly yearning as the movie we’re about to see.

The realization that Rocket didn’t need that prosthetic leg.

Chris Pratt’s expression in the third act when a baddie finally calls him by his preferred nickname, Star-Lord. Of all the comedic runners threaded through this film, this is the one with the biggest (yet breeziest) payoff.

The split second near the end of the film when Star-Lord sees a vision of his mother reaching out to him. How rare is it to see an action movie that fills its third act not simply with bigger and bolder action beats, but escalating, emotional character moments, too?

The characters actually like each other. The Guardians don’t get along at first, but over time, they’re willing to put their lives on the line for one another, and it’s a genuinely moving thing when Star-Lord gives the dying Gamora his helmet or Groot protects the party with a self-sacrificing embrace during the spaceship’s crash-landing. It all comes to a head in the final battle, where Star-Lord’s fellow Guardians link hands with him in an effort to shoulder the ravaging power of the Infinity Stone, then use that marshaled force against the evil Ronan: They literally defeat the bad guy using friendship. That’s such a gloriously uncynical idea, and to make it the cornerstone of a massive franchise-starter populated by sarcastic degenerates is unexpected and affecting. So many comic-book movies focus on a lone hero who’s forced by grim fate to go it alone. Guardians of the Galaxy realizes that you only get by with a little help from your friends.

last night on late night 18 mins ago
J. Smith-Cameron Should Have Thrown Two Drinks in Kieran Culkin’s Face She employed a three-strike rule.
overnights 3:08 p.m.
Harley Quinn Recap: Swamp Cling It’s not easy being green … or, in Ivy’s case, accessing the green.
ask an expert 2:57 p.m.
Where Do Georgia Music Festivals Go From Here? Music Midtown in Atlanta was reportedly scrapped over a ruling that allowed guns during events on public property.
buffering 2:33 p.m.
Why Disney+ and Hulu Just Got a Lot More Expensive Less bang for more bucks.
behind the seams 2:30 p.m.
How Mrs. Harris Goes to Paris Captures Love at First Sight (With a Dress) Here, dresses act as scene partners and spark character growth, joy, resolve, and grief — which is a lot of weight to put on some tailored fabric.
By Rebecca Alter
overnights 2:30 p.m.
The Real Housewives of Dubai Recap: Diamonds Are Forever Off we go on yet another doomed Bravo girls’ weekend.
the law 2:29 p.m.
Britney Spears’s Lawyer Calls Kevin Federline’s Videos ‘Cruel’ Mathew Rosengart said Federline “undermined his own children.”
buzz! buzz! 2:24 p.m.
Van Lives! And Lauren Ambrose Will Play Her on Yellowjackets Season Two And Liv Hewson has been upped to a series reg. 🐝
overnights 2:05 p.m.
American Horror Stories Recap: Blood and Pus This episode made our recap writer barf!
vulture 10x10 1:04 p.m.
The Plant Puzzle 7-Down, Four Letters: Half of a Jim Carrey movie?
underrated 1:03 p.m.
The Surprising Queer Joy of D.E.B.S. Jenny Hagel breaks down why the 2004 comedy deserves more fans.
By Bethy Squires
found in translation 1:00 p.m.
The Historic Power of Prey Is in Your Ears “Finally, the light came on,” the film’s Comanche language expert says. Then came the hard part.
whodunnit 12:37 p.m.
Who Killed Bunny Folger on Only Murders in the Building? An assessment of the ten likeliest suspects.
into it 12:14 p.m.
Damon Lindelof Knows When to Wrap Up the Party “People don’t want things to end,” says the Lost and Watchmen showrunner. “I do.”
vmas 2022 12:01 p.m.
The MTV VMAs Stage Will Get Country Thanks to Kane Brown The lineup adds the first male country musician to perform on the show.
overnights 11:48 a.m.
The Resort Recap: The Second Half Is the Heartbreak “Do not go to pasaje. Go home.”
last night on late night 11:15 a.m.
Madonna Is Plotting Her Takeover of The Tonight Show First, the host’s chair. Next … the drum set?
essential roles 10:43 a.m.
Jon Bernthal Will Surprise You The best performances from Hollywood’s preeminent primal screamer.
overnights 10:30 a.m.
Locke & Key Series-Finale Recap: The Final Door This is the kind of show that had to give its characters a happy ending, right?
chat room 10:05 a.m.
Jamie Bower, Lord of the Underworld, Loves the Dark The Stranger Things actor’s brand-new song, “I Am,” isn’t too far from Vecna, but that’s not by design.
More Stories