On August 15, The Expendables 3, the latest installment of the elderly ensemble action series, muscles its way into theaters. Which crusty star has the most fake kills to his credit? The most wives? A Who’s Who of the action series. 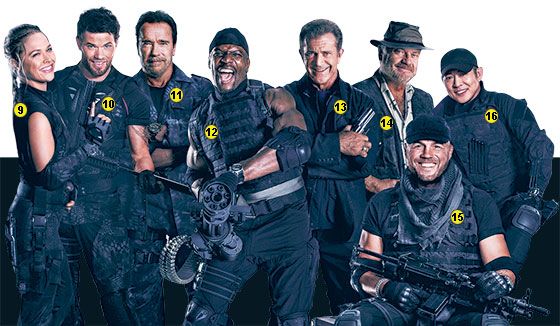 11. Trench Mauser
Arnold Schwarzenegger, 67
Former associate of Ross’s who formed his own rival team of mercenaries.

The Deadliest Expendables
Which Expendable has killed the most people onscreen in his career? 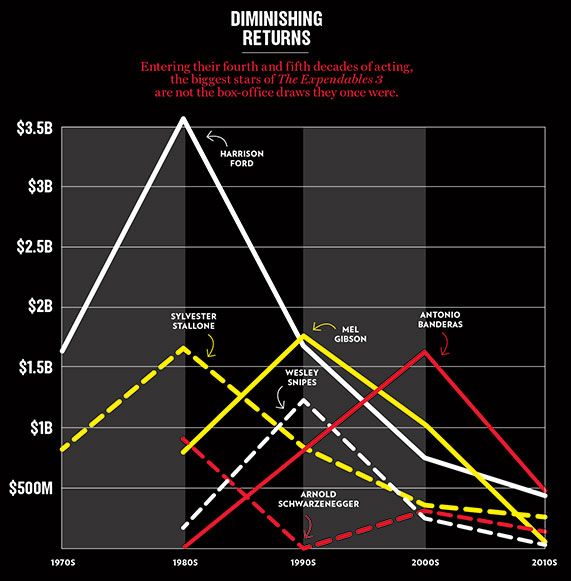 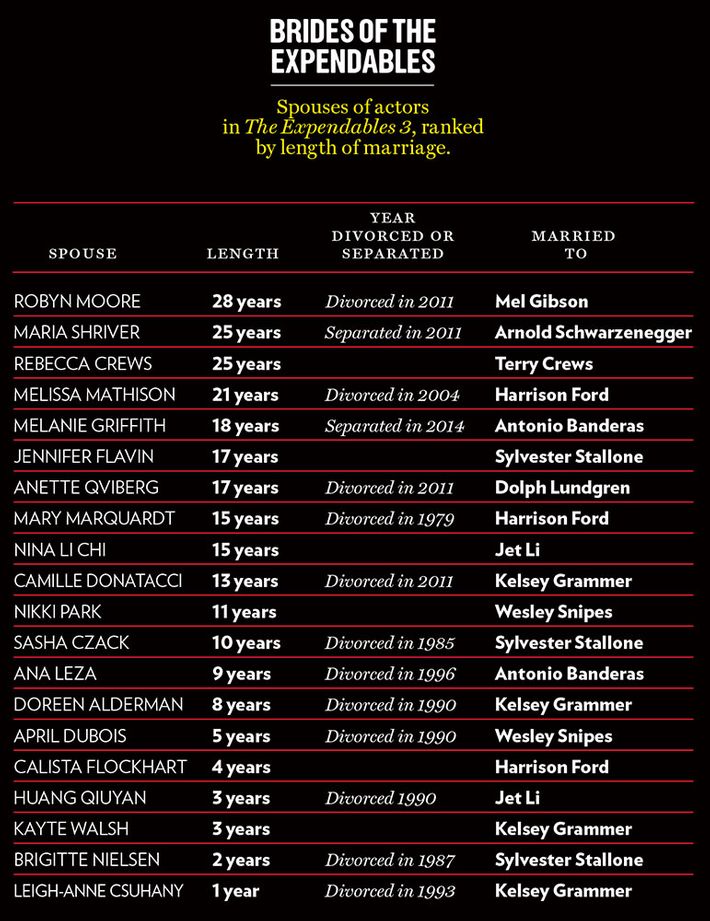 The Really Expendables
Who missed out on a chance to be an Expendable?

Wesley Snipes:
The role of Hale Caesar in the original film was reportedly written for him, but he had to bow out because he was in prison for tax evasion. (He finally appears in Expendables 3.)

Forest Whitaker:
He was reportedly offered the role of Caesar next but dropped out because of scheduling issues.

Curtis “50 Cent” Jackson: With Whitaker gone, he signed up for the part of Caesar but was reportedly replaced by Terry Crews after fans revolted.

Steven Seagal:
He was offered a cameo in the first film but passed because “I just didn’t like some of the people involved.”

Kurt Russell:
He was offered a role in the original movie but said no because doing it would have been “like looking backward.”

John Travolta:
He was offered a role in Expendables 2 but reportedly “just didn’t go for it.”

Jackie Chan:
He was cast in Expendables 3 in 2012 but eventually fell out because of a scheduling conflict.

Milla Jovovich:
She declined a role because she reportedly wanted to shed her image as an action star.

Clint Eastwood:
With Stallone reportedly interested in casting him for Expendables 3, Eastwood was asked by a reporter if he’d consider it. His answer: “Probably not.”

*This article appears in the August 11, 2014 issue of New York Magazine.

Cannes: Breaking Down the Tank-Riding Style of the Expendables 3 Cast

+Comments Leave a Comment
The Expendables’ Character Names Are Insane