The TMNT movie topped the box-office charts this past weekend, but it’s only the latest in a long line of Turtle Power across all media. One of the most fondly remembered tie-ins is the original Teenage Mutant Turtles game for the Nintendo Entertainment System. Even after 25 years, it’s still charming in its simplicity. Here’s why.

The introduction.
Any game that introduces and defines its characters by the weapons they wield means business. It’s not wasting any time on this one. “Hello, my name is Leonardo. Don’t really care what your name is. Would you like to see my very large and incredibly sharp sword? No? I will show it to you anyway.”

The healing power of Pizza.
If the Ninja Turtles need to refill their health, they eat pizza. So, to recap: Pizza makes you healthier. That’s also how it works in real life.

April’s constant support.
April O’Neil is the nicest. It’d be kinda weird if the Turtles didn’t have April’s support, but she still wants to let them know. Repeatedly.

Good to know! Thanks, April!

It’s succinct.
TMNT respects your time. In fact, you can beat the entire game in about 25 minutes. Given size constraints on old NES cartridges, there wasn’t a lot of room to be verbose. After defusing multiple bombs and stopping a potentially deadly catastrophe, Raphael offers this concise summary of his accomplishments. (Also, there’s this part where one of the turtles knocks on the door to their own apartment.) 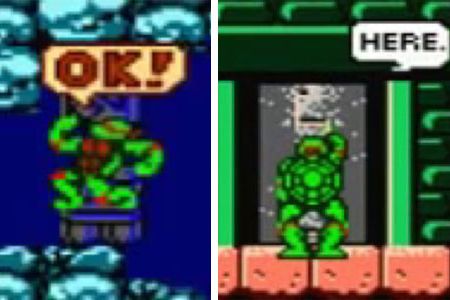 The turtle truck.
There are a few things that make this vehicle great: (1) It shoots missiles; (2) Anything that it touches explodes — even people. I don’t know exactly how that, happens and I have no interest in finding out.

The idiot enemies.
Again, you can’t really fault an NES game for having poor AI, but look at this Foot Clan soldier.

Great work! In addition to the standard Foot Clan, there were other great, generic enemies: frogs; bomb-dropping robot balloons; dudes who were apparently just on fire as if that were no big deal.

The Turtles blimp.
The TMNT branding is very on-point throughout this game. Screw stealth attacks — the Turtles would rather attack Shredder head-on, in a blimp that has their name in huge letters across the side. That’s a gutsy move. We’ll see how that shakes out.

Shredder’s death.
When Shredder dies, he melts and burns. That’s a cool way to die.

The ending.
When you beat the game, Splinter turns into some old human dude? I always just assumed Splinter became a giant rat in the same way that the Ninja Turtles mutated from normal turtles. I guess not. Is Splinter secretly a guy who looks like John Wayne cursed to walk the Earth as a giant rat?

April knows how to throw a party.
Hell yeah, April. 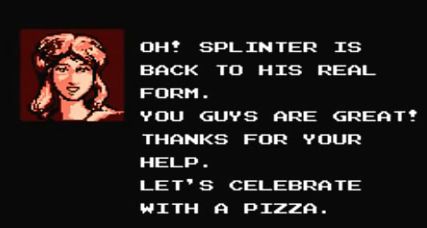